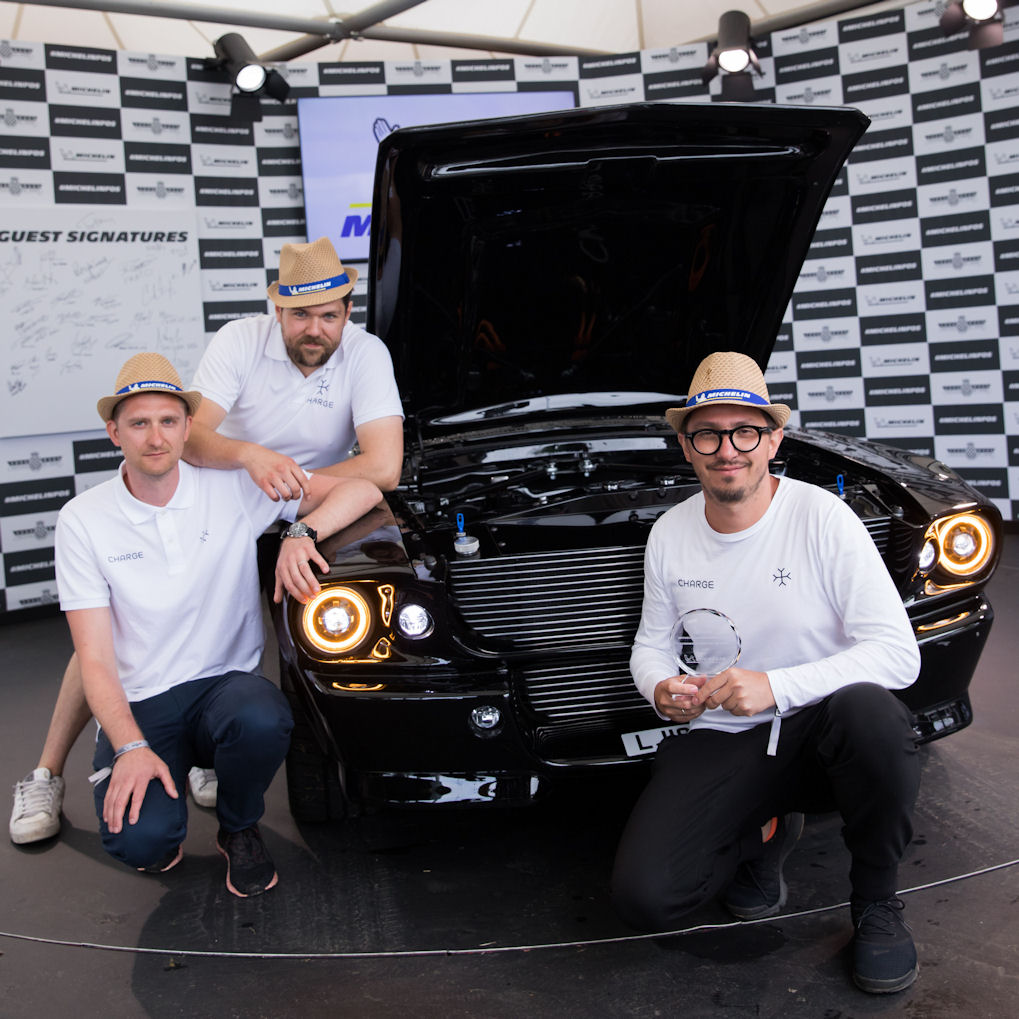 The Michelin Supercar Paddock has concluded its eighth year at the Goodwood Festival of Speed with the Charge Auto Mustang confirmed as the 2019 Showstopper of the Festival.

The result is a first for the paddock, which has never had a pure electric vehicle taking the plaudits. A shortlist of 12 supercars was compiled through a Michelin UK Facebook poll, with the top car from each of the first three days going into the final on Sunday. The Charge Auto Mustang was up against the Ferrari 488 Pista and 2018’s Michelin Showstopper of the Festival, the Apollo Intensa Emozione.

The rebirth of the De Tomaso took the Goodwood Festival of Speed completely by surprise, as the team unveiled a unique and unexpected P72 model on Thursday morning. One of the most exceptional launches of the festival prompted Michelin to grant the car a Reveal of the Festival trophy – a brand-new accolade to mark one of the most remarkable stories of the event.

Marking its 60th anniversary with a car that pays homage to its classic roots in the motorsport and automotive worlds, the De Tomaso P72 took the world’s media and event spectators by storm. The sleek exterior sculpting was matched by the exposed, mechanical interior that used polished copper across the dash in addition to stitched leather, all designed to hark back to a previous era of De Tomaso creativity.

The 2019/2020 WEC Porsche 911 RSR was unsilked and revealed on the start line before being given a world premiere on the Michelin Supercar Paddock stand on Saturday afternoon. Drivers Gianmaria Bruni and Jorg Bergmeister helped talk through the car and its updates ahead of its first outing at the season-opening round of WEC at Silverstone on 1 September.

The Ford GT MkII also debuted on the Michelin Supercar Paddock stage, while the Michelin Main Stand saw the UK and public debut of the all-new Koenigsegg Jesko.

In its new location next to the Goodwood start line, the Michelin Supercar Paddock had more supercars from world-renowned marques and unique start-ups, boasting more car content than ever before.

Chief Showstopper judge and television commentator, Tim Harvey, said: “Charge Auto’s Mustang took everyone by surprise at the Festival this weekend. It’s not just the unique aspect of taking a true classic Mustang shape and adapting it to apply to an ever-evolving modern world, but more the fact that the team have pushed the boundaries in every single way to make this special car happen, which has made it a stand out. A special mention has to go to the team from De Tomaso, stunning the world with the unexpected debut of the P72 here at Goodwood. The entire team truly deserved our new Reveal of the Festival accolade.

“The Michelin Supercar Paddock had something for everyone this year. Plenty of debuts, supercars and interviews on the Michelin Live Stage and with the drivers before the Supercar Run. Congratulations De Tomaso and Charge Auto.”

Blackcircles founder Welch nominated for TIA board of directors election