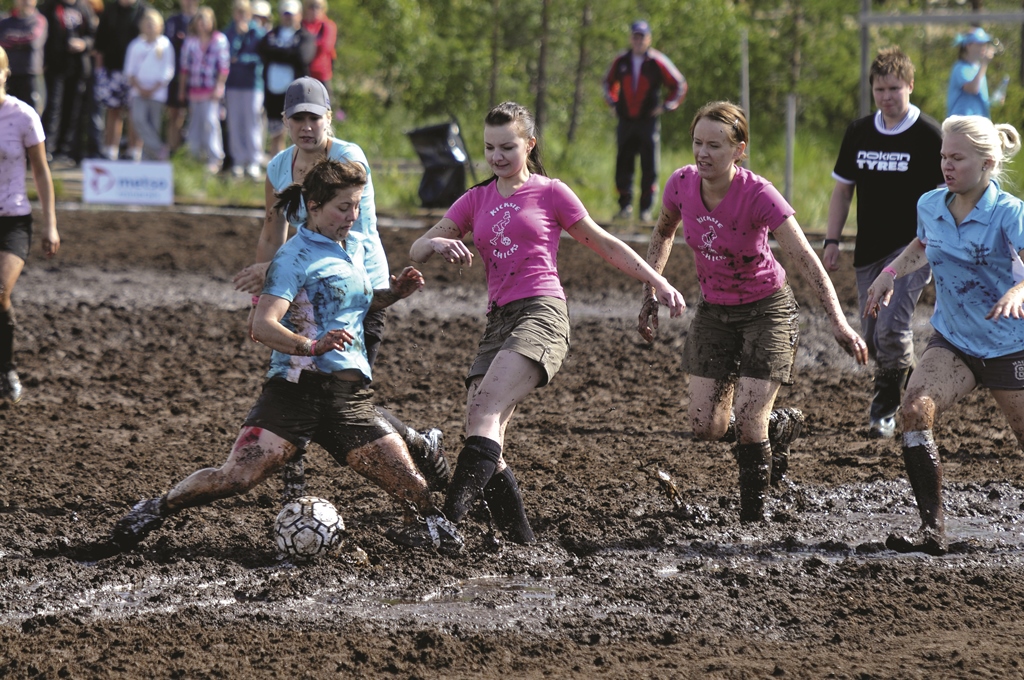 This weekend either France or Croatia will be taking the World Cup trophy home, and football superstars such as Ronaldo and Messi will have to be content with watching the action on television. But should their hankering to take part in a football world championship prove strong, there’s still time for them to travel to Hyrynsalmi, Finland. Starting today, this sparsely populated patch of nowhere is hosting the Nokian Tyres Swamp Soccer World Championships.

But how would these big names fair in the swamp? Not only does swamp soccer require players to be in good physical condition, the field bears little resemblance to the sleek grass found in football stadiums. As a sport, swamp soccer is aptly named: you play football in the mushy swamp. The only similarities with conventional football are the ball, shape of the field and the goals at each end.

The Nokian Tyres Swamp Soccer World Championships are played out on 20 pitches, each 35 metres wide and 60 metres long, each with its own unique characteristics in terms of sogginess. The six-aside teams push themselves in the swamp for two ten-minute halves. Each team plays four to six matches over the weekend, and the five series total nearly 1,000 matches.

The sport requires great physical fitness, as moving thigh-deep in the swamp is no walk in the park. Falling down is part of the sport but diving certainly isn’t: when you fall down, you get up and keep playing. In order to succeed in swamp soccer, a team must be able to withstand extreme conditions and have the will to win, great team spirit and, most importantly, a sense of humour. But how would the great footballers Messi and Ronaldo fare?

A slender body and long legs are advantages in swamp soccer. The best players are like a moose in the swamp: springy with thin legs. Messi and Ronaldo definitely have the strength but they’re not ideally built to become champions in swamp soccer, comments Kimmo Kyhälä, organiser of the Nokian Tyres Swamp Soccer World Championships.

The Swamp Soccer World Championships take place at the Vuorisuo bog in Finland today and tomorrow. A total of 165 teams have signed up for this year’s World Championships. With more than 2,000 players expected, the event has grown slightly larger from last year. The physically very demanding sport brings swamp soccer enthusiasts particularly from Russia, Sweden and Germany to Finland, the land of a thousand bogs. In addition, international teams feature players representing more than ten different nationalities.

The first National Swamp Soccer Championships took place in Hyrynsalmi, Finland in 1998. In the following year, the event had grown into the European Championships, and as of the year 2000, it has been a World Championship event.

Although the teams are serious about winning the championship, Nokian Tyres Swamp Soccer World Championships is, overall, a relaxed and fun event. Nokian Tyres has been the main partner and title sponsor of the event for more than a decade.