MWheels to work with DfT to improve CV wheel safety 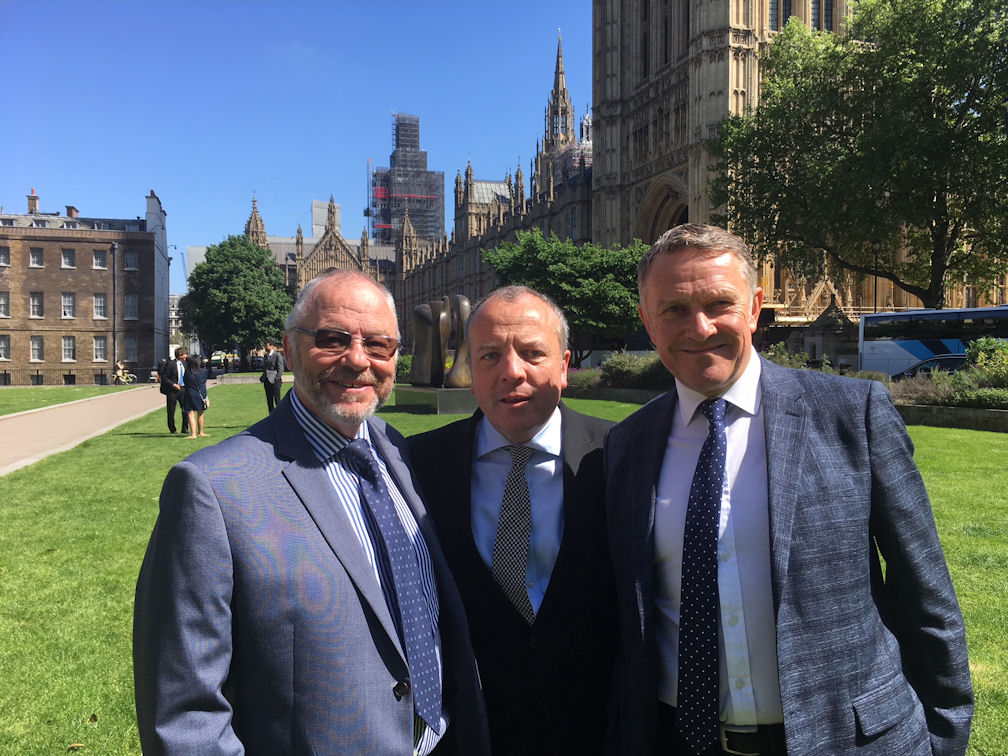 (l-r) John Ellis, CEO of MWheels; Mike Kane, MP for Wythenshawe & Sale East and Matt Mardle, COO for MWheels ahead of their meeting with the DfT

Negotiations to rectify the Department for Transport’s apparent failure to incorporate European Union Directives 2014/45/EU and 2014/47/EU into the wheel-related section of the new Heavy Goods Vehicle Inspection Manual has yielded a positive result for MWheels. The commercial vehicle wheel specialist shares that following a meeting with the DfT, DVSA and Parliamentary representative Mike Kane MP on 17 May, the DfT “has agreed to work with MWheels to investigate ways in which the Heavy Goods Vehicle Inspection Manual’s section on wheels can be enhanced to improve vehicle safety.”

During the meeting, four distinct actions were identified to begin the process of cooperation. Initially, MWheels will produce a short report which highlights its concerns with the new UK testing regime in relation to EU Directives 2014/45/EU (Periodic) and 2014/47/EU (Roadside), emphasising where it believes the changes do not reflect the newly imposed minimum safety requirements as required by Europe.

When speaking with Tyres & Accessories for our May magazine’s wheels feature, Matthew Mardle, chief operating officer at MWheels, said he was “shocked” by what the January-released draft HGV Inspection Manual contained – or rather, didn’t contain. Fully conversant with the EU Directives thanks to eight years of campaigning for improved commercial vehicle wheel safety, MWheels expected the DfT to effectively introduce a ‘copy and paste’ of the Periodic (Directive 2014/45/EU) and Roadside (Directive 2014/47/EU) documents. Instead, scant trace of the EU Directives was to be seen in the section pertaining to commercial vehicle wheels and hubs; a careful comparison with the existing HGV Inspection Manual was required to spot any changes.

Further measures resulting from the meeting including MWheels’ offer to share its detailed technical information and laboratory research findings on the life-shortening effects of non-circumferential hubs on CV wheels, which it would like the DfT to use for an educational campaign with fleet operators who are not aware of the situation. In addition, it has requested a joint research project to start gathering important evidence on operational vehicles to see how many trailers do or do not conform to the UK and EU testing standards. And to ensure the cooperation maintains a healthy momentum, a meeting will be scheduled at the start of autumn for all parties to reconvene.

“We now understand why the EU Roadworthiness Directives were not introduced in ad-verbatim, it is up to each Member State to decide on its own testing regimes to meet the new minimum EU standards, but we believe there are still flaws in the updated UK approach,” said John Ellis, chief executive of MWheels. “Within the discussions the DfT invited us to work with them to uncover solutions to certain problems, such as ‘wheels not marked with a load index or load marking must be assumed to be capable to carrying the axle weight’, to research what can be introduced for the betterment of operational vehicle safety.

“The positive discussions very much mirrored those we have enjoyed with the EU back from 2012, and we will again share our detailed technical information so that answers can be found which are quick and simple to enforce without putting extra operational or financial burden on the fleet operator.”

MWheels’ eight-year CV wheel safety campaign saw major input into both EU Roadworthiness Directive Periodic and Roadside documents, which were fully implemented by all 27 Member States on 20 May 2018. The new European law states ‘compatibility between parts and components, such as between wheels and wheel hubs, should be treated as a critical safety item and should be checked during roadworthiness testing’.

Additional legislative text includes several visual wheel inspection prerequisites and that ‘wheel size, technical design, compatibility or type not in accordance with the requirements [laid down by type-approval at first registration or first entry into service] and affecting road safety’ will be classed as a major defect.

Under the new inspection regime ‘minor’ deficiencies should be addressed but no retest is required, ‘major’ problems will require a retest and ‘dangerous’ issues may see the Member State prohibit the use of the vehicle on public roads.

The new legislation also brings into context a number of minimum essential requirements that need to be stipulated when purchasing wheels, and furthermore the key roles that will be played by fleet managers and product purchasers.

MWheels’ white paper – Evaluating commercial vehicle wheel safety – how to keep safe and stay compliant – is still available to download here. The interview with Matthew Mardle that appeared in the May 2018 edition of Tyres & Accessories magazine can be read here.

Tariff fightback? What importers and associations are doing in response to...