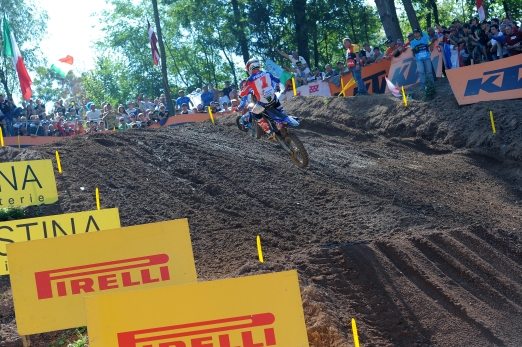 The 1986 edition of the Motocross of Nations marked the beginning of the modern era of motocross, and 30 years later the MXoN was back on the historic ‘Mottaccio del Balmone’ track in Maggiora, attended by more than 40,000 fans on the hill at the foot of the small town in Piemonte. The national teams selected three riders each to compete for the prestigious ‘Chamberlain Trophy’. On a track characterized by a medium-hard soil, Pirelli’s riders fitted the Scorpion MX32 Mid Soft that, both front and rear, and the tyre manufacturer said it demonstrated their high level of performance.

Riders equipped by Pirelli dragged their teams onto the podium after some dramatic races. France, with 29 points, won for the third year in a row while the Netherlands finished second by just one point. The USA team grabbed the last step of the box and Belgium was fourth overall.

Romain Febvre, who won the first race and was fourth place in the third, was the best French rider on the day. Jeffrey Herlings and Glenn Coldenhoff obtained the best results for the Dutch team, with the freshly crowned MX2 champion in his debut aboard the 450 winning the third and final moto.

Team France’s third consecutive MXoN was also sealed with the help of another Dunlop rider, Gautier Paulin who rode in all three races on his Honda. Dunlop-shod bikes competed in each of the top six teams, while six out of nine of the riders’ caps were the iconic yellow sporting the Dunlop ‘flying D’.

The all-Dunlop USA team claimed victory in race two with Jason Anderson (Husqvarna), but a freak injury, when a back-marker landed on him after taking the finish jump ruled him out of the race three leaving Cooper Webb (Yamaha) in sole charge. The deciding race was one of the most closely fought in many years, with four teams still in strong contention right to the last lap. Team USA was looking to be the likely victor until Webb made a small mistake allowing France’s Febvre through. Webb finished the race in tenth dropping them to third while Team Netherlands, including Dunlop’s Brian Bogers (KTM) took second place.

All Dunlop riders used Dunlop Geomax MX3S front and rear. Eddy Seel, Dunlop MX race coordinator, added: “Injury has prevented us showing our strength in MXGP this year but the results here prove that our tyres are capable of winning at the highest level, with a wide range of riders and manufacturers. The MX3S performed very well as it did last year, and indeed as the MX11 did in Kegums on sand in 2014. We would like to give a big thank you to all our teams and riders, but also to our own Dunlop team from the USA and Italy who helped our Nations get these results.