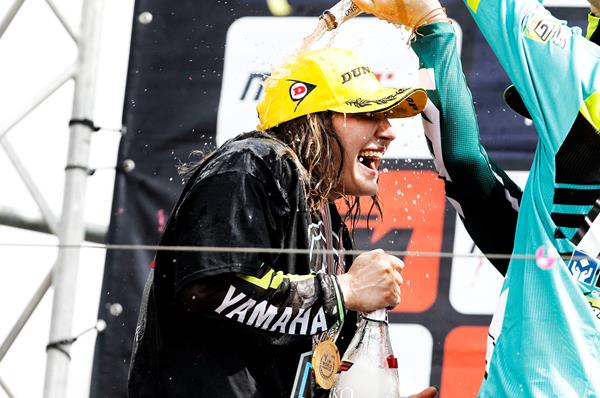 Kiara Fontanesi prevailed in the closest and most competitive FIM Women’s Motocross World Championship (WMX) for several seasons. The championship was claimed at Loket in the Czech Republic, with Fontanesi winning the first moto and finishing third in race two on her Yamaha, fitted with tyre supplier, Dunlop’s Geomax MX32 front and MX52.

Eddy Seel, Dunlop MX race coordinator said: “We are very happy for Kiara. She rode very well this weekend and if she wasn’t riding for the title could have won another grand prix this weekend.”

Fontanesi led the first race from start to finish but race two was a tougher battle with Meghan Rutledge doing everything she could to take the win she needed as a minimum to claim the title. Ultimately it was Livia Lancelot that won the day with Fontanesi riding a wise race two with the title as goal to clinch the gold plate. She was only outside the top three in two of the twelve motos. Her 2014 record includes four moto wins, one grand prix victory and four second place finishes.

In MXGP, Monster Energy Kawasaki Racing Team’s Gautier Paulin rode strongly on his return from injury to reclaim two of the championship positions lost while out with injury. Without hitting the gate at the start of the second moto, the Frenchman could easily have been on the podium. Instead he took fourth place having finished sixth in the first race and then making his way from last to sixth in race two. His team-mate Steven Frossard finished the event in sixth with Team HRC’s Max Nagl in eighth after being classified fourth in race one and 17th in the second after an early crash.

Loket also held the penultimate round of the all-Dunlop Honda 150 European Championship. Britain’s Albie Wilkie won his fourth race and third consecutive Grand Prix and now has a ten point lead going into the final round in Lommel, Belgium.

“Gautier also did well with fourth place on his return. His goal was top-six so he was happy with his results and we hope for more strong races next weekend from all our riders,” concluded Seel.