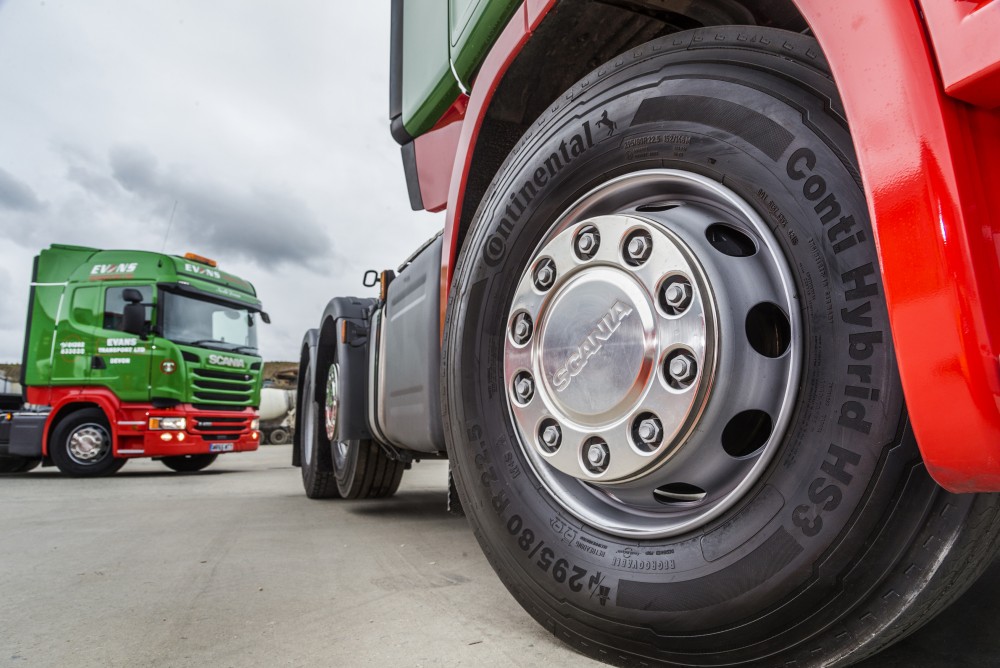 ContiPressureCheck systems will be fitted across the Evans Transport fleet

Evans Transport is to introduce Continental Tyres’ ContiPressureCheck system into its fleet. The 150-truck, 220-trailer fleet said that early trials have shown safety and economy gains from installing the system.

Nigel Evans, managing director of the family-owned Bideford firm, runs an eclectic mix of bulk tippers for aggregates and animal feeds, tractor/trailer combinations for general haulage – as well as with MOL for everything from forestry products to brick and block work. There are also rigids and tractors for its Palletforce pallet network duties and concrete mixers to service its own concrete plant.

The fleet grew in size and complexity when the company acquired Seymour Transport in 2009, an action that instantly spread its operating interests beyond the south-west into both Kent and Yorkshire. The two companies still run largely independent of each other, but there are obvious back-office management synergies that include a specialist tyre manager, Lee Franks. Franks visits each site weekly, assessing tyre conditions and reporting back to a director of the business. His role is a clear indication of the importance Evans Transport places on tyre performance.

Evans himself says, “Tyres impact directly onto any haulier’s bottom line: buying them; repairing them; lost performance through wear and tear; lost fuel economy through running them badly-inflated; the costs of down-time through roadside punctures; or, worse still, accidents caused by tyre failure. I’m genuinely astonished some operators still leave matters solely to driver’s routine checks and six-weekly inspections. Offer people the chance to save a tiny fraction on fuel and you have their immediate attention, but offer them potential savings on tyre wear and tear, which can have an impact right across the whole operating spectrum, and you get nowhere near the same levels of interest.” Evans Transport has had a relationship with Continental Tyres for 25 years, but trials over the past 18 months, prompted by the arrival of new equipment already shod with Continental tyres, has seen a major re-awakening of interest in the brand. “Our local Continental contact has done a great job,” says Evans. “We were running a number of drive, steer and trailer axle tyres on Continental, including their new Hybrid HT3 tyres where possible, on a number of vehicles. She then persuaded us to trial the ContiPressureCheck system as well, and we are really seeing the benefits.”

Evans says the system has already saved “a good number” of tyres, on the tipper fleet especially, with ContiPressureCheck alerting his team to slow punctures that could otherwise have gone unnoticed until the tyre was damaged beyond repair. With its own eight-bay workshop facility at the Bideford headquarters, Evans Transport fits the system itself, including the in-cab monitor that alerts drivers to potentially dangerous and costly pressure changes.

“Safety and economy are both about a great many factors, but tyres are certainly one of the major ones. We continue to run extensive tests on a range of tyres, everything from new through to remoulds, but, whatever we fit, monitoring pressure is key to ensuring we are doing the best we can. It keeps rolling resistance levels spot on for economy and flags up potential safety issues before they can become real problems” says Evans.

The company intends to roll out ContiPressureCheck across an increasing percentage of the fleet as new vehicles come on and wherever current vehicles require it. The plan also calls for linking it to the Masternaut telematics system being introduced to the fleet. Additionally, Evans is considering activating the Automatic Trailer Learning function, which allows any unit to hitch up to any trailer and immediately show all tyre pressures on the trailer.