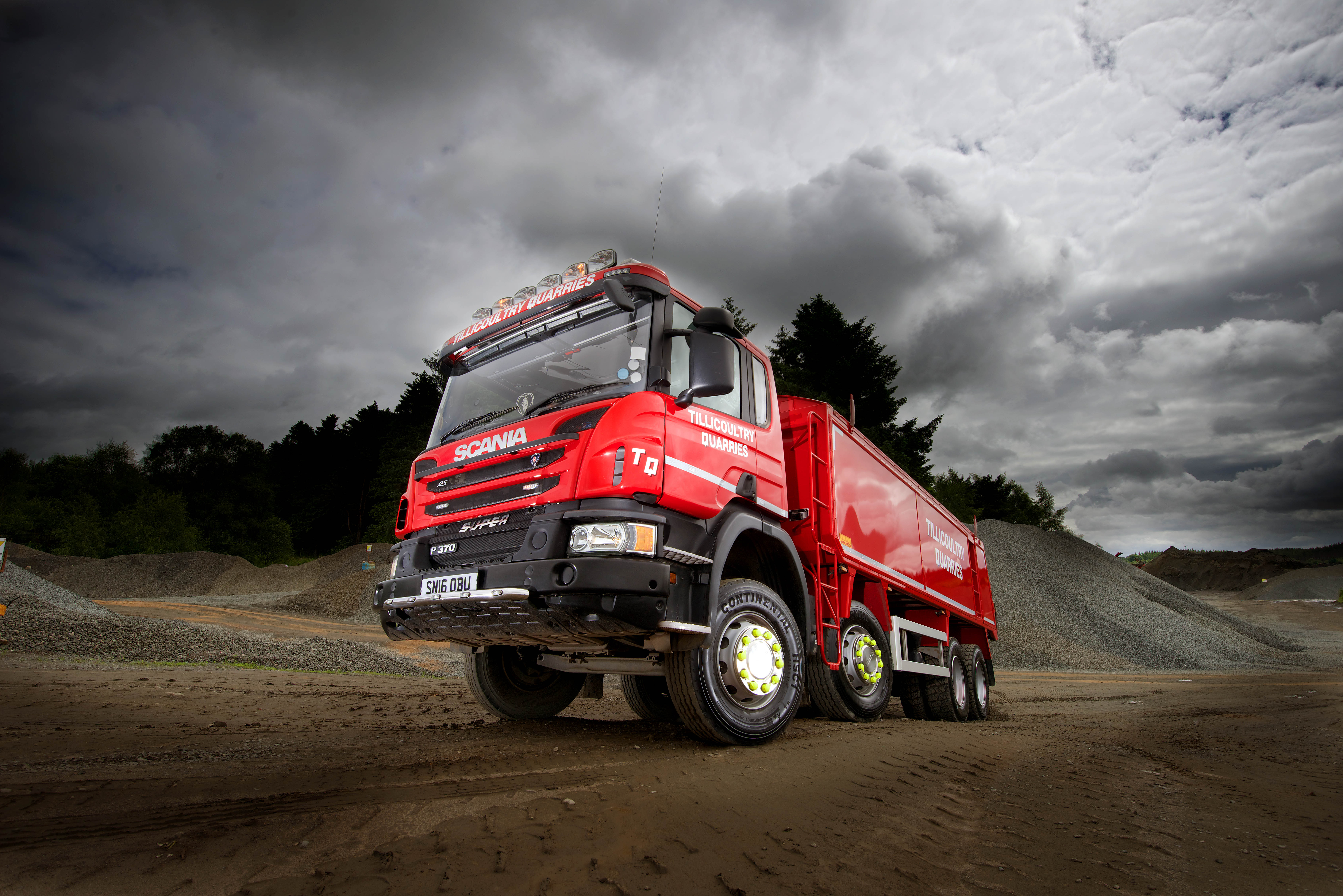 While its latest US acquisition gives an indication of Conti’s future fleet strategy, the manufacturer has also been boosted by recent European endorsements. Scottish quarrying and supply company, Tillicoultry Quarries, implemented a Continental construction tyres only policy following several months of practical on-the-job testing. Speaking from its company’s Kincardine site in Fife, Craig Wilson, site & transport manager, said: “For a long time we had run a combination of remoulds and ‘budget’ tyres. We were experiencing significant downtime however, as well as the added costs of driver waiting, mechanic call outs and delayed deliveries, so we implemented a thorough review of our tyre policy. At about that time, our latest batch of Scanias came in with Continental construction tyres fitted, which allowed us to monitor those particularly closely.”

The Tillicoultry Quarries’ fleet comprises more than 40 vehicles, the majority being six and eight wheel tippers and mixers, but also including half a dozen tractor units and ten trailers. The fleet works in and out of the company’s eleven quarry and processing sites spread across the central belt of Scotland. The work, as Wilson noted, is demanding, involving running into and out of the company’s mix of hard rock, sand and gravel quarries, as well as its asphalt, concrete and recycling sites, and then on and off road for customer deliveries right across the country. Continental construction tyres (steer HSC1, drive HDC1 and trailer HTC1) have specific on-off road compounds, a four-ply belt with reinforced second and third belts, reinforced side walls and greater tread depth, precisely to cope with this type of work. Tillicoultry Quarries estimates its fleet spends a considerable amount of its time operating in harsh off-road conditions

Wilson commented: “From the moment our latest new batch of Scanias arrived with Continental HSC1 tyres on the steer and HDC1 tyres on the drive axle in spring 2015, a mix of 315/80 22.5 and 295/80 22.5 that we use today, there was an immediate and noticeable improvement. The amount of punctures reduced and tyre wear was instantly improved. We are no longer regularly sending out mechanics to change tyres, and have reduced down time for drivers and late deliveries. The cost of saved downtime alone is significant over the past year. It’s a considerable cost improvement in its own right, but it goes far deeper than just that. As a company we pride ourselves on meeting delivery promises – we aim to be the best. That means we are very dependent on transport, so the added reliability theses Continental tyres have given us is worth far more than any straight-forward cost savings.”

The company also uses the Continental Casing Management programme, whereby their worn tyres are returned to Continental to be inspected and graded, and then either re-used in the production of Continental’s retreaded range, ContiRe, or scrapped and disposed of responsibly. Tillicoultry Quarries also invested in training courses from local specialist companies to take drivers through enhanced awareness on tyre and wheel checks, as well as changing where necessary.

Wilson also gets monthly updates from his local Continental Tyres manager, Barry Crockett, which he describes as, “Very useful in terms of keeping abreast of technology advances with tyres and their running, as well as monitoring current performance and planning for the future.”