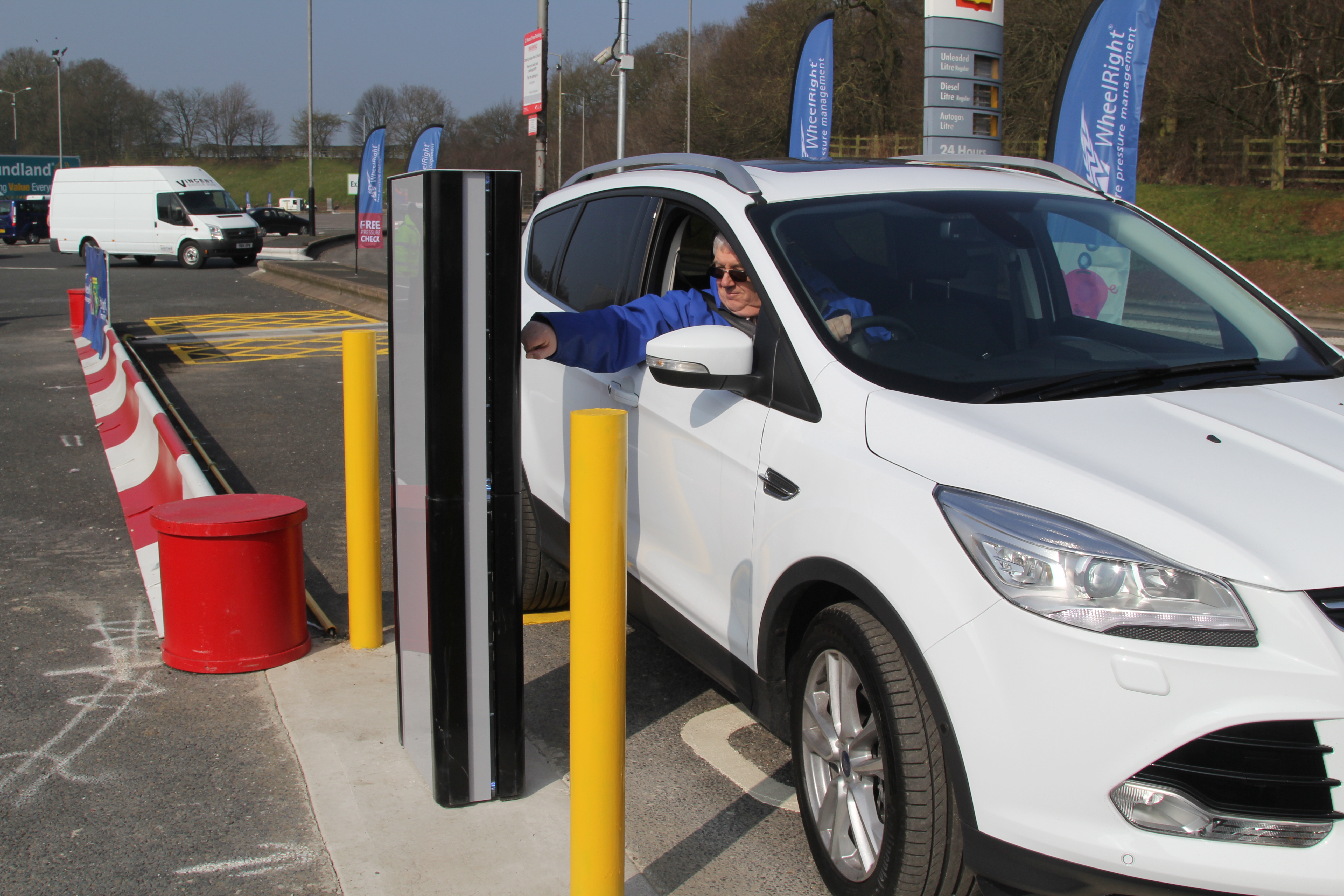 Following on from the news that WheelRight is piloting a few pressure check system at Keele services on the M6, Tyres & Accessories considers what the potential is for a networked tyre monitoring system. As unusual as an external tyre pressure monitoring system is, the obvious question with WheelRight is not “how does it work?”, but rather “why are they doing this?” Of course, the Keele pressure bay trial offers a good bit of safety awareness, but there is a business case too. From T&A’s point of view the most interesting answer to our own question is two-fold -retail networks and big data.

Based on a science park in Oxford, has devised the technology, its own sensors and even the smart the data network-connected pressure units we saw at Keele Welcome Break. But for the relatively young business to prosper, a large scale roll out is required. T&A understands that WheelRight invested a five-figure sum in the Keele pilot scheme – and no-one would do that without at least the possibility that a) it would be extended and b) expanded. It’s the latter of these two points that we will focus on first.

During the launch presentation, John Catling referred to another pilot scheme WheelRight is running with an unnamed oil-major. In this case the tyre pressure technology firm has supplied another free tyre pressure testing module, this time positioned at the gate of the oil office’s location. In addition, the technology here was merged with an SMS messaging system, which reminds employees – who are often company car drivers – when their tyre pressures are not at appropriate levels. This of course has safety, fleet cost and fuel consumption benefits. The interconnectivity aspect is something we will return to later, but for now what jumped out at me was the company WheelRight are working with.

Oil companies have an inherent connection with petrol and diesel. And of course petrol and diesel is sold in thousands and forecourts up and down the land. These locations also have large-scale vehicle throughput and access to the necessary inflation equipment to make pressure adjustments. Reading between the lines, it appears such a roll-out is on WheelRight’s radar both in terms of applying this particular example (petrol forecourts) and broadening it more widely to say garages and tyre depots. Before you say that garages and tyre depots already have pressure gauges and compressors, the clever thing about this technology is that it makes the depot a 24-hour location, both familiarising customers with their tyres and with their local dealer whether the branch proper is open or not. This way, the customers are able to spot issues – such as slow punctures – earlier and will be proactively making their own decision to come back to a location they now trust during its business hours. Of course, this is just one scenario, but it is an interesting one.

A second scenario is almost the inverse of the first. Rather than bringing the pressure test bay from a petrol station forecourt to a tyre depot, why not bring the tyre deport to the forecourt? Here the tyre dealer could offer a “tyre-shop light” approach, giving the option of advice and doing repairs and replacements where necessary rather than the motorist simply re-joining the motorway with dodgy tyres.

Such practical ideas – and they are just that at this stage, ideas – are one thing, but perhaps the biggest potential from T&A’s point of view is with the data attached to a system like WheelRight. First of all, should a national or even regional network of such bays exist, then it would by necessity generate a national database of real-life tyre usage and condition. And this in turn is extremely useful to government and commercial stakeholders alike.

Owing to the fact that the bays use Automatic Number Plate Recognition systems, it also means the database – over time – would catalogue a tyre/vehicle history. Again, this has significant potential value for government and commercial reasons, but also for also for private motorists too. This database could offer third-party verification of how the car has been cared for. And this could be used in a private car sale situation, for example, where the mythical one former lady owner could use their WheelRight history as evidence of their attentive motoring.

Because each bay is joined to the internet via a mobile data connection inside its casing, there are even more potential customer relation management (CRM) benefits in the commercial world. Taken to the next stage, hypothetically, a dealer could actually have the system remind customers that there tyres need changing or even which branch to go to by SMS text message or on-screen.

This is perhaps most obviously useful in the commercial vehicle sector where such “big data” dovetails well with truck fleets that need to be on the road as long as possible with as short as possible breaks in between. With a national connected network, trucks could be checking their tyres each time they enter a depot or stop for fuel, simply by driving through a bay. This helps to address the as-yet unanswered questions facing competitor truck TPMS manufactures – how do you keep track of tyre pressures across vehicles as large, as complex and as busy as trucks?

Without knowing more about exactly how it works it is tough to say whether the accuracy of the system is superior to on-board direct and indirect TPMS. However, what is clear is that WheelWright is novel approach to the question of tyre pressure and temperature monitoring – there is even talk of expanding the technology to include tread depth – with plenty of potential ways of marketing the data it could potentially collect as well as its fundamental technology.