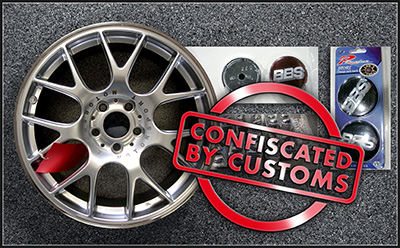 Pirates aren’t lovable rogues with eye patches and parrots perched on the shoulder. Piracy, specifically brand piracy, has become a major issue for manufacturers of well-known products. One such firm, German alloy wheel manufacturer BBS, says counterfeiters who sell online and offer everything from fake centre caps to complete wheels cause the firm significant damage, and now it is taking “appropriate measures” against these pirates.

The company reports that it has stepped up its investigations into suppliers of counterfeited products carrying the BBS trademark. BBS management is working closely with customs authorities in Germany and abroad. The fruit of this collaboration was recently seen in France, where together with French customs officials and with the involvement of the district attorney and the police, BBS recently managed to put a stop to an internationally active counterfeit ring.

It appears the alleged perpetrators wanted to import fake ‘CH-R’ design BBS wheels into Europe on a large scale, as well as brand accessories such as BBS symbol plates. The investigation into this matter is still ongoing, and therefore BBS is unable to disclose further details of the case at this time. However the company shares that the fake CH-R wheels are not recognisable as counterfeits at first glance and considered ‘professional fakes’. These wheels will be examined and destroyed after being released. Similar investigations are also currently underway in Italy and the United Kingdom.

“Under certain circumstances it could prove to be expensive for those who offer fake BBS articles on the internet, for example on the online auction platform eBay or over Amazon. Our legal department takes vigorous action when it comes to ridding the BBS brand of piracy. The spectrum ranges from written warnings to damage claims,” said BBS sales director Erwin Eigel.