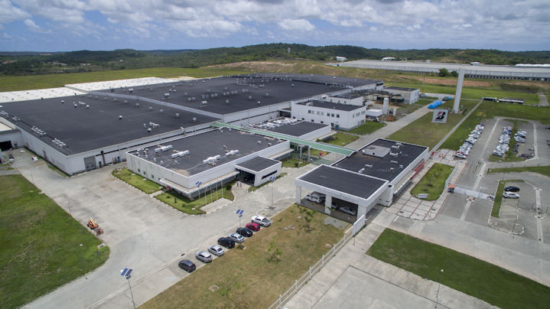 In order to meet increasing local demand for high-tech and premium tyres and in response to national and regional market share gains, Bridgestone is investing in its manufacturing facility in Camaçari, Brazil. The more than R$700 million (£101.7 million) investment will go towards modernising the plant and increasing production capacity by more than 20 per cent. The project will begin by the fourth quarter of 2021.

“This investment is part of Bridgestone’s mid-term business plan for sustainable growth in Brazil, focused on the premium tyres market and production of tyres for electric/hybrid vehicles, and reinforces our commitment and the strategic importance of Brazil for our company,” says Fabio Fossen, president of Bridgestone Latin America South. “I would also like to thank and recognise our valued customers and our incredible and dedicated employees, without whom this investment in Bahia would not have been possible.”

The plant expansion and modernisation project include an increase in annual production from 3.5 million to 4.3 million tyres, with new manufacturing technologies and the increasing application of Industry 4.0 concepts. Specifically, the Camaçari plant will gear up to produce high-performance tyres for “eco-friendly electric/hybrid vehicles.” Bridgestone Corporation says this new investment is part of its recently mid to long-term business plan to become a sustainable solutions company by 2050, providing social and customer value.

Opened in 2006, Bridgestone’s plant in Camaçari, Bahia, employs more than 900 and benefits more than 400 further workers indirectly. It produces tyres for passenger cars, vans, and pick-up trucks, intended for the original equipment, replacement and export markets. Bridgestone expanded the facility in 2016 and it has received more than R$1 billion (approximately £145.3 million) in investments since its inauguration.

CSR initiatives in the region

In addition to producing tyres there, Bridgestone is also known in Camaçari for its social and environmental initiatives. In 2018, for example, the company installed a biodigester unit to treat waste and contribute to zero landfilling, processing, on average, 15 tons of organic waste per month, achieving, in 2019, 99.6 per cent recycling of all organic and inorganic waste produced at the plant.

Other projects include the creation of an Environmental Education Center to promote environmental awareness among students from the community’s public schools and the employees’ children and families. Additionally, in partnership with SENAI (National Service for Industrial Learning), Bridgestone has launched a community training programme to prepare professionals who want to work in the tyre industry. The first class started in May 2021, with 20 students.

Bridgestone do Brasil’s manufacturing footprint includes four facilities. In addition to the Camaçari site, the company operates a tyre plant in the city of Santo André, in the state of São Paulo, as well as Bandag retread production plants Campinas, also in São Paulo, and in Mafra, in the state of Santa Catarina.