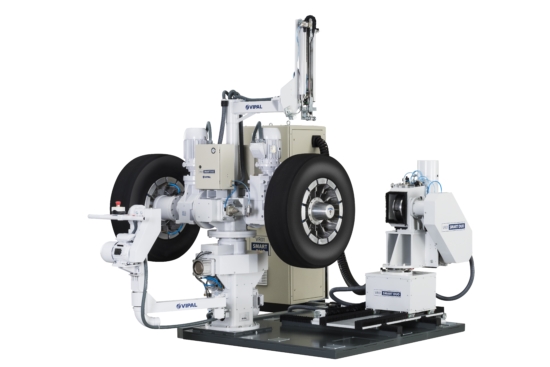 The kind of equipment Vipal supplied to the New Zealand-based retreaders (Photo: Vipal)

Christchurch-based Tyre Retreaders, was reportedly the first foreign company to acquire a piece of Vipal equipment in 2018 when the firm bought a VR01 Smart DUO buffer. Now they have just acquired the VOC-760 extruder as well. The VOC-760 machine assists with the application of rubber in the tyre and speeds up the preparation of the tyre for retreading, facilitating the overall process and eliminating eventual tyre surface imperfections. According to Tyre Retreaders´ Production Manager, Russell Hamilton, the speed with which the machine operates was impressive:

“One of the benefits that I have noticed is the heating activity time, it is much faster, important to start executing the retreading process, generating more time and savings in the cost per tyre manufactured”.

Like Tyre Retreaders, Power Retreads, from the city of Hastings, also invested in Vipal machinery. The retreader acquired two pieces of equipment for the company’s production line, the VR01 Smart DUO buffer, which allows the rubber to be removed from the tyre in the buffing process in an agile and precise manner, and the VOC 760 extruder.

“Our workflow has increased. We needed machines capable of keeping up with the new process, which is why we are happy to acquire devices of this size, which will facilitate the demands that we will receive throughout the year,” said the owner of Power Retreads, Dave Leicester, referring to the ability of the machines to optimize retreading time.

Vipal´s team was led by André Desconsi, Technical Assistant; Denisson Parizotto, Machine Assembly Mechanic; Gilso Zanotto, Automation Analyst at Vipal Machinery; and Tiago Campanharo, Vipal Commercial Technician in Australia. Vipal staff also took advantage of the time to carry out the necessary training to operate the equipment and to clear any doubts from both customers.

Vipal´s branch commercial Manager, Adalberto Fernandez, says that the line of machines is an intelligent and effective answer for retreaders that are looking for productivity and quality in their retreading process.

“We are proud to communicate that in New Zealand today our partners are producing their retreads with Vipal equipment. This was undoubtedly an important step, not only for Power Retreads and Tyre Retreaders, but also for retread tyre users in the country. This proves once again that the company demonstrates to be able to meet and overcome the most challenging demands”, Fernandez highlighted.

“The main goal of Vipal machinery is to bring the latest technology to our partners, wherever they are, offering them resource optimization”, the Director of International Business at Vipal Rubber, Leandro Rigon, highlights: “Vipal Machinery makes use of all the technical and technological capacity in its engineering that comes along with Vipal Rubber throughout its 46 years. We are therefore investing to expand our equipment and business portfolio in the global market”.