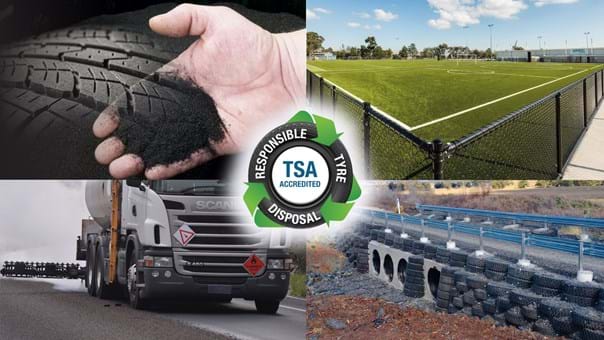 According to a report published by Tyre Stewardship Australia (TSA), 69 per cent of the 466,000 tonnes of end of life tyres generated within the country in 2018-19 were recovered for reuse or processing into tyre derived products or in thermal processing. This amount is the equivalent of 40.3 million car tyres.

The 40.3 million tyres equivalent can be accounted for as follows:

31 per cent of tyres were not reused or process. They were:

Landfill or buried on-site: An estimated 130,000 tonnes, the equivalent of 16.2 million used car tyres – or 28 per cent of all old tyres generated. The TSA notes that this figure is “shrinking every year.”

Dumped or stockpiled: Around 13,000 tonnes, the equivalent of 1.6 million used car tyres or three per cent of those generated.

“These recovery rates paint a very positive picture of how Australia’s tyre recovery industry is performing, and accredited participants under the tyre stewardship scheme have played a huge role in obtaining these results,” says Lina Goodman, TSA chief executive officer. “We are meeting National Waste Policy Action Plan targets for passenger and truck tyres, but we can obviously do a lot better when it comes to off-road tyres.”

Previous reports were unable to account for the destination of all end of life tyres. According to the TSA’s last annual report, this was an estimated 43 per cent of all tyres generated. “This knowledge gap is shrinking,” comments Goodman. “We have been able to come up with a far more accurate snapshot following extensive stakeholder engagement with more than 40 representatives across the supply chain.”

The TSA believes the imminent ban in Australia on exporting end of life tyres will lead to even better recovery rates and drive innovation and local investment. Of the estimated 323,00 tonnes recovered in 2018-19, 259,000 tonnes – the equivalent of 33.3 million old car tyres – were exported.