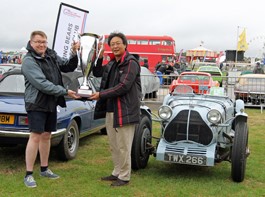 Yokohama Europe’s vice-president, Eisuke Imai, presents the Yokohama Trophy for the Club Car of the Show Award for the winning Routledge Special RA4

Yokohama returned to its racing roots during the last weekend in July as the official tyre partner to the Silverstone Classic. Already billed as the world’s largest classic motor racing festival, this year’s Silverstone Classic attracted record crowds of more than 109,000, a substantial increase on previous years, giving Yokohama a significant boost to its brand profile among motor racing and classic car fans alike.

“The Silverstone Classic just gets better and better every year and we’re incredibly proud to play a pivotal role in the festival,” comments David Seward, managing director, Yokohama HPT. “The event provides us with the perfect platform to showcase the breadth and history of Yokohama including some of our most famous championship winning motorsport successes.”

In celebration of over three decades of history in the UK, Yokohama unveiled a display of notable road and race cars which drew much attention from admiring visitors. Race cars in the display included Martin Brundle’s 1983 Ralt RT3 F3 race car, Robb Gravett’s 1990 BTCC championship winning Ford Sierra Cosworth RS500 and Bill Gwynne’s 1980 Vauxhall Chevette HSR rally car, which all ran on Yokohama tyres in period. Meanwhile the company’s on the road pedigree was demonstrated with cars including an original 1971 Nissan Skyline GT-R, a 1970 Datsun 240Z and a Lotus 340R which were all fitted with Yokohama street-legal tyres.

Meanwhile on track, Andrew and Max Banks stormed to victory in the Yokohama Trophy for FIA Masters Historic Sports Cars in their McLaren M6B. The winning trophy was presented by Yokohama Europe’s Vice-President, Mr Imai, who had flown into the UK especially for the weekend’s festival.

In the Supercar Legends Display presented by Yokohama, motoring YouTuber, Adam C, selected a stunning De Tomaso Pantera GT5 as the prize-winning car, presenting the winner’s trophy to its owner Geoff Peters.
Another award, the Yokohama Trophy for the Club Car of the Show, was presented to Will Wiggins for his unique Routledge Special RA4 – an Alvis-based creation raced by its creator Norman Routledge at Silverstone 65 years ago, which was judged to be the most exceptional car among the display of hundreds of car clubs in attendance.

Away from the high-octane action, Yokohama presented its range of road and race tyres including three new hobby tyre products, the ADVAN HF Type D, the A008P and in its first UK public appearance, the GT Special Classic.

“We’d like to thank everyone who was either in the running for one of our awards or simply came over to view our products,” adds Seward. “It was fantastic to chat with so many knowledgeable and enthusiastic motoring fans throughout the three days.”
Fans who were unable to attend the event at Silverstone will be able to see highlights of the weekend’s action on ITV4 on Sunday 18 August.