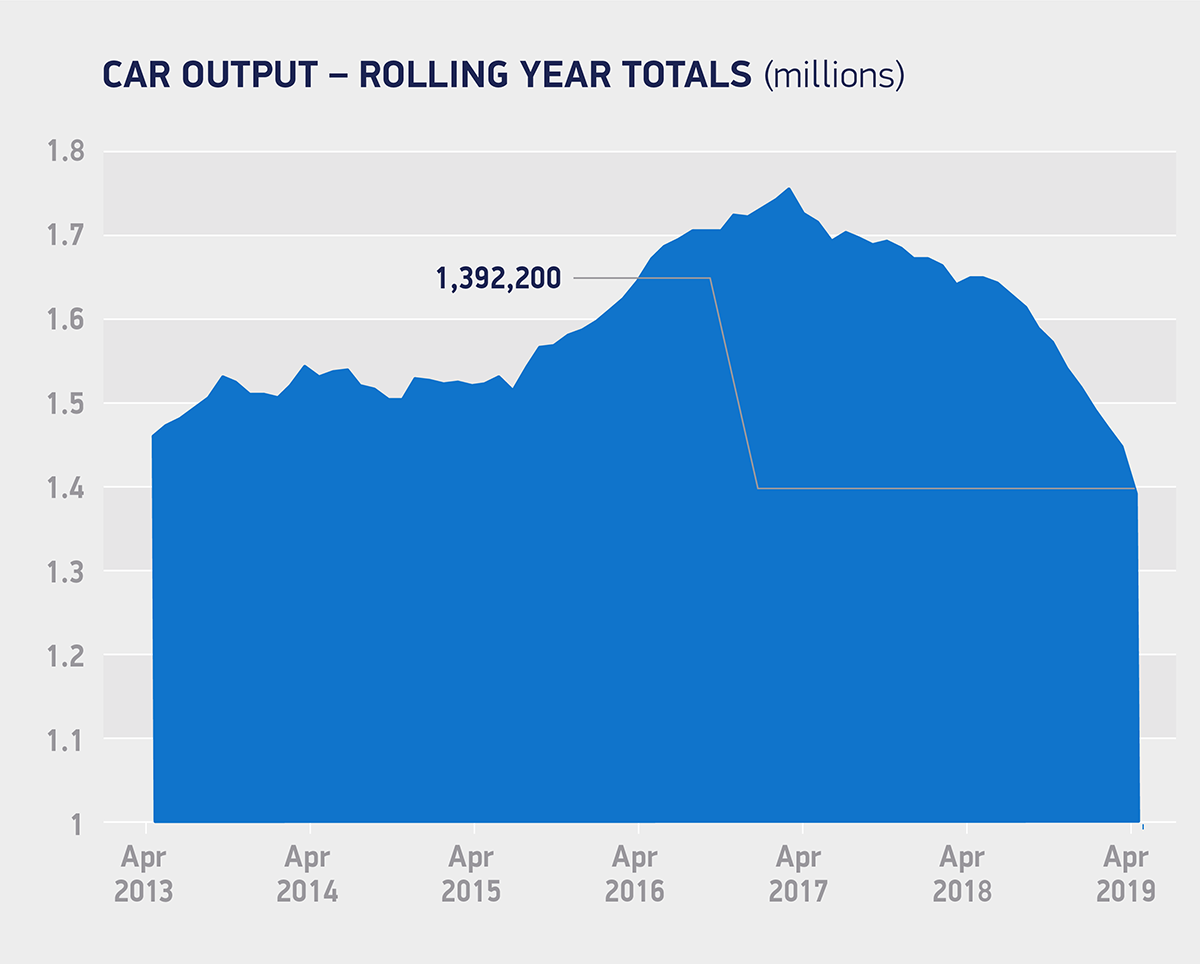 UK car manufacturing output plummeted in April, with figures published by the Society of Motor Manufacturers and Traders (SMMT) showing it was down -44.5 per cent year-on-year. 70,971 cars rolled off production lines in the month, as factory shutdowns, rescheduled to mitigate against the expected uncertainty of a 29 March Brexit, took effect in many plants across the UK.

Manufacturing for domestic and overseas markets fell -43.7 and -44.7 per cent respectively as most volume manufacturers brought forward, and extended, production stoppages normally scheduled for the summer holiday period.

The shift in shutdown, which cannot now be repeated for a 31 October deadline, was part of a raft of costly and ongoing contingency measures, including stockpiling, rationalisation, training for new customs procedures and rerouting of logistics – all designed to try to protect business when the UK leaves the customs union and single market.

April’s dismal performance, the 11th straight month of decline, exacerbated the underlying downward trend, due largely to slowing demand in key international markets, including the EU, China and the US, as well as at home, the SMMT stated. In the year to date, 127,240 fewer cars have been built compared with the same period in 2018 – a decline of more than a fifth (-22.4 per cent) – with similarly large percentage falls in production for the UK and export.

The SMMT expects the decline in volumes to ease by the end of the year, as new models come on stream and production lines remain active over the usual summer shutdown months. However, this prediction is based on both the UK leaving the EU with a favourable deal and substantial transition period, and notwithstanding any escalation of global trade tensions.

The latest independent outlook, commissioned from AutoAnalysis suggests output will still be down some -10.5 per cent on 2018 levels. It forecasts 1.36 million units for the full year 2019, down from 1.52 million units in 2018. This analysis is updated up to four times a year to respond to market and production cycle fluctuations. The analysis says a so-called ‘no deal’ Brexit could exacerbate this decline, with the threat of border delays, production stoppages and additional costs compromising competitiveness.

Mike Hawes, SMMT chief executive, said: “Today’s figures are evidence of the vast cost and upheaval Brexit uncertainty has already wrought on UK automotive manufacturing businesses and workers. Prolonged instability has done untold damage, with the fear of ‘no deal’ holding back progress, causing investment to stall, jobs to be lost and undermining our global reputation.

“This is why ‘no deal’ must be taken off the table immediately and permanently, so industry can get back to the business of delivering for the economy and keeping the UK at the forefront of the global technology race.”

KPMG calls for ‘limbo’ to end

Justin Benson, head of Automotive at KPMG UK comments on the SMMT car manufacturing figures for April 2019. He said: “April’s car production figures, which highlight a steep fall, are alarming for the automotive industry. The Brexit limbo needs to stop, as the sector requires certainty and clarity about the kind of Brexit deal that will be implemented. Whilst a significant fall in production was expected and planned for – in anticipation of the UK’s potential departure from the EU on 29 March – these sorts of figures cannot be repeated in October without serious implications for the sector’s output.

“The key concern is the effect on Britain’s competitiveness and reputation, considering around 80 per cent of cars produced in the UK are exported. We are already seeing German and other EU countries moving their orders for manufactured goods from the UK to companies in other EU countries in readiness for Brexit, so damage is already being done. I can’t stress enough that the automotive industry needs stability, and it needs it now.”