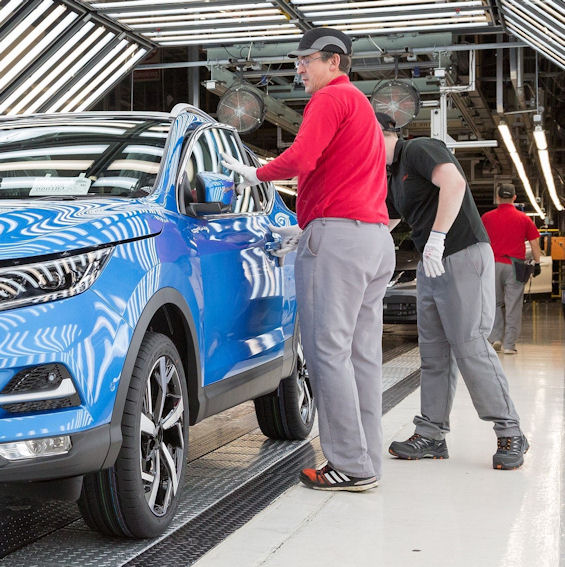 Another blow on the automotive industry’s chin as we inch closer towards a no-deal Brexit. The Society of Motor Manufacturers and Traders (SMMT) has released its latest UK manufacturing figures, and they make a depressing read. British car manufacturing output fell by more than a fifth in the first half of 2019, while commercial vehicle production was down more than 16 per cent and engine production almost 11 per cent. KPMG considers these numbers “worrying.”

The SMMT reports that 666,521 cars rolled off production lines in the first six months, a year-on-year loss of 168,052 units, or -20.1 per cent. Production largely shrank due to reduced demand in key markets, including the UK. This was exacerbated by factory shutdowns that were pulled forward in anticipation of the March Brexit deadline.

The -15.2 per cent decline experienced in June marked the 13th consecutive month of negative growth. The only positive news within this poor result was the 17.8 per cent increase in output for the UK market, with 18,438 cars made. This followed an anomalous -47.2 per cent decline in the same month last year when preparation for the new WLTP emissions test impacted volumes. The underlying trend, however, remains downward, with year-to-date production for the domestic market down -16.4 per cent.

Commenting on the car manufacturing figures, Justin Benson, UK head of Automotive at KPMG, said: “Demand in all major overseas markets is down and investment is at an all-time low. The UK’s automotive industry has historically been robust, particularly during tough times, but the numbers we’re now seeing are worrying.

“Investment cycles for carmakers are five to ten years and with Brexit uncertainty at the fore, the global automotive industry is not currently investing in the UK automotive sector’s long-term future,” Benson continued. “Whilst export markets are vital, confidence in the UK as a place to manufacture is equally important and needs restoring. The uncertainty of Brexit is adding to the global malaise in vehicle demand by creating long- and short-term concerns for the industry.”

In the first six months, output fell -15.8 per cent on the same period in 2018. The overall fall was driven by three months of significant decline following a strong start to the year. Home production increased by 11.1 per cent, while exports fell -29.2 per cent, with 19,735 units shipped abroad in the first half of the year. However, exports still account for more than half of all UK CV manufacturing, with the majority destined for the EU.

“Although model changes and fluctuating fleet buying cycles are behind the recent decline, these half-year results once again demonstrate the importance of exports to UK commercial vehicle production,” commented Mike Hawes, SMMT chief executive. “Exports to the EU account for a substantial part of CV output, therefore a Brexit deal that maintains frictionless trade and secures our competitiveness will be key to the future viability of this valuable UK sector.”

Production of vehicle engines in the UK fell -10.8 per cent in the first half of 2019 to 1.3 million units, with demand from domestic and export markets down -16.9 per cent and -7.0 per cent respectively. The SMMT notes that this decline in UK engine production mirrors the drop in output at car and commercial vehicle plants.

“Ten successive months in engine output decline show the impact that Brexit uncertainty is having on the supply chain. Industry needs stability in order to invest and grow, which right now means securing a future relationship with the EU that maintains free and frictionless trade with our key export markets,” said Hawes.

These latest figures come as new SMMT findings, released today, reveal the substantial cost to industry of ‘no-deal’ Brexit preparations. Based upon research conducted with its members in the first half of 2019, the SMMT calculates that at least £330 million has already been spent by the sector on contingency plans. Most major UK manufacturers have tied up working capital stockpiling materials and components, securing warehousing capacity and investing in new logistics solutions, additional insurance and training in new customs procedures. Significantly, many manufacturers have moved annual plant shutdowns from the summer to April, a measure which cannot be repeated for the proposed October departure date.

Meanwhile, figures show that inward investment into the sector effectively stopped in the first half of the year. The SMMT calculates that in the period from January to June, newly pledged investment was down more than -70 per cent to £90 million, contrasting with the average annual investment figure of £2.7 billion over the previous seven years. While the SMMT welcomed Jaguar Land Rover’s announcement earlier this month as “exceptional good news”, this is something of an outlier as the vast majority of manufacturers have suspended plant and product spending in the UK amid ongoing uncertainty.

“Today’s figures are the result of global instability compounded by ongoing fear of ‘no deal’,” states Hawes. “This fear is causing investment to stall, as hundreds of millions of pounds are diverted to Brexit cliff-edge mitigation – money that would be better spent tackling technological and environmental challenges.

“The industry’s foundations are fundamentally strong, however, and we’re ready to work with the new government to build on these through the industrial strategy,” the SMMT chief executive continues. “We need an internationally competitive business environment to encourage more investment, more innovation and more growth. That starts with an ambitious Brexit deal that maintains frictionless trade and we look to the new administration to get a deal done quickly so manufacturers can get back to the business of building cars and helping deliver a brighter future for Britain.”