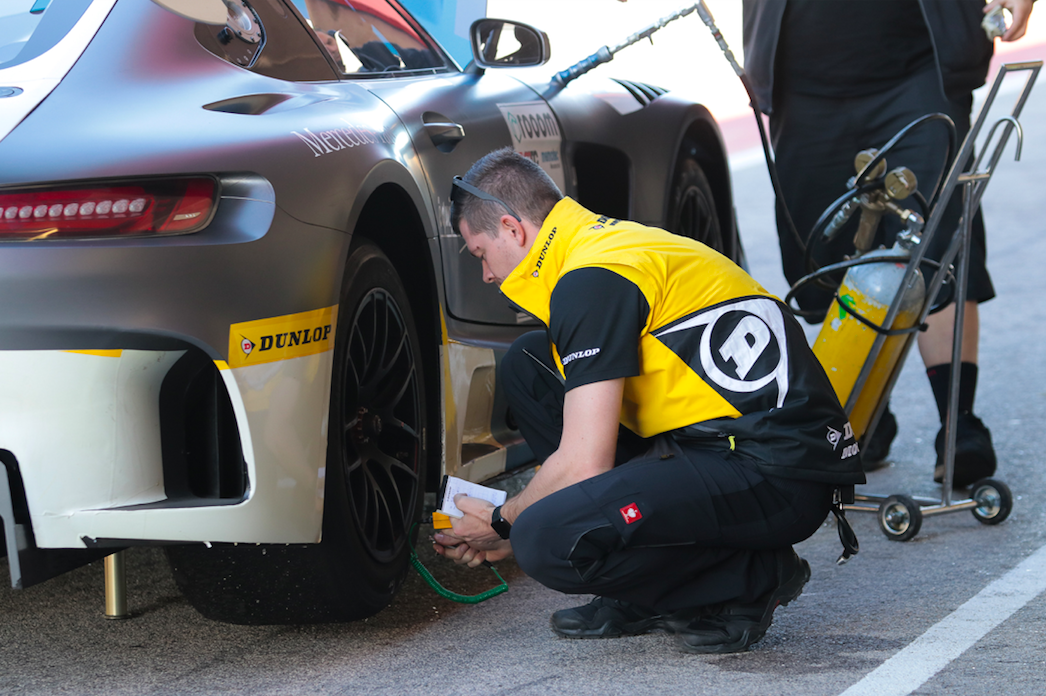 Dunlop has concluded a tyre test programme that will result in new tyres being introduced into the German VLN Endurance Championship. The tyre manufacturer hopes to make another step forward in performance to build on a successful season in the Nürburgring Nordschleife based series. Dunlop-equipped cars took several overall and class wins in 2018, and the tyre company used the session at Portugal’s Autodromo Internacional Algarve to test new ideas and concepts for the 2019 season.

The coastal circuit was chosen for several reasons. Firstly, in winter it has a similar climate to the Nürburgring in the spring. Secondly, the circuit features a range of contours, inclines, crests and cambers that allow tyre engineers to replicate the forces that will be experienced at the notoriously challenging German circuit.

Over three days, 11 different cars took part in the test. For GT3 cars, which compete in the top SP9 category of VLN, Dunlop tested new specifications on the latest Audi R8 LMS, BMW M6 and Mercedes-AMG GT. In 2018, Dunlop tyres were used to win two races, both with Porsche 911 GT3 R, and one of the goals was to replicate this high level of performance across a range of different car models.

The VLN regulations allow a limited number of front and rear tyre specifications per car type each season, giving tyre manufacturers ample scope to innovate and introduce new technologies. It is this technical freedom that drives Dunlop to develop, according to Alexander Kühn, product manager, motorsport Europe; “We have made a step forward during this test and validated new specifications that we expect to use in the early part of the season.

“Our objective has been to widen the operating window of the tyre range. The Nürburgring has notoriously fickle weather and having a range that can cater for single figure temperatures to a searingly hot track is important. In that respect, I’m confident that we have made a step forward.”

The GT4 category features cars that are closer to production specification. A varied range of models are eligible, including cars as diverse as the BMW M4, Porsche Cayman and Aston Martin Vantage. After two years of running the class as a control tyre formula, the VLN organiser has opened the class to all tyre manufacturers.

Kühn is excited about the tyre manufacturer battle in this category; “Dunlop has a lot of experience in GT4 and Touring Car racing and we are adapting proven technology from other categories to our VLN tyre range. Last year, in the production SP8 class, the Dunlop equipped Racing One Ferrari 458 dominated, winning every race. Our experience of this programme has been applied to our GT4 range.”

Dunlop has been chosen to equip the VLN’s closely fought ‘TCR’ Touring Car classes with its latest generation of race tyres and the Algarve test was used to assess specifications for this category. In TCR, a standard 265/660R18 specification will be used on a wide range of cars, including the Audi RS3 LMS, Hyundai i30 N, Opel Astra, Seat Cupra and Volkswagen Golf GTI. Dunlop’s goal in this class is to ensure the tyre specification offers equal performance for every entrant.

Also present at the test was the Revolution Sports Prototype, which completed over 1,000 kilometres of testing, ahead of its debut in the one-marque UK Revolution Trophy this year. Dunlop has been appointed as sole tyre supplier and finalised the tyre specification for the 440bhp/tonne lightweight racer at the test.

Dunlop will return to the Autodromo Algarve in late March to test latest tyre specifications for the European Le Mans Series.