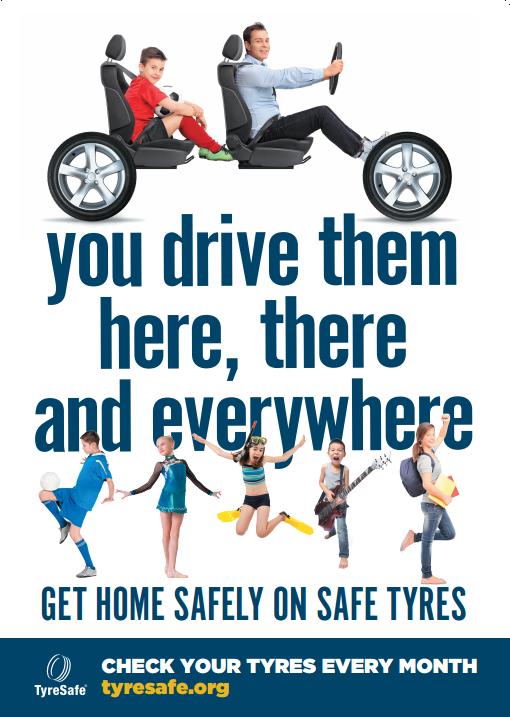 UK charity TyreSafe has launched a new awareness campaign aimed at “parent chauffeurs.” Noting the statistic that parents are likely to have spent more than 3,000 hours (around 125 days non-stop motoring) driving their children around by the time they reach 20, the Home Safely on Safe Tyres campaign highlights the importance of tyres in minimising the risks to drivers and their young passengers while on the roads. It also emphasises to all drivers entrusted with child care that it is their responsibility to check the condition of their car’s tyres.

Parents can clock up over 30 miles a week, or 1,500 miles a year, driving their children to different clubs and hobbies; almost the same as driving from Land’s End to John O’Groats and back. It is the driver’s responsibility to check their tyres and keep them in good condition, but a TyreSafe survey of more than 340,000 tyres at the point of replacement conducted in partnership with Highways England suggests that more than one in four parents may be driving with illegal or poorly maintained tyres.

The campaign has been launched with the message, “You might be up for driving them there – but are your tyres?”, posters, leaflets and an animation advise how drivers can carry out general tyre maintenance themselves. Alternatively, drivers can ask a tyre professional to ensure their tyres’ air pressure, condition and tread depth are safe and legal.

These materials will be distributed across relevant supporter facilities. The charity also welcomes further partnership enquiries at: theteam@tyresafe.org.

Stuart Jackson, chairman of TyreSafe, said: “Taking children to the activities they love, from Guiding or Scout organisations, to football and swimming, and everything in between, is an almost daily occurrence for most parents. It’s vital that parents all remember the car tyres are the only part of the car in contact with the road, which makes their maintenance essential. Whether you are a parent, grandparent or guardian, checking your tyres once a month is the minimum that can be done to make sure we get them home safely on safe tyres.”

This year’s carer campaign follows the success of the 2016 awareness drive aimed at mums-to-be and the 2017 campaign aimed at drivers with toddlers.

Bickers’ top tips to prepare your motorcycle for winter hibernation