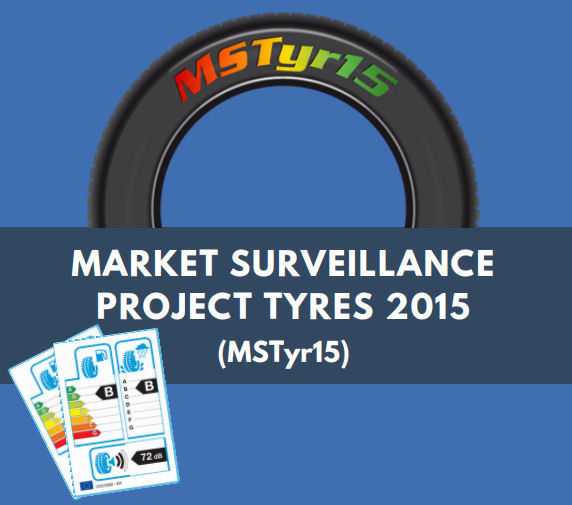 The coordinator of the Market Surveillance Action on Tyres 2015 (MSTyr15) project claims success in its goal of ensuring that Regulation (EC) No. 1222/2009 on the labelling of tyres is effectively enforced. In a statement, PROSAFE (Product Safety Forum of Europe) has shared details of the 28-month project.

From the 12,241 tyres checked, 2,888 (23.5 per cent) were examined on online retail portals; 627 (21.7 per cent) of these were found to be non-compliant. Checks were also performed in tyre depots; 568 (6.1 per cent) out of 9,353 tyres inspected proved non-compliant. The main non-conformities involved the label being absent or incorrectly presented.

In addition to checking for label compliance, 131 passenger car tyres were sampled and sent for testing by an accredited laboratory against Regulation 1222/2009. Following repeated tests, five models (3.8 per cent) were found to be non-compliant for wet grip, while nine models (6.9 per cent) did not meet the requirements for rolling resistance. None of the 131 tested tyres failed both the wet grip and rolling resistance tests. 876 sets of technical documentation were also inspected; 38 per cent (334) of these were either incomplete or failed to be delivered on time.

No tyres were ordered to be withdrawn from sale as a result of the MSTyr15 inspections, however a number of agreed enforcement actions were adopted, including a total of 1,122 letters sent to Economic Operators requiring them to take corrective actions. In many cases, one letter covered issues with multiple tyre models; one authority reports sending 39 letters concerning a total of 236 tyres. In an additional 240 cases, Economic Operators took voluntary measures to correct non-compliancy. PROSAFE notes that due to the nature of the market surveillance process and of this specific market, enforcement action may continue to be carried out for months to come and go beyond the timeframe of this joint action.

Data collection was aided by a bespoke database developed for the MSTyr15 project. This helped harmonise the enforcement measures to be taken by member states. Results will be directly fed into the Information and Communication System on Market Surveillance (ICSMS) system (an IT platform that facilitates communication between market surveillance bodies in the EU and in EFTA countries) and shared with all MSAs across Europe to enable immediate corrective action, thus saving significant inspection costs at the European level. PROSAFE says the database, together with the adopted best practice guidelines, ensures a cost-effective and consistent approach to real-time knowledge exchange between MSAs across Europe.

Furthermore, to develop skills relevant to the scope of the project, MSTyr15 has created label inspection training videos in 15 languages and organised two training workshops to prepare participants to use the newly-developed application software. MSTyr15 has also ensured that tyre suppliers are well informed about their responsibilities towards the tyre label and its visibility. PROSAFE expects that the publication of the project results will also increase consumer awareness and help them to choose more efficient and safer tyres.

Beyond its core scope, PROSAFE shares that the MSTyr15 project has led to the establishment of valuable relations with non-participating MSAs across the European Economic Area, while connections forged with a number of European associations, consumer organisations and environmental NGOs have set the ground for future synergies.