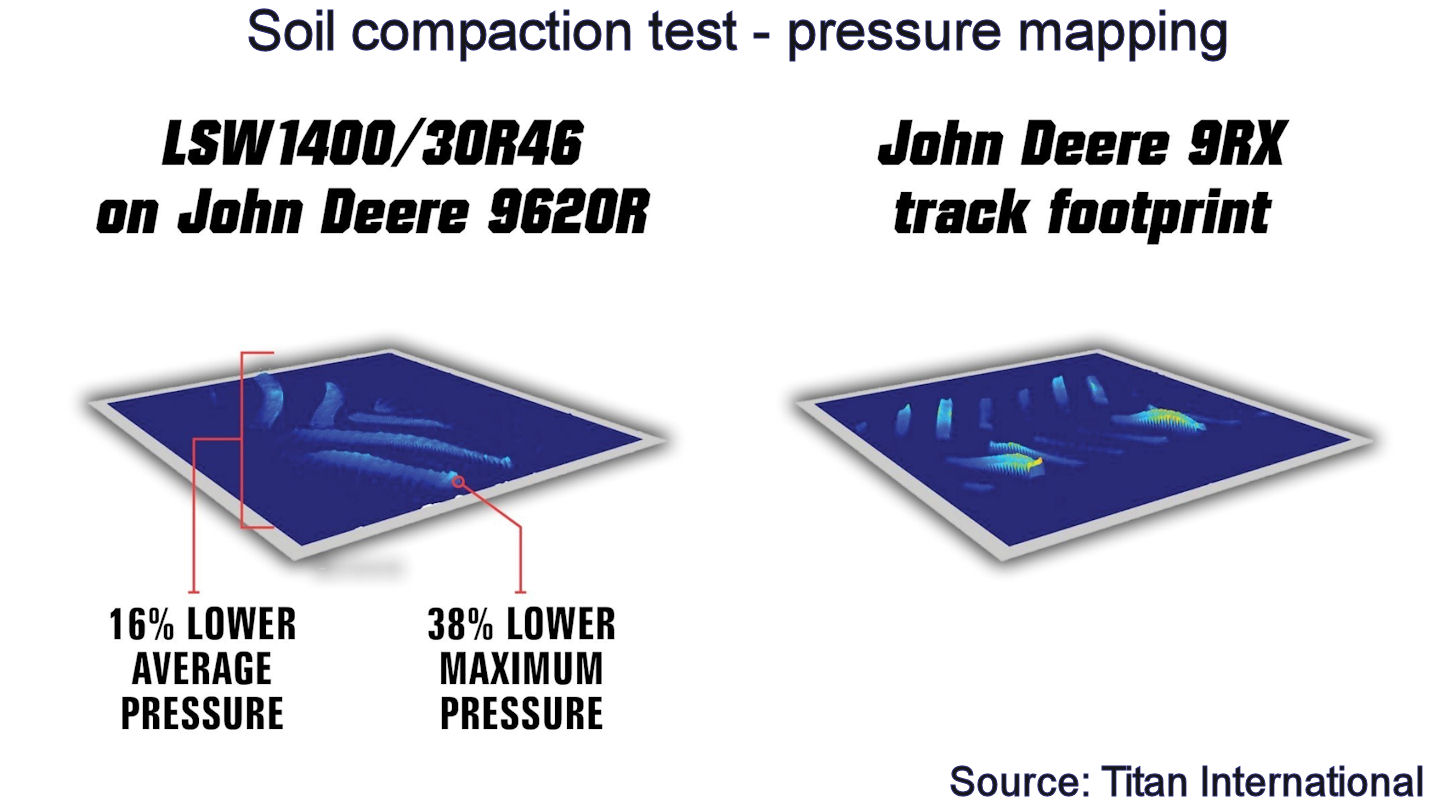 Will the agricultural market shift towards wheeled 4WD tractors over their tracked counterparts in the years to come? Titan International believes so. It bases this projection upon feedback from US agricultural equipment dealers and their customers, as well as from testing the tyre maker carried out in North America together with dealer group Van Wall Equipment. This showed that super single tyres offer comparable field performance and reduced soil compaction at a much lower cost than tracks.

Van Houweling comments that he’d been looking for a more cost-effective option to tracks for his customers. “I took interest in the LSW1400s but didn’t feel comfortable recommending them to my customers without proof that they could keep up with tracks. That’s why we were interested in the testing.” Noting that the tests showed the Goodyear tyres “perform equally as well as tracks, if not better” in normal field conditions, Van Houweling opines that a tyre-shod tractor also offers a “much more desirable transport experience.” Furthermore, the cost of fitting and working with tyres is much lower: “This is a valuable proposal for my customers, who are always watching their bottom lines.”

A second test compared the ground-bearing pressure of the LSW1400 tyres on a John Deere 9620R versus a John Deere 9RX track machine, using Tekscan pressure mapping technology to record more than 100,000 data points on the two machines. Titan found the ground-bearing pressure with the LSW1400s was an average of 16 per cent lower than tracks, with the tyre’s maximum recorded pressure being 38 per cent lower than the maximum pressure of tracks. Titan says the data shows the tyres’ viability as a competitor to tracks, but ultimately, growers are also looking for buy-in from the OEMs.

“The performance and potential cost savings demonstrated through this testing should provide both OEMs and growers all the proof they need to shift to super single tyres,” says Scott Sloan, ag product manager for Titan and Goodyear Farm Tires.

Explaining why it believes the balance between wheeled and tracked tractors will shift in change in future, Titan International highlights the experience of Chad Colby, one of the largest Case IH dealers in the US Midwest. Colby mainly sells track machines to his customers; however, he expects to see many growers switch from tracks to wheeled machines in future in response to the alternative now offered by Titan. The dealer believes this trend will be in-part driven by tyres’ comparatively slower rate of wear and the affect this has upon equipment resale value.

“With growers looking for ways to save money, the timing is ripe for the market to start shifting toward wheeled machines. And we’ve got the right tyre to do it with Goodyear LSW super singles,” says Colby. “I tour farms every year to do product demos. This year, the machine I take will be a Steiger equipped with LSW1400s. I’ll be targeting a lot of my long-time track customers and discussing why they should consider the switch to a wheeled machine – that’s how confident I am in the tyres’ ability to compete with tracks.”

Case IH has recognised the market potential of super single tyres and has recently added the Goodyear Optitrac LSW1250/35R46 as a price book option for the Steiger series in certain markets. Titan is convinced that as an alternative to tracks or conventional dual configurations on large 4WD tractors, the Optitrac’s section width offers the “ultimate combination of flotation, traction and ride quality.”

“Until recently, there hasn’t been a viable alternative to tracks on the market, says Scott Sloan. “With continued pressure on margins, growers are evaluating their equipment investments with a more critical eye. We’re entering a key replacement cycle for machinery, and farmers are ready to buy, but they are looking for a better value. That’s why Titan is putting such a heavy emphasis on developing flotation options, and why we’ve partnered with key equipment dealers to ensure their viability as a replacement to tracks.”