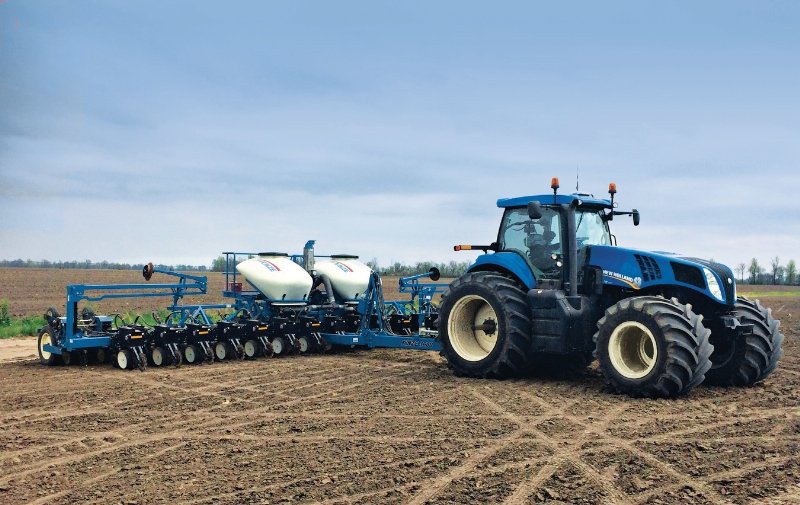 Titan International’s Low SideWall, or LSW tyres have been sold to the UK construction sector for the past year, however they are also gaining acceptance amongst agricultural users over in the USA and are prized by many for their reduced soil compaction characteristics, as well as the reduction in road lope and power hop they bring. The Titan LSW agricultural tyres are sold under the Goodyear brand name.

One farmer (and New Holland dealer) from the US state of Missouri wished to verify whether his Goodyear LSW Super Single tyres were indeed improving his bottom line, so last spring he put them to the test in a corn and soybean plot. The harvest data is rolling in, and recently Titan International chairman and chief executive Morry Taylor and Paul Reitz, the company’s president, met with the farmer, Mark Stallings, to review the findings. The tyre depth measurements taken during the corn planting are shown in the accompanying Table 1, with an average of 1.580 with Goodyear LSW Super Singles versus 2.550 with Michelin Duals.

Increased compaction, notes Titan, is a result of running standard OEM duals. Additionally, the pressure of the narrow duals causes rutting between the tyres. That pinch row effect from narrow duals showed a negative impact on yields, through stunted root growth development and poor seed germination. The accompanying graphic (Singles vs Duals) shows the centre line of corn rows in reference to the tyre track for both tractors. The 20 per cent increased footprint of the Goodyear LSW Super Singles reduced ground-bearing pressure. As can be seen in the photo of the corn stalk comparison from the growing season, the LSW-equipped tractor produced taller and healthier corn.

Titan has another test site in northwest Illinois that it expects to back up the findings from the southeast Missouri trial. Taylor commented: Titan’s entire LSW team is very excited about this news as it’s been a priority to get real data on how good these tyres are for farmers and confirming Titan’s statement that these tires make every piece of equipment perform better. I’m very happy for all of the Titan team and look forward to working with farmers and dealers to increase their yields. The OEMs will realise the benefits of the Goodyear Farm LSW technology and will be shocked that they could have had these LSW tyres on their equipment five years ago.” Stallings also commented that area farmers are coming to see the LSW Super Singles and asking him about the yield increase.

This winter, Taylor will attend various FFA (Future Farmers of America) meetings and talk about the Goodyear LSW Super Singles. “I’ll enjoy talking to them,” he commented. “We support numerous FFA organisations across the country. These kids are the future of ag in America and they need to be aware of the innovations available to their farms.”

Titan is also testing benefits of Titan LSW tyres on construction and mining equipment and will share results once available.

Layoffs at Yokohama tyre plant in the USA