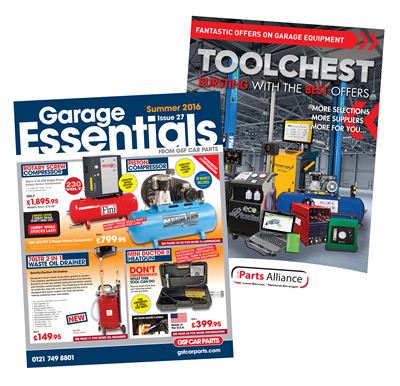 The Parts Alliance has announced that the Garage Essentials equipment brochure, originally developed by GSF Car Parts, will be made available through all members from the next issue (Autumn 2016) due out in October.

“We’ve found that around 85 per cent of the content is similar already between Toolchest and Garage Essentials as we’ve both been actively looking to work with the best suppliers,” said John Wright, Head of Garage Equipment and Customer Development. “It’s clear we can save a lot of time and energy by producing a single publication instead of two, offering suppliers a greater audience and circulation.

“We’re already hearing the concept of an extended distribution throughout The Parts Alliance makes Garage Essentials even more attractive for suppliers, as we work with them to create and deliver the best possible deals for independent garages.”

Garage Essentials will continue to be distributed throughout the UK by trade press insert but now the print run will be extended by 20,000 copies to ensure availability from around 90 more branches of CES, GMF, Allparts, Car Parts & Accessories, SC Motor Factors, SAS Autoparts and BMF.