You are here: Home1 / News2 / Legislation3 / TyreSafe: over 10 million vehicles on an illegal tyre

TyreSafe: over 10 million vehicles on an illegal tyre 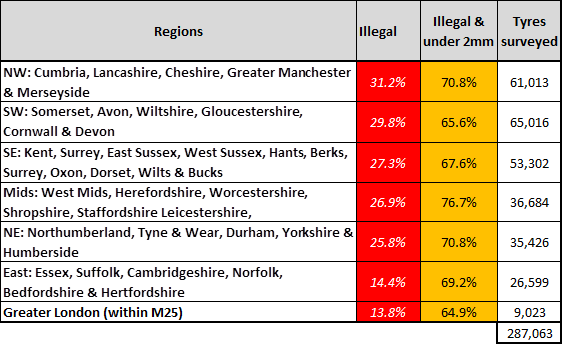 TyreSafe shared the results of its latest national tyre survey on 14 July, with the shocking headline figure suggesting that “over 10 million UK motorists could drive a vehicle with an illegal and dangerous tyre during 2016”. Speaking during the Tyre Safety Month Briefing, TyreSafe chairman Stuart Jackson shared how the survey, conducted by TyreSafe in partnership with Highways England, reveals that more than 27 per cent of tyres were already illegal when they were replaced. That equates to more than one-in-four of the 37 million cars and light commercial vehicles (LCVs) on the UK’s roads.

Stuart Jackson, Chairman, TyreSafe, said: “The Tread depth survey results are a concern. Figures from the Department for Transport show that dangerous tyres are the largest single contributory factor in accidents resulting in casualties of any vehicle defect – including brakes. If the number of casualties from tyre-related incidents is to be reduced on our roads, the UK’s motorists need to change their attitude to this primary safety feature and carry out regular checks to ensure their vehicle’s tyres are roadworthy.

“The concern comes not just from the number of illegal tyres at the point of replacement, but also the proportion which were below 2mm – those with just 0.4mm left (half the thickness of a bank card) before reaching the 1.6mm legal minimum. While a tyre is legal at this point, the amount of distance it can cover and remain within the law is difficult to predict and can only be verified by regular checks. TyreSafe’s own research has revealed one-in-five drivers have never checked their tyres and the majority of the remaining vehicle owners do not do so on a regular basis.

“The obvious conclusion is that while one-in-four tyres are illegal at the point of replacement, a further 43 per cent are changed before reaching 1.6mm more by good luck than good judgement.”

Stuart Lovatt, Safety Action Plan Coordinator, said: “Safety is our top priority and we are delighted to have worked in partnership with TyreSafe to undertake this innovative and comprehensive survey on the state of UK tyres. We will continue to support TyreSafe in raising awareness of the importance that tyres play in ensuring that journeys are safe and incident free.”

The results follow a survey of over 340,000 tyres as they were being replaced at 819 retail outlets across England, Northern Ireland, Scotland and Wales and compiled by TyreSafe. The average proportion of illegal tyres at the point of replacement across the UK was 27.3 per cent but variances between the four home nations were also highlighted with Wales (29.1 per cent) and particularly Northern Ireland (36.5 per cent) recording a higher proportion of illegal tyres. Scotland’s results were on par with the UK average at 27.4 per cent while England recorded the lowest proportion at 26.8 per cent.

However, a concerning trend has been identified in the number of tyres which were illegal and/or below 2mm at the point of replacement. On average this was 70.4 per cent across all the UK with remarkable consistency in each of the home nations. This figure has increased since last year’s tread depth survey by TyreSafe in partnership with Highways England which revealed 66 per cent of tyres fell into this category. If this trend continues, TyreSafe is warning that higher numbers of dangerous and illegal tyres will be driven on the UK’s roads in 2017.

The results also show that the North West is the worst region in the UK for removing tyres past the legal limit, with 31 per cent of the 61,013 tyres in the Northwest being removal below 1.6mm. The northwest also had the dubious honour of coming joint second in the table in the 2mm and below category. In this case 70.8 per cent of tyre sampled were 2mm or below at the point of tyre change.

Yokohama and Chelsea offer free youth soccer clinics in the US