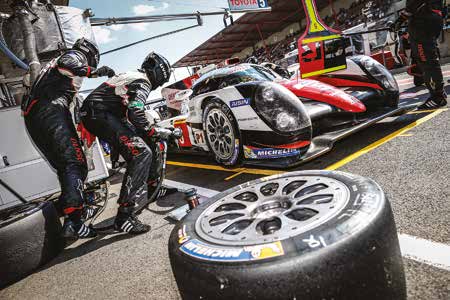 The developments of Michelin’s endurance racing tyres are on show at this year’s Le Mans 24 hours. The manufacturer said its winter programme, conducted between November 2015 and the FIA World Endurance Championship’s 2016 season-opener at Silverstone, comprised every class, while focusing on making its tyres more competitive against increasingly active competition. Nearly every car competing on Michelin tyres has evolved since last year, the tyre supplier explains.

In LMP1, the Toyota TS050 Hybrid is powered by a new 2.4-litre bi-turbo V6 bi-turbo instead of the former car’s V6. It also features new lithium-ion batteries instead of the supercapacitor used previously by the team to store the energy recovered by motor-generator units on the front and rear wheels. As a result of these changes, the car has switched to the top eight mega joules category, and consequently has a different weight distribution. This new configuration, combined with changes to the car’s aerodynamics, have had an effect on the load applied to each tyre, prompting Michelin Motorsport’s engineers to work on both the casing and compound of its tyres.

Michelin describes Audi’s changes as a minor technical and aesthetic revolution. The R18’s exterior has undergone significant changes, while its V6 TDI engine has evolved to deliver even more power and its hybrid system manages available energy differently. It has switched from the four to the six mega joules class which has led to upgraded power and performance. Combined with additional aerodynamic downforce and a new front suspension design, this has inevitably had an impact on the car’s tyres.

Meanwhile, improvements to the Porsche 919 Hybrid have optimised the German car’s power output (within the 1,000hp limit dictated by the 2016 regulations), while there is a new-generation lithium-ion battery and optimised electric motor-generators. The weight of the four-cylinder turbo engine has been brought down but the biggest impact on tyres is the result of improvements to the front suspension. All this development work was carried with support from Michelin and the 919 Hybrid’s tyres are adapted to the latest configuration. “In LMP1, we have a range of six tyres for our partners,” explains Jérôme Mondain, manager of Michelin’s endurance racing programmes. “Their specification has evolved to match the changes made to the cars. Our mission was to take the new constraints into consideration while at the same time making sure we achieved our objective of making ongoing improvements to performance. Developing such high-performance racing cars requires close collaboration between the teams and ourselves. The aerodynamic downforce generated by today’s cars, especially by the LMP1 prototypes, has increased significantly in recent years. Had we failed to match this evolution year after year, the tyres which were capable of completing four or even five stints at Le Mans five years ago would only have been able to cover one or two stints today. The performance of all the cars involved in endurance racing has evolved considerably.”

Competition between tyre suppliers in LMP2 is described as “extremely fierce”. Michelin expects improvements at Le Mans will be between one and one-and-a-half seconds per lap compared with 2015, while it adds that its partners should manage triple stints on the same tyres on a regular basis.

In addition to the work carried out on Michelin’s tyres for the LMP1 and LMP2 prototypes, the LMGTE Pro teams have also benefited from bespoke work by Michelin Motorsport’s engineers over the winter, with progress concerning both the casings and compounds to take the overall packages forward while ensuring a consistent delivery of performance as the tyres wear.

Simplify and grow – STARCO restructures in order to increase its OE ...