You are here: Home1 / News2 / Company News3 / Simplify and grow – STARCO restructures in order to increase its ... 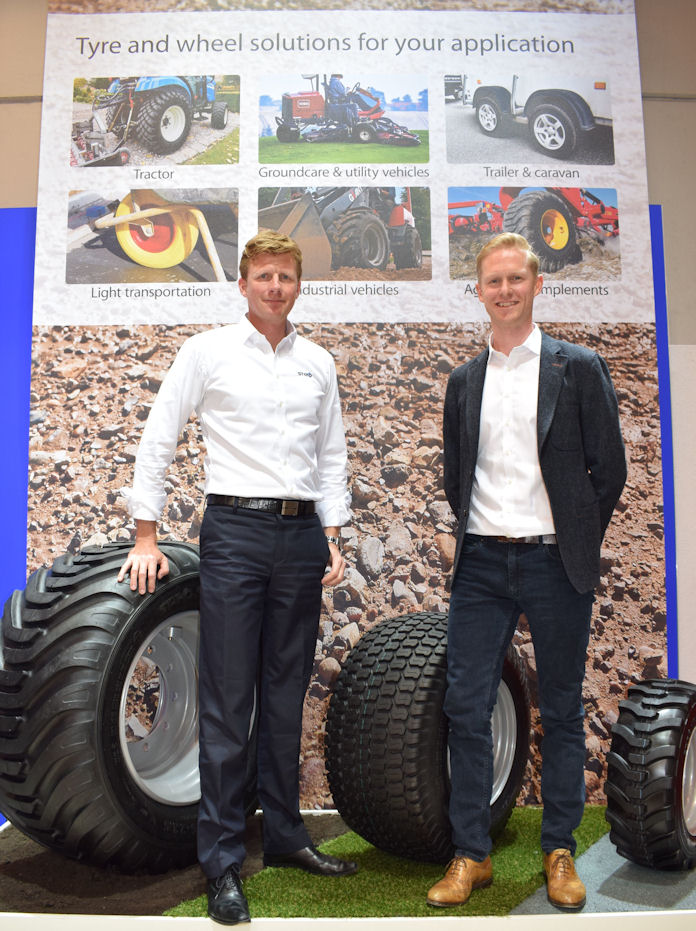 Change of any sort within an organisation can be difficult, says Richard Todd, but sometimes change is necessary in order to find the right area of focus and to grow in this. Upon becoming chief executive officer of STARCO at the start of last year, Todd took over the day-to-day management of a half-century old company on the cusp of starting the sizable task of redefining its focus and long-term direction. He began working on this in close collaboration with company owner, Peer Ejlergaard. Now, some 18 months later, this direction is clearly visible. At Reifen 2016, Richard Todd spoke about the structural reorganisation taking place within STARCO and the steps taken to realise it.

A major step in this reorganisation is the sale of several STARCO (the name, incidentally, is short for Scandinavian Tyre And Rim COmpany) aftermarket businesses to German wholesaler Bohnenkamp AG, a transaction announced only a week before Reifen 2016. “The Bohnenkamp deal is the result of a wider rethink about our focus,” comments Todd. “When we began looking at the STARCO strategy and where the company was going long-term, we not only saw that the company’s structure had become complicated. It was also apparent that STARCO’s original equipment and aftermarket operations were like two separate businesses, with each requiring a different set-up and unique skills. Of the two, it seemed clear to us that the OE segment offered STARCO much more growth potential, and from that point on we started to look for opportunities to simplify the business. That led into discussions with Bohnenkamp around a year ago.”

Should the relevant authorities grant their blessing, at the start of July Bohnenkamp will take over several business areas belonging to STARCO, while the Danish company will assume responsibility for certain activities currently within the Bohnenkamp portfolio: As of 1 July, the STARCO Eastern Group, which covers Russia, Belarus, the Baltic region, Kazakhstan and Ukraine, and Starco’s aftermarket business in Scandinavia, Germany and the Benelux countries (excluding business with dealers and importers of passenger car tyre trailers in the Benelux) becomes part of Bohnenkamp. With this development, the German wholesaler will significantly extend its product range in small tyres and will increase its market for products it already offers. A total of 160 employees – 130 from the Starco Eastern Group and a further 30 from STARCO aftermarket businesses in Germany, Scandinavia and the Benelux countries – will transfer to Bohnenkamp. At the same time, STARCO is taking over Bohnenkamp’s original equipment passenger car trailer tyre business in Germany and Slovakia.

At Reifen, STARCO showed a number of key products and had specialists on hand to answer any questions

Focusing a business and driving growth over the long term requires making tough decisions. Richard Todd shares that the company expects its turnover to drop by around 25 per cent in the short term as a direct result of divesting these aftermarket businesses., however he views divesting in the aftermarket a necessary step in simplifying STARCO so that it can focus on areas identified as strengths for the coming years. “We believe it gives us a platform to grow much more in the long-term, as set out in our 2020 strategy.”

Following the transaction, around 80 per cent of STARCO’s business will take place in the original equipment segment, and this proportion is expected to rise going forward. “There are still significant areas to grow in within the market footprint where we operate, and given the right partner and the right long-term relationship, we’re also willing to look outside of the area where we’re operating now,” the CEO comments. “As we showed when we moved into Poland with Husqvarna, we’re interested in partnering with large OEMs that operate on a global footprint.”

The agreement with Bohnenkamp is very much in line with the vision of former STARCO chairman and principal shareholder Peer Ejlersgaard, whose untimely death at age 56 stunned the industry in March. Although Ejlersgaard handed the day-to-day running of STARCO over to Richard Todd at the start of 2015, he remained actively involved in the company and was closely connected with the negotiations. “The deal reflects Peer,” comments Todd. “I know he would have been proud of the business that we are handing over, it grew 15 per cent compared to last year in the first quarter of 2016, and it was key to Peer and to STARCO to hand over a good, strong business that will prove successful for Bohnenkamp for many years to come.”

Working towards ‘One STARCO’

As touched upon earlier, the deal with Bohnenkamp arose out of the decision to simplify STARCO so that it better meets market demands. As Todd recalls, STARCO was a series of companies working independently within regions. “Over the years we’d moved from being a trader and much more into manufacturing. We had a huge number of OE sub-segments and there wasn’t much alignment within the organisation. Each different STARCO national entity worked quite autonomously.” Once the decision to restructure had been taken, the company sought out an OE specialist who could facilitate the required changes. They found Thomas Ballegaard, who brought to the company a wealth of experience gained working with OEMs and suppliers within the wind turbine industry.

Following a decade with Vestas Wind Systems and several key suppliers, Thomas Ballegaard joined STARCO as chief commercial officer in October 2015, tasked with leading the company’s go to market approach and introducing a successor to the national entities. “The key word is structure,” states Ballegaard. “I’m there to set the structure and to coordinate sales activities going forward.” Together with the management team working under Todd, Ballegaard has worked towards implementing a more aligned organisation, one based upon customer segments across the whole value stream.

“The national entities still exist in a legal sense but our daily operations with OEMs across Europe now involve us working in segments,” Ballegaard shares. We’re organising according to segment and will have one strategy for each. We’re working on this as we speak.” Summing up the increased OE focus and the move to a segment approach, Ballegaard comments: “It all links together – the Bohnenkamp deal links into the ‘One STARCO’ strategy as it gives us the chance to focus on OEM more strongly than we could before, of course without neglecting our aftermarket customers.”

One STARCO, Richard Todd comments, is the name of the company’s 2015 to 2020 strategy, and the phrase is used internally to describe the drive to become a more unified organisation that is aligned to its customers. He adds that it also refers to the adoption of an outside-in approach, and this is also an area where Ballegaard is helping STARCO. “One of the reasons for bringing Thomas on board was that while we’ve got a lot of skills within STARCO and our sales organisation, we’ve always very much been an inside-out company. One of the key things Thomas brings to the organisation is to focus on the market and drive the organisation to become an outside-in company.”

Ballegaard says that breaking down the national entities has been a “massive step” and that there is much to coordinate. As for the seven OE segments that replace the national entities in the new STARCO structure, the chief commercial officer says each will have its own individual strategy. “One size doesn’t fit all. Our customers have differing expectations. We’re working with customers on our strategies.”

Trailer and caravan is currently the largest of the segments, and Ballegaard says that after having acquired customers in new markets from Bohnenkamp it is in a good position to grow and to become the an even stronger partner in wheel and tyre solutions. “We are already the market leader in some areas,” he adds.

Ground care and utility vehicles is another strong segment thanks to STARCO’s original equipment supply to Husqvarna. “We supply to a large proportion of their ride-on mowers in the European market, and we aim to extend this arrangement to further OEMs.”
STARCO hopes to repeat the success enjoyed there in its Agricultural implements segment. “We’re investing in new developments,” shares Ballegaard. “We want to get our foot in the door with some big OEMs and prove our value propositions. If we can do it in horticulture we can do it in agriculture, especially when we introduce some new developments later this year.”

The fourth segment is Tractor, and the chief commercial officer shares that STARCO holds a “solid position” in compact tractor based on some partnerships with suppliers in individual markets. “We want to launch these on a pan-European basis.”

In the Industrial segment, Starco is the market leader in site dumpers, and Ballegaard says the company has “an ambitious strategy” for forklift trucks.

One Aftermarket – One strategy

The eighth STARCO segment is the Aftermarket. The company has retained its aftermarket activities in the UK, France, Poland, Switzerland and South Africa. Todd says these will continue to be an “important part of the business,” Todd stresses that there is no plan to divest the remaining aftermarket businesses. STARCO is aligning its aftermarket strategy across borders and thus still taking national demand into consideration.

“The value we’ll provide the customer in each respective segment will be slightly different, but the common denominator is close, long-term partnerships and a focus beyond that of just price,” Thomas Ballegaard explains. “We want to partner in the design phase and are willing to follow the customer. We’re called STARCO Europe, but if an OEM invites us to join them in the US or China, we will be there, we’ll follow them. Within the next few years we’ll have developed the skills and the experience to follow OEMs in all our segments.”

While most tyres STARCO supplies to customers (including many STARCO-branded products, which account for 35 per cent of all tyres the company fits) come from the Danish company’s strategic, long-term suppliers, which include Kenda, Deli, GT Radial, Deestone, Heng Feng, TVS and Nokian, Richard Todd relates that STARCO now manufactures more than 95 per cent of the wheels it supplies. “We’ll continue to invest in our manufacturing capabilities and they’ll be much more focused and aligned with the rest of the organisation to make sure we do have a continuing improvement,” he comments. “Furthermore, it’s really important that we don’t just partner at the front end with our customers, but through the entire value chain, thereby further developing the strong partnerships we already have with our key suppliers.”

It’s still early days for STARCO’s new organisational structure, however Richard Todd has high hopes for the seven original equipment segments. “We aim to deliver clever wheel and tyre solutions,” he states. “Our new vision is that we want to be recognised within all seven segments. Looking ahead five to ten years, if people talk about wheel and tyre solutions for OEMs within these segments, it should be STARCO that everybody thinks about.”     stephen.goodchild@77.237.250.82