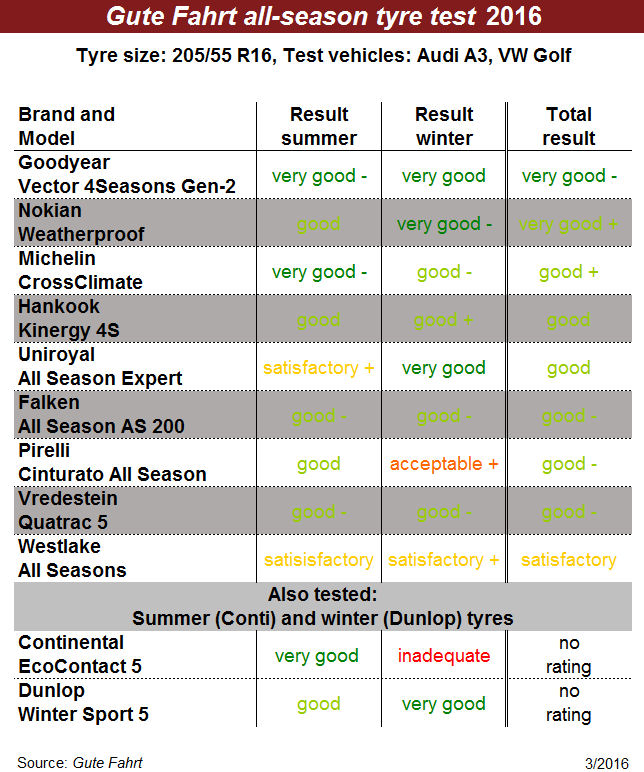 It isn’t just assessment time for summer tyres as the warmer months of the year approach. Gute Fahrt magazine, a German publication aimed at VW and Audi aficionados, has put nine all-season tyres to the test, and this is good news for UK consumers who are taking to this product segment in growing numbers. The tyres were evaluated for their summer characteristics (wet and dry braking and handling, rolling resistance, noise and comfort) as well as their performance in the snow. All-season mastery of the various weather scenarios was also compared to the characteristics of dedicated seasonal rubber, as the Gute Fahrt testers also included a summer and a winter tyre in the test.

The size 205/55 R16H/V tyres were fitted to an Audi A3 saloon and a VW Golf (for snow tests) and evaluated in ten different categories. After tallying up the points gained in each, the Gute Fahrt test team declared that “Goodyear builds the best all-season tyres.” The Goodyear Vector 4Seasons Gen-2 was named test winner and stood aside from its rivals as the only tyre out of the nine to gain a ‘very good –’ rating; the testers lauded both manufacturer and tyre: “With the new Vector, all-weather pioneer Goodyear has fielded all its experience from past decades. And for this reason it is unbeatable.”

Summer testing was conducted with an Audi A3

Praise was also showered upon two further tyres, the Nokian Weatherproof and Michelin CrossClimate; both received Gute Fahrt’s recommendation and gained a ‘good+’ rating. The only criticism levelled at the Nokian tyre was its understeer, while the Michelin couldn’t match the best in the lateral aquaplaning test.

A ‘good’ rating was given to the Hankook Kinergy 4S and the Uniroyal All Season Expert, while the Falken All Season AS 200, Pirelli Cintuarato All Season and Vredestein Quatrac 5 received the slightly downgraded ‘good –‘ rating. Last in the test, but with a rating of ‘satisfactory’ definitely not disgraced, was the Westlake All Seasons. To the question of whether the Westlake brand from China can hold its own against the established brands in the all-season market, the Gute Fahrt testers respond with a yes and no. The All Seasons performed well in the snow and in the wet circular track test, however it couldn’t match the competition in most wet and dry disciplines. The Westlake tyre had the longest wet braking distance and poorest aquaplaning performance, notes Gute Fahrt.

While a VW Golf was used for the winter disciplines

Had the Continental ContiEcoContact 5 summer tyre received a report card along with the all-season tyres, it would have been pleased with its ‘very good’ rating in the summer tests – but not so happy about the ‘inadequate’ rating given for its snow performance. The Dunlop Winter Sport 5 winter tyre, in contrast, would have aced the snow testing and received a ‘very good’ rating for it, while its summer performance would have sufficed for a ‘good’ rating – better than or equal to the rating given to eight of the nine all-season tyres. As non-competing benchmark tyres, the summer and winter rubber received no final, overall rating.