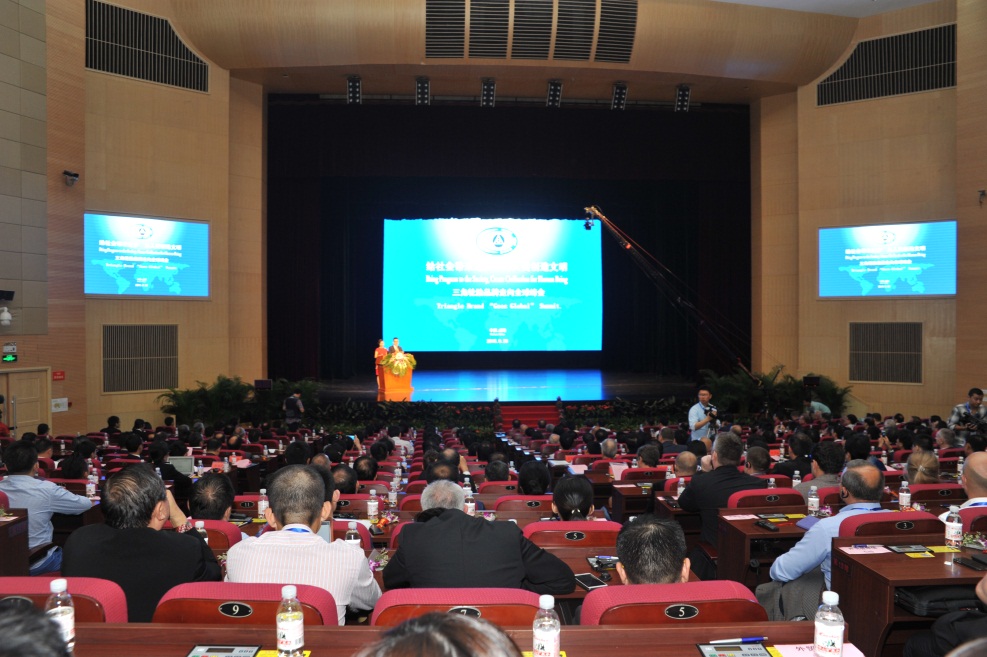 Triangle Tyre’s recent summit at the company’s headquarters in Weihai, Shandong Province continues the firm’s recent movement towards going global. The theme was “bring progress to the society, create civilization for human beings”, which when culturally translated speaks of the firm’s intention to be a CSR-conscious global player. According to the company, more than 400 customers were present including representatives of the likes of Caterpillar, Lanxess, Bekaert and VMI as well as the media researchers and scholars from different countries.

As you can imagine, the summit focused on Triangle’s progress toward building a global brand, technology development as well as discussing the opportunities and challenges Triangle and Chinese businesses as a whole face in what locals euphemistically refer to as “the new economic conditions”. For Triangle, the answer is to “establish and improve the cooperation between company and partners”. Whether or not that means further domestic market consolidation is on the horizon, whether there will be closer cooperation with existing partners or whether there will be some combination of the two is not clear.

Ding Yuhua, chairman of Triangle Group, made a speech entitled: “Build brand economy, Achieve global development”. During the speech he expressed that Triangle regards brand as a “core competitiveness of its development”. He continued by explaining that, in the process of transforming Triangle from a Chinese local brand to a global brand, the company has “successfully realized product renewal, brand awareness and [on]going globalization by emphasizing on innovation as well as regarding improving technological development, safety performance, environmental protection performance and energy-saving performance as key points.”

Triangle Group was founded in 1976 and has grown rapidly since then. Part of this development saw the firm upgrade from bias tyre production to radial tyre technology between 1992 and 2000. The range of radials now on offer includes passenger car, truck and bus, OTR and large OTR tyres. Triangle reports that it sells 25 million tyres annually to customers in over 170 countries and the export share of its production has reached 60 per cent. As we have seen the company has ongoing OE relationships with leading players – especially in the OTR sector – such as Caterpillar, Volvo, Terex, Liebherr, GM, Daewoo, Doosan.

Now Triangle, as a member of the China national tyre rim Standardization Technical Committee as well as initiator and president of China tyre industry technology innovation strategic alliance, has built “National Engineering Laboratory for tyre design and manufacturing technology”. Despite other tyre research and development facilities residing in China, Triangle reports that this facility is the only one of its kind in the Chinese tyre industry. In recent years, Triangle group has organized and participated in the formulation of national and industrial standards (35 items in total). And it has participated in “United Nations World vehicle regulations coordination Forum” (UN/WP29) five times and organized the formulation of international “Test method for TKPH value of OTR tyre”, again the first of its kind in the Chinese tyre industry.

Reinforcing the brand-building theme, during the conference, Deng Yali, chairman of China Rubber Industry Association (CRIA), said in her speech that Triangle is not only an important manufacturing base for China, but also the excellent representative of Chinese brand globalization.

In Triangle’s words: “The one who has excellent brand can have customers, markets and future. Chinese tyre firms should build remarkable brand globalization by intelligent manufacturing, ‘internet+’ and big data to improve competitive advantage, overall image of ‘made in china’ and core competitiveness, which could promote rapid growth of industry economy and realize the leap of Chinese manufacturing.”

“We have learned that after years’ of development, Chinese tyre industry has formed complete industrial system and now China has become the largest tyre producer and consumer in the world. However, there are some bad situations in domestic tyre industry, like overcapacity, weak capability of independent innovation and brand influence. Chinese brand must establish green, safe, high-end and personalized new brand image to improve global commercial value during its globalization.”

With this in mind, what we can learn from this conference is that – both at Triangle and in the Chinese tyre industry – there is now a real recognition that brand building is important for continuing competitiveness. How long it will take to achieve many Chinese firm’s aspirations of global brand recognition is another question.