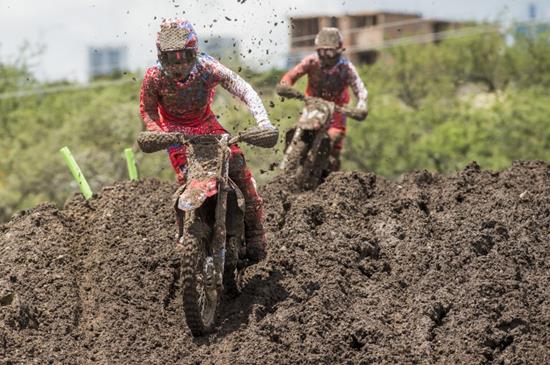 The penultimate event in the FIM Motocross World Championship, the MXGP of Leon in Mexico, saw Dunlop riders Shaun Simpson (KTM) and Evgeny Bobryshev (Honda) finish in second and third places. Gautier Paulin was in line for a top finish but a crash in the second race saw him drop to sixth overall.

Overnight storms before race-day turned the track conditions to treacherous. Most riders opted not to ride in the warm-up and the conditions were extremely difficult in race one. By the later second race the sun had dried the track to an extent and riders were better able to return to the more usual racing lines. The muddy conditions led to all Dunlop riders using the soft-medium terrain Dunlop Geomax MX32.

The finishing positions keep the championship battle for second between Team HRC team-mates Paulin and Bobryshev open going into the final round. Simpson’s second place overall increases his advantage over Nagl for fourth place; he currently has a 40 point advantage with a maximum of 50 available.

In MX2, Benoit Paturel took third place with Valentin Guillod rounding out the top six. Three Dunlop/Yamaha riders have now secured top-ten championship finishes with Guillod the highest in fourth, Julien Lieber in seventh and Paturel in ninth with one round remaining.

The final round of the MXGP series takes place in the USA on 20 September. Dunlop’s MXGP teams last raced at the Californian Glen Helen track in 2011 but Dunlop also has extensive information from the many Dunlop teams that compete on the same tyres in the USA. The track contains mixed conditions ranging from sandy to harder hill sections for which Dunlop is recommending the Geomax MX32 soft-medium terrain option.

The grand prix will see the second and third places decided between Honda riders Paulin and Bobryshev who are separated by 27 points while fellow Dunlop-rider Shaun Simpson will battle on his KTM to maintain and claim his fourth place in the standings.

Eddy Seel, Dunlop MX race coordinator, said: “This weekend we secured second and third in the Championship which is great. All being well with Shaun at the weekend we could also have fourth – three out of the top four is a fantastic result. Obviously we would like the title too but Febvre’s performance this year has been fantastic. The racing in Mexico was very difficult so I’m pleased we managed to take three podium finishes out of the six and hope we can finish the MXGP season with a few more in the USA.”