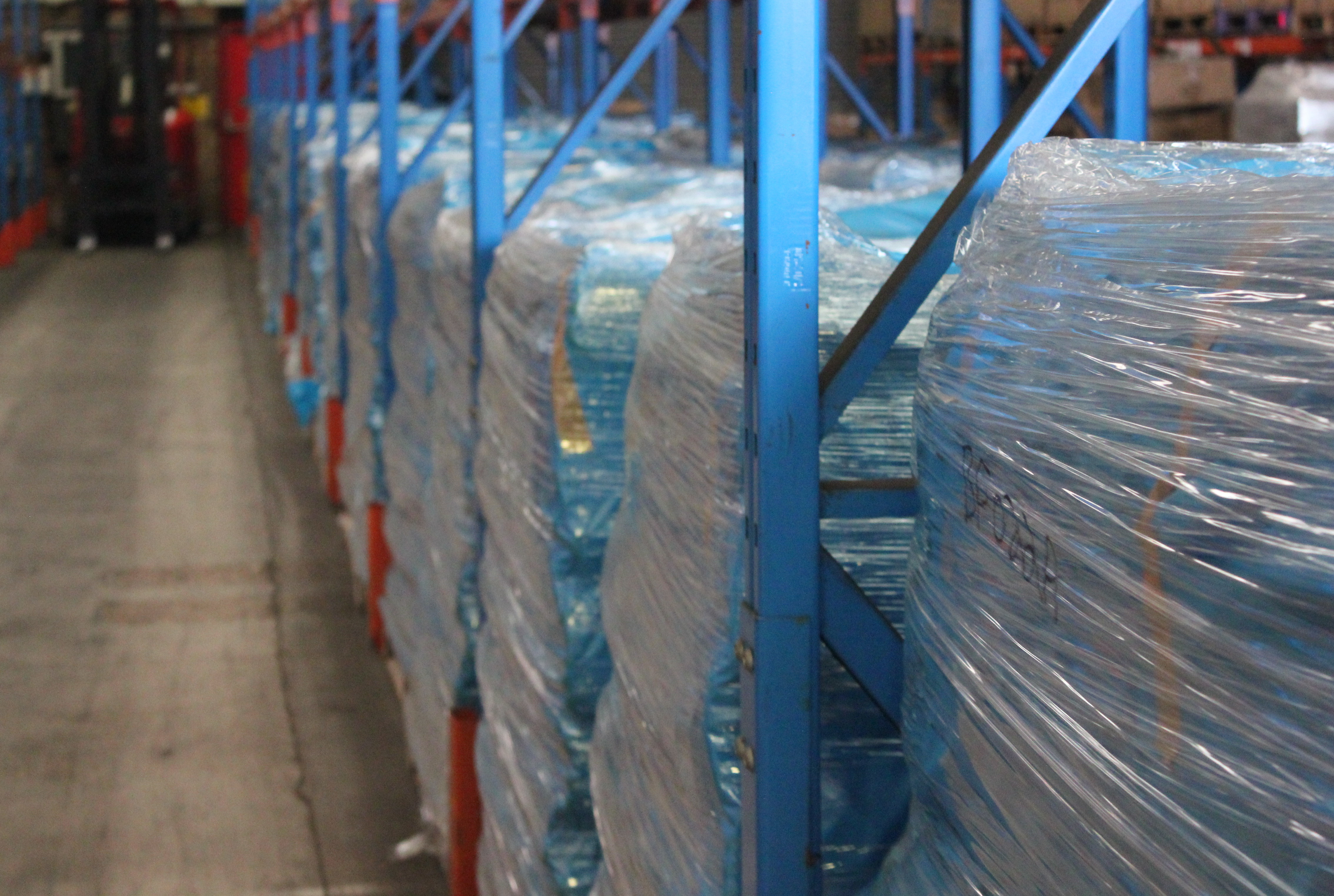 By the end of 2015, 100 tonnes of pre-cure strips and 150 tonnes of hot-cure compound (pictured) will be stocked in the UK warehouse

At the end of 2014, Brazilian retreading material supplier Vipal reported that it had opened a UK distribution centre in the East Anglian port of Felixstowe. However, the recent opening is more than just an example of an expanding operation in one European market, rather it is an example of how the company is growing across the continent. Tyres & Accessories met up with Vipal Europe general manager Alessandro Campos and East and region sales representative, Michal Baxa at the company’s new distribution facility to find out more.

There are two main reasons why Vipal opted to start up its own distribution operation in Felixstowe. Firstly, because maintaining its own stocks helps the company offer a better service to existing clients as well as to make a better offer to future customers. The second reason, which is as much a reason for choosing Felixstowe as a location in particular as it is about the business strategy behind the move, is because it is a lot more cost effective to deliver direct to a port-side warehouse than to distribution centres in Birmingham, Stoke or Manchester, for example. While a warehouse in Felixstowe may sound like it’s a long way away from cities and main customers, logistically speaking it makes more sense. Putting a warehouse in a big city would basically mean the firm would be double-handling its stock as well as doubling the transportation costs (port to warehouse and warehouse to customer). Bearing in mind that Vipal’s European products are manufactured at the firm’s international-market orientated factory in Brazil, the ship-to-warehouse-to-customer model costs less and gets product to the customer faster. Indeed, this approach is becoming something of a tried and tested model for Vipal, with the company virtually repeating what it already has in place in Germany and Spain and Slovenia.

So why now? In Campos’ words, Vipal’s business philosophy is combination of the US and Japanese mentalities – while it may sometimes take a while to make decisions (like the Japanese business stereotype), when something is decided it gets done “yesterday” (like the Americans). Look a little closer at what has happened in the UK and this is pretty much exactly what has taken place – although rather than happening yesterday it actually happened yesteryear. While Vipal made the UK warehousing announcement at the end of last year, the UK operation which runs out of that space was actually founded at the start of 2014. So while T&A was visiting the company’s new warehouse for a “first look” towards the end of January, it was actually closer to the operation’s first anniversary. However, this way, rather than looking round an empty warehouse, what we saw was the result of the best part of a year’s stocking-up.

Vipal’s presence in the UK began in 2007, when the firm started supplying Vacu-Lug (one of the UK’s two biggest independent retreaders). For the next seven years, the firm built this connection and other relationships up with product supplied via its Hamburg, Germany warehouse. However, the idea was proposed a couple of years ago and in mid-2013 it was decided that the next Vipal warehouse would be in the UK.

The first phase of the stocking procedure involved the transportation of some specifically UK-designed treads from the Hamburg warehouse to Felixstowe. Then, a number of important product lines began to fill the racks. By the end of the first quarter of 2015 there will be 100 tonnes of pre-cure strips and 150 tonnes of hot-cure compound (plus a smaller amount of gum and other retreading products) stored in Felixstowe. But there is room for more – the new 2,000 square metre Vipal centre has the capacity to store up to 500 tonnes of products.

Of course, as well as the points discussed above, this also has logistics and forecasting benefits. Specifically it means Vipal can now offer weekly delivery inside the mainland. Currently the Brazilian firm is doing this for Vacu-Lug and a pre-cure customer, but because the new operation is in place it is now also feasible to do it for others too. The Felixstowe location also means that delivery times are as little as one to two days, as opposed to having to leave an extra week – something that is especially good for some of the smaller UK retreading operations that tend to place orders on a needs-must basis. Indeed this latter point was another strategic reason for opening the UK warehouse – in order to be able to make a more attractive offer to the smaller and medium sized retreaders on these shores.

Something the company can be more definite about is the expansion in the number of Europe markets the company is present in and of course the number of boots on the ground, so to speak. Having founded an Italian office in December 2014, the latest news is that this officially opened for business in January. There is no warehouse planned in Italy at this stage as the firm’s logistic operation in Slovenia is sufficient to deliver here.

However, what this does indicate is that the company’s market share has increased significantly over there years and is still on the up. The fastest increase has been in the Italian market, where the company grew from a relatively low base. This also means that – thus far – the impact of Vipal’s presence has not been felt by the company’s strong and well-known local competitors.

The company also reports growth in Bulgaria and Slovenia. Other markets experienced a levelling off of growth. Tonnage was only down here and there – and changes in distribution partnerships in certain markets broadly accounts for this. In the UK, as you can imagine, sales were said to have been up. Looking forward into 2015, there are “very good expectations” following “very good negotiations”. Of course the outcome from such positive talks is likely to point to growth in the UK and Europe during the course of this year.

Increased opportunity for Vipal and retreaders in general

With the latest ETRMA new tyre figures published just days before we met in January, it was interesting to learn how Campos and Vipal see the retreading market’s progression in terms of the wider truck tyre parc. All in all growth in ETRMA numbers is seen as a positive indicator for the medium term health of the retreading sector. With more new ETRMA member (and therefore premium) tyres entering the market, this means more and better casings, which in turn means opportunities for retreaders. Therefore the 2015 retreading market could be up by between 3 and 4.5 per cent as a whole.

Furthermore the fact that all major EU markets are reporting an increase in new ETRMA member truck tyre sales (with the exception of Poland) also by necessity means there will be less bottom-end Chinese tyres sold, which can’t be retreaded (and so don’t contribute to the casing market) and which are priced as competitors to retreaded products.

So what does this mean for Vipal in particular? Without going into country by country market shares, suffice it to say that Vipal can now talk of double digit positions in a number of key European markets. In some cases this means substantial shares that overtake some of the best known suppliers. Other markets are further away from these levels, so the emphasis across Europe is on developing customers into stronger partners via the greater utilisation of point of sale and branding materials for those opting to source 90 to 100 per cent of their retread and repair materials from Vipal.

The goal is to become the first choice retreader after the new tyre manufacturers and therefore global market share of 20 to 25 per cent. As we have already seen, some countries are closer to this than others. Southern Europe is where Vipal is numerically strongest, while the UK is roughly midway towards the goal. As far as eastern Europe is concerned, with a distribution centre in Slovenia, Vipal has built up a decent market presence in a relatively short time. In Bosnia and Serbia things are said to be going “very well”. Romania was a new market last year, but already good sales are being experienced. Vipal has a very strong position in the small Croatian market and is simply dominant in Slovenia. The company hasn’t finally decided if it will go as far east as Russia yet – it is a question of feeling this out with exercises like exhibiting at the Tires & Rubber show in Moscow over the next weeks and months – but the firm’s overall position is clearly both strong and growing.