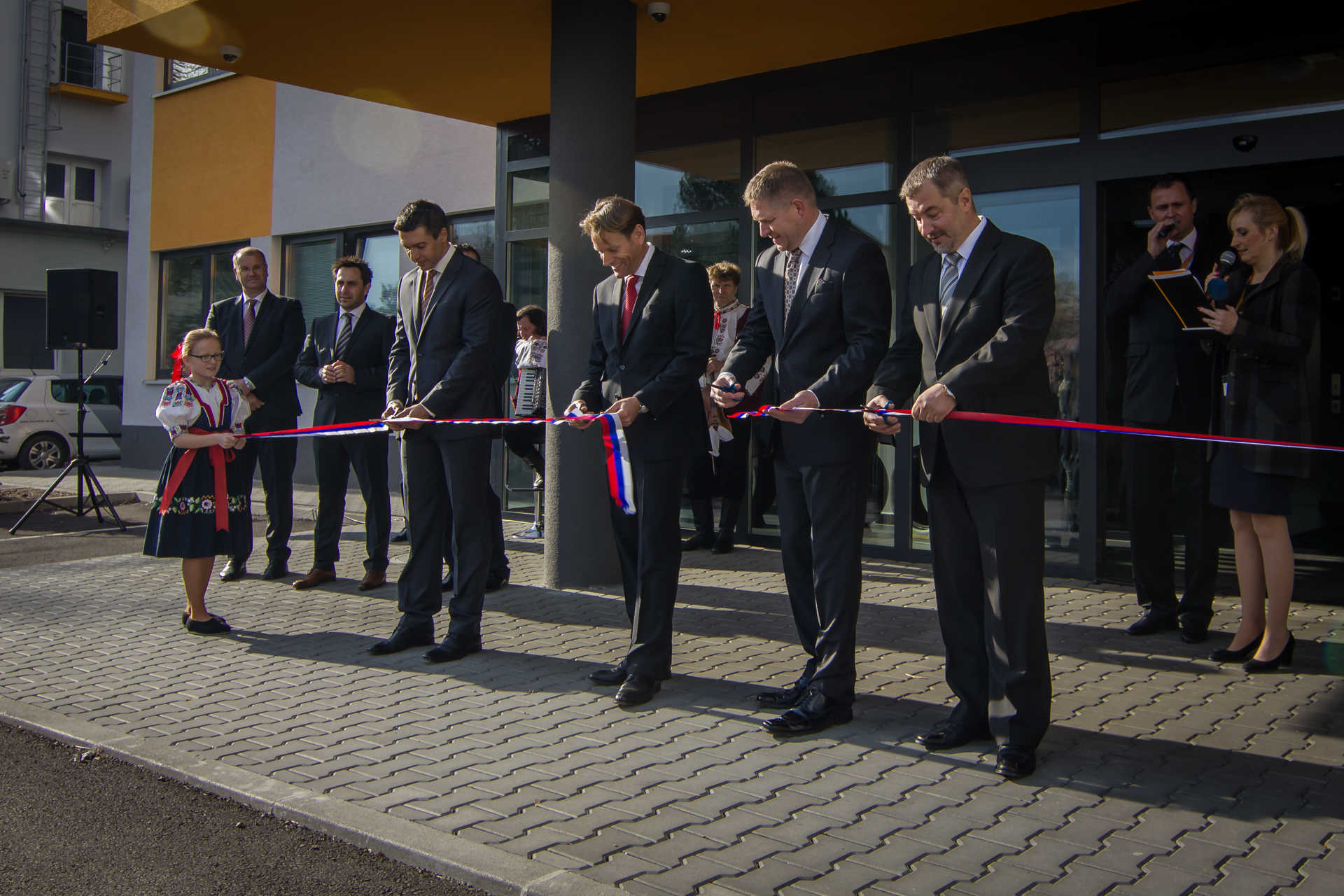 Cutting the ribbon at the enlarged Púchov R&D facility

Continental is gearing up to increase its research and development workforce by 15 per cent at its Púchov site in Slovakia after the official opening of its expanded facility there. The company held an opening ceremony at its new Tires Technology Center today in the presence of Slovak Republic Prime Minster Róbert Fico, Continental Tire Division head Nikolai Setzer and representatives from local management and the workforce. The additional research and development capacity at Púchov was realised through a €7.5 million investment.

“Today’s celebration marks another successful step towards reaching our ‘Vision 2025’ and establishing Continental as global tyre manufacturer of choice. With the Tire Technology Center in Púchov and its highly motivated employees we will be able to further enhance our research and development capabilities and lift our premium, top technology products on the next higher level for our customers”, stated Nikolai Setzer. “The long tyre tradition and expertise in the Púchov plant, the high commitment of its workforce and the constant very close collaboration with the national and local government has driven our decision to invest here in Púchov and we are very confident, that as well this project will be another success. To all involved, I would like to express my sincere thank you.”

In April 2013, Setzer and Róbert Fico signed a Memorandum of Understanding that will see passenger car, light truck and 4×4 tyre manufacturing capacity in Púchov potentially expanded by more than five million pieces, depending on market development, in the coming years. The new Technology Center will support the plant’s development, enabling Púchov to combine extended research and development know-how with advanced tyre manufacturing expertise in one location.

The new three-storey building’s cornerstone was laid in June 2013. “The new building of the division of the Technology center Púchov (TCP) is part of the project called TCP/GEP Campus. This project, running from 2012 until 2016, exceeds the value of €7.5 million and includes the reconstruction of the facade of the existing TPC building as well as the construction of the new Technology Center building Púchov (TCP),” said centre director Libor Heger. “It does comprise also the construction of the new testing centre performing drum tests for tyre durability, tyre analysis and ContiKit tests, as well as the interconnection of the existing and new TCP building by a so-called ‘skywalk’ on the top floor.”

Rubber research and development has taken place at the Púchov since 1987, when the Rubber Research Institute was established. Since then, Continental has built up its R&D activities there and currently employs around 185 people, including some 105 employees in research and development activities and 80 in the field of raw material and material testing as well as new product testing. The 15 per cent expansion to this workforce will take place by 2016. The Technology Center in Púchov is closely connected to the central Continental Research and Development Center operated by the company’s Tire division in Hannover, Germany, which employs about 1,200 engineers, chemists, and other experts in the development of new consumer and commercial vehicle tyres.

Both Continental’s Automotive and Rubber groups are present in Slovakia, in the cities of Púchov, Zvolen and Dolne Vestenice. The Continental matador Rubber tyre plant in Púchov manufactures tyres for passenger cars, 4×4 cars, light trucks and trucks, as well as conveyor belts. The plant’s production capacity recently grew to more than 15 million tyres a year, and the number of employees there has increased to 3,700 since Continental became shareholder of the company in 2008. Various group brands are produced at the site, including Continental, Matador, Semperit, Barum, Uniroyal, Viking and Gislaved.

From shoe to sidewall – Timberland tyre range launches at SEMA

TPMS learn issue leads to Chrysler recall in the US