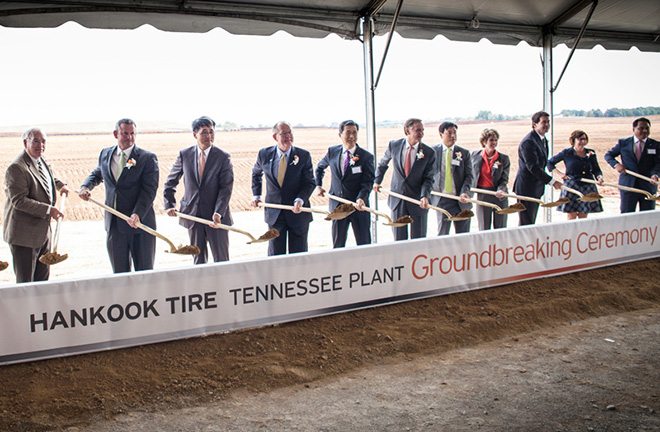 Construction work has officially begun on Hankook Tire’s new factory in the United States following a groundbreaking ceremony held at the plant site in Clarksville, Tennessee on 9 October. The new facility, which is expected to begin operation in 2016 and will reach a production capacity of 12 million units, is Hankook’s eighth production facility worldwide and first in North America.

The groundbreaking ceremony was attended by local and state officials, including State of Tennessee Governor Bill Haslam, who congratulated Hankook Tire on its achievement. The tyre maker’s vice-chairman and CEO, Seung Hwa Suh, told the attending guests that the groundbreaking in Clarksville marked an “important milestone” in Hankook’s 73-year history as a tyre maker. “The new Tennessee Plant will be a pivotal instrument to accommodate our growing business in the United States and also to propel a well-balanced global production portfolio,” he added. “Combined with our advanced technological capability, the newest plant will create premium value and solidify our presence as a top-tier player in the global tyre industry.”

US$800 million will be invested to construct the new plant, which is being erected on an aggregated land area of 469 acres (190 hectares). The facility’s opening will create around 1,800 full-time jobs in the region and will enable Hankook to supply much of its North American demand from within the region. “This will enable for a more efficient tyre distribution in the market and will open more opportunities to strengthen the business engagement with the US-based automakers for original equipment tyre supplies,” states Hankook. “Also, the additional production capacity from this plant will contribute to increase annual global production to over 100 million tyres.”

Hankook Tire has cumulatively invested in the United States over the last three decades, establishing its American Regional Headquarters in 1981 and Akron Technical Center in 1992. The announcement for the Tennessee Plant was made in October 2013 in conjunction with the State of Tennessee.