You are here: Home1 / News2 / Maxam goes large in Essen 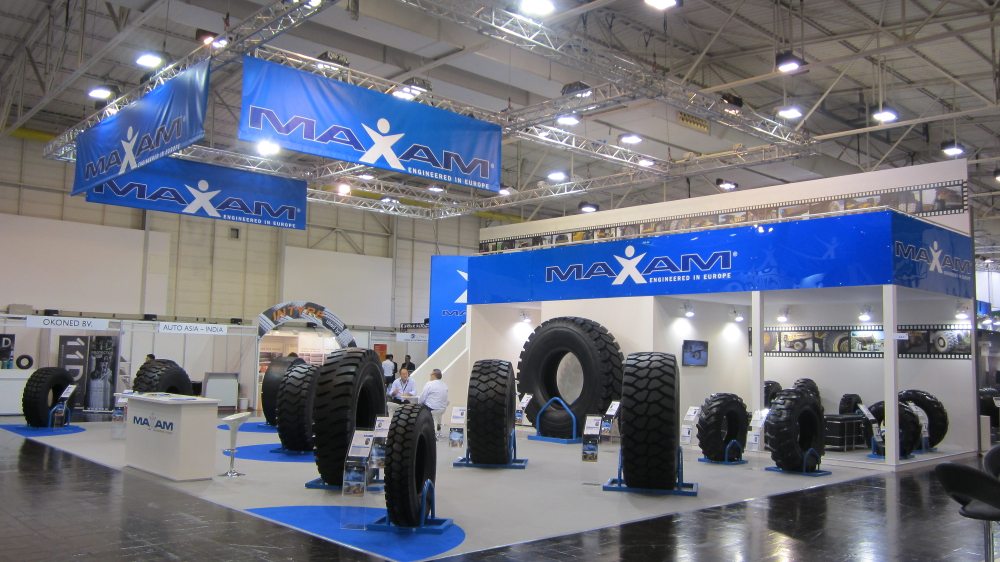 Maxam’s large stand was complemented by its proximity to UK exclusive dealer for construction and industrial pneumatic tyres, KRT

OTR brand, Maxam Tire showed 24 tyres from the company’s comprehensive range of radial OTR, construction and industrial tyres on a large stand in Hall 6. The MS401 dump truck tyre proved particularly hard to miss; the tyre has an overall diameter of 2.7 metres and weighs 1,497kgs.

Maxam CEO Ian Thomas declared himself ‘delighted’ with the visitors’ response, saying: “We wanted to make a statement and to show the extent and variety of our range – 24 tyres is the largest number we have ever shown at one time and our stand was busy throughout the show.”

The tyre manufacturer was represented on-stand by a large number of senior management figures, including Kevin Buckley, sales manager europe; Peter Kraus, BDM Germany, Switzerland and Austria; Stefan Blindenberg, BDM France, Belgium, Netherlands and Luxembourg and Anne-Gaëlle Halter, marketing coordinator. Joined by dealers from South America and Australia, Maxam’s presence was further enhanced by the fact that Kings Road Tyres – its exclusive dealer for construction and industrial pneumatic tyres in the UK and Ireland – were exhibiting in the same hall.

“Reifen is a great show to both meet new prospects and catch up with existing customers,” said Ian Thomas, “we will certainly exhibit at the 2016 show.”