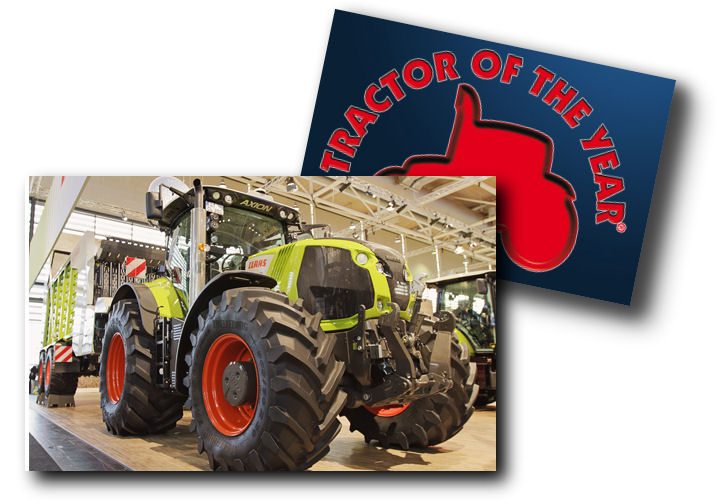 Last year’s Tractor of the Year, the Claas Axion 850

Once again, Trelleborg will partner with the Tractor of the Year awards. The latest round of this agricultural sector honour kicked off with an event in France on 6 and 7 May; at the “Tractor of the Year 2015: Let the challenge begin” function in Provence-Alpes-Côte d’Azur, the Swedish tyre maker also launched a new advertising campaign to promote the qualities of its TM1000 High Power agricultural tyre.

The launch of the 2015 awards was attended by representatives from 15 leading tractor manufacturers, along with an international judging panel of 23 journalists from European agricultural industry publications. The event provided manufacturers with a platform to showcase their candidates for the ‘Best of Specialized 2015’, ‘Golden Tractor for Design 2015’ and ‘Tractor of the Year 2015’ award categories. After assessing the performance this year’s nominees, the jury will announce the finalists for the Tractor of the Year awards 2015 in June. The final awards ceremony is scheduled to take place at the EIMA International agricultural trade show, which will be held in Bologna, Italy, between 12 and 16 November.

“Trelleborg has long led the way when it comes to innovation for farming professionals,” adds Paolo Pompei, president of Trelleborg Wheel System’s Agricultural and Forestry Tires business unit. “As such, we are delighted to further strengthen our long term partnership with the esteemed Tractor of the Year awards, demonstrating our commitment to fostering of the development of the agricultural industry.”

During this week’s Tractor of the Year event in France, Trelleborg introduced a campaign it calls “Trelleborg. Five hundred kilograms of lightness.” The Swedish manufacturer says the campaign reaffirms its “commitment to help secure a sustainable future for farming” and views it as being in-line with its “tradition of creating innovative campaigns.” The tyre maker offers the following campaign description: “The new campaign aims to visually represent the juxtaposition of both the lightness and sheer power of the high performance, 500 kilogramme, TM1000 High Power tyre in terms of its performance.”

The message Trelleborg aims to get across is that despite being one of the largest, widest and strongest tyres available on the market, the TM1000 High Power ensures the lightest touch on the ground, thanks to its wide footprint. “It provides farmers with unbeatable productivity while preserving soil health, thus ensuring higher crop yields,” the tyre maker shares. “In addition, its reduced rolling resistance results in low fuel consumption and emissions, helping farming professionals to produce more in a sustainable way.”

“Research suggests that by 2050, the world’s population will increase by as much as 30 per cent,” notes Lorenzo Ciferri, marketing director of Agricultural and Forestry Tires at Trelleborg Wheel Systems. “However, it is clear that the supply of natural resources simply can’t keep up. As such, agriculture has a fundamental role to play in meeting future environmental challenges. From Research and Development through to manufacturing, Trelleborg allocates considerable resources to guarantee the performance, reliability and safety of its products and solutions, always with total respect of the environment to help shape the future of agriculture.

“It is this commitment that lead to the development of our innovative TM1000 High Power tyre, which, utilising our BlueTire technology tread, significantly enlarges tread width and ensures an extra wide footprint at low pressure and an unbeatable floatation performance,” Ciferri continues. “This results in optimum pressure distribution on the ground to boost crop yield, while preserving soil from compaction and erosion. ‘Trelleborg. Five hundred kilograms of lightness’ further showcases that Trelleborg has long lead the way when it comes to developing innovations to boost the efficiency and productivity of today and tomorrow’s farming, while increasing the environmental performance of the tractor.”