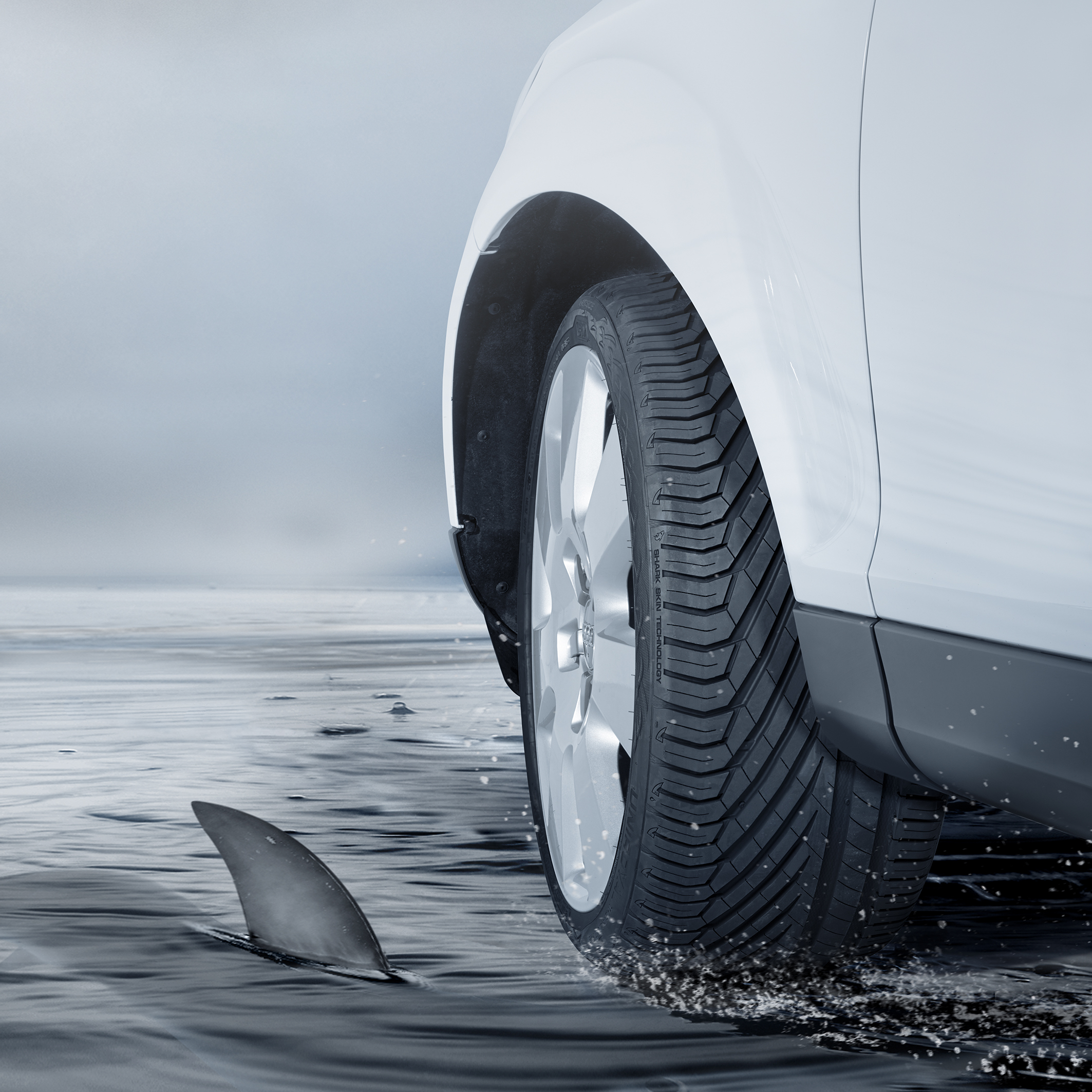 With the launch of the new RainSport 3 at the end of September, engineers at Uniroyal have developed what they call “a new generation of asymmetrical profiles combining the advantages of unidirectional tread concepts with those of asymmetrical tread concepts”. With its flow-optimized, asymmetrical tread, the Rainsport 3 offers a high level of protection against aquaplaning, precise handling on wet and dry roads, uniform abrasion, and comfortable driving behaviour.

A further measure taken by the Uniroyal tyre developers involved designing wet sipes that extend diagonally across the tread structure to form multiple gripping edges that act when the brakes are applied on wet roads. These are designed to allow the new wet tyre to grip the road extremely effectively, thereby offering additional adhesion.

On top of this the rigid blocks of the tyre shoulder as well as their flexibility in the circumferential direction come into play here. This means that the forces generated during cornering are reliably transmitted while the large ground contact surface can adapt perfectly to the road. With a view to achieving the best possible driving experience, the number and size of tread blocks have been designed such that they run into the ground contact surface differently and generate uniform noise emission. According to the company, this minimizes tyre and road noise and helps to ensure uniform tyre abrasion.

Rolling resistance reduced by 14 per cent

When it comes to performance measurements, the new Uniroyal RainSport 3 clearly outdoes its tried-and-tested predecessor. For instance, braking distances on wet roads have been reduced by 8 per cent, handling improved by 4 per cent, and rolling resistance reduced by 14 per cent.

As consumer demand more performance from their cars as standard, so the tyres fitted to the vehicles have to keep pace. This is reflected by the OE trend towards ever bigger tyres with higher speed approvals, which continues unabated in Europe. In parallel with this, sales of summer tyres suitable for speeds of more than 210 km/h are expected to grow considerably between now and 2017. The main beneficiaries of this will be tyres of 18 inches and more, although demand for 16 inch tyres is also expected to increase.

Demand for larger tyre formats with higher speed approvals is growing in the replacement business too. Uniroyal is expecting demand to particularly increase for tyres approved for speeds in excess of 210 km/h. This means that growth of around 4 per ecnt in the market for tyres in speed classes V, W, Y, and Z (approved for between 240 km/h and 300 km/h) is expected throughout Europe between 2008 and 2017. Meanwhile sales of H-rated tyres are expected to remain stable, while demand for tyres with lower speed approvals (speed indices R, S, and T) is likely to fall.

However, it is not just in terms of speed classes that newer vehicles are looking for that little bit extra. Demand for larger tyre sizes is also increasing among vehicle manufacturers and end users. While the larger rims are necessary from a technical point of view in order to accommodate the brakes designed for higher speeds, drivers in Europe want to give their cars a sportier look by fitting rims that are larger than standard to make them stand out from the crowd. As a result, rims with diameters in excess of 16 inches are becoming increasingly popular, with sales having increased by 4.5 per cent over the last five years. But it is the rims in the 17, 18, 19 inch (and more) segmetn that are seeing the biggest growth. Since 2008, rims with diameters of 19 inches and more have increased in popularity among users by almost 60 per cent. Uniroyal representatives hope this will put the new Uniroyal RainSport 3 in a strong position.

The RainSport 3 product range contains 106 items, 13 of which are specially designed for SUVs. Uniroyal has also incorporated 14 new sizes in its product range. The new tyre is manufactured in 55 to 30 series and is suitable for wheel rims between 14 and 21 inches. Speed ratings are as high as 300 km/h (SI Y).