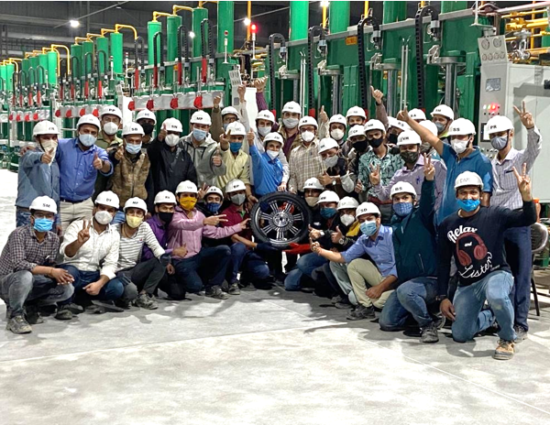 Members of the production team pose with one of the first tyres made in the new plant (Photo: TWS)

Trelleborg Wheel Systems (TWS) has confirmed a timetable of beginning volume two-wheeler tyre production at the SYAM Trelleborg Tires LLP joint venture factory “by early 2022” following the start of trial manufacturing last December. With the plant’s entry into operation, TWS looks forward to an increased production capacity of two-wheeler tyres that not only “contributes to consolidate market presence” in southeast Asia, a region where two-wheeled vehicles are in great demand, but also “augmenting motorcycle operations across Europe and North America.”

The joint venture plant results from an agreement signed with Yogesh Agencies & Investments Private Limited (YAIPL) late in 2018. As mentioned in previous articles, the facility is located in Bharuch, Gujarat State, with YAIPL – the family holding company of Ashok Mahansaria and his son Yogesh – owning a 76 per cent shareholding. Mahansaria will distribute the tyres throughout India as well as in the SAARC markets of Afghanistan, Bangladesh, Bhutan, the Maldives, Nepal and Pakistan.

In a statement, TWS said the partnership with YAIPL allows it to “strengthen its position in this attractive market segment and solidify its presence in parts of Asia.” The owner of the Mitas two-wheeler tyre brands adds that this new facility “boasts highly automated systems run with the most advanced technologies the world has to offer.”

Falken Tyre Europe to hike continental prices 9% in May