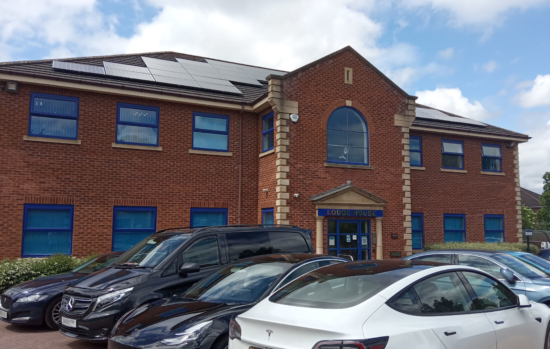 Lodge Tyres has been located in its modern Stafford headquarters (pictured) for roughly four years, having outgrown its earlier Birmingham headquarters. And Lodge Tyres remains “a hungry, happy, and progressive independent business”, according to managing director Andy Christmas

Following Halfords’ recent acquisitions of Universal Tyres and McConnechy’s before that, many have speculated regarding what the future holds for Lodge Tyres. Rumours aside, the short story is that Lodge Tyres had a good 2020 despite the obvious Covid-19-related adversity and is set for further growth in 2021. Tyres & Accessories met with Lodge Tyres managing director Andy Christmas and commercial director Martin O’Brien in order to get the latest details straight from Lodge Tyres’ management.

Lodge Tyres has been located in its modern Stafford headquarters for roughly four years, having outgrown its earlier Birmingham headquarters. Initially, ULM’s call centre was based in the same Stafford building at the current Lodge HQ. However, since then ULM has moved to premises to a near-by street on the same science and technology park in order to facilitate the ongoing growth of the ULM fleet operation. Both moves are signs of the growth of the wider Lodge Tyres business, growth that has continued virtually unabated despite the Covid-19 pandemic.

So how did the pandemic and its connected lockdowns affect Lodge Tyres’ business? The most obvious impact is in the fact that about 50 per cent of the Stafford workforce (about 50 people) now operate under some kind of flexible working model. That’s no surprise, since (at the time of going to press) the government guidelines have continued to tell office staff: “if you can work from home, do work from home”. However, at the same time, many in the tyre sector can only keep going with the physical aspects of their business – especially those responsible for keeping commercial vehicles rolling. So, with the necessity of in-person technical work as well as the trend towards flexible office-based work in mind, what does the present and future look like for Lodge Tyres?

As far as headquarters-based personnel are concerned, “flexible working is going stay” Andy Christmas told Tyres & Accessories, describing Lodge Tyres as “still a hungry, happy, and progressive independent business”, language that emphasises the family-owned character of the business. For Christmas, such operational modifications needn’t come at the cost of the success of the business. On the contrary, flexible working – which for many at Lodge means remote working – has resulted in the same or greater levels of productivity. Moving forward, the next stage is the phased re-introduction of some office-based work in order to facilitate the teamwork and communications that come with such interactions, but for most this will only amount to one day a week initially.

As a result, the function of the headquarters is evolving from a building filled to capacity with nine-to-five personnel to a fluid workspace with some multi-purpose meeting rooms. One example of the efficiency improvements achieved with Lodge’s hybrid approach is the utilisation of Microsoft’s Teams video conferencing system for meeting regional representatives that are spread out across the UK. This saves time, fuel and other costs and means in-person meetings are more focused and productive when they do happen.

2020 sales flat, but profits and productivity up

But how has the business been impacted in financial terms? Before the pandemic took hold, Lodge Tyres achieved sales of more than £7 1 million in 2019. By comparison, the company’s relatively flat pandemic-hit turnover of £68 million in 2020 should be seen as a relative achievement – especially when you consider that the tyre market as a whole experienced something like a 25 per cent drop in sales during 2020 as a result of the pandemic, lockdowns, reduced miles driven and the MOT extension, amongst other factors. What’s more impressive is that company executives report that 2020 was actually more profitable than the previous year.

So what made the difference? Lodge Tyres’ 2020 experience is comparable with that of many businesses – the pandemic helped focus on what was really necessary and most productive, with the company tuning up a fair few of its operational practices as a result. The firm also consolidated how much product it held, reducing stocks from £8 million to £6 million.

At the same time, it is also worth pointing out that roughly 80 per cent of Lodge Tyres’ business operates in the commercial vehicle segment which faired very differently to the market as a whole and to the car tyre sector in particular. In short, the commercial vehicle tyre segment was more resilient overall and actually grew strongly in certain areas such as supermarket logistics and home delivery services.

All of this has set up Lodge and its associated fleet business for a better year in 2021 than it was achieved in the years before the pandemic struck. This in turn means the business’s cash position is considerably better than expected and, as a result, Lodge Tyres is well positioned for growth. Future development will take place via a combination of both organic and acquisitional growth, company executives told T&A without giving too many details of exactly what this means. However, with the company’s tyre retail and commercial vehicle servicing operations particularly well concentrated across what might be described as the middle of England, it is a fair guess that a portion of the growth will come from further afield and that the results will fill gaps within the firm’s existing footprint.

To be more specific, despite a strong business that currently services something like 10 per cent of the UK commercial vehicle tyre market, the company is ambitious about it future prospects and is aiming to increase this figure by 50 per cent and achieve 15 per cent market share during the next five years.

Of course, Halfords’ acquisition of McConnechy’s and Universal is undoubtedly a big and bold move on the part of the automotive retailer (see separate article for further details of Halfords’ business plans), but that doesn’t mean it is disruptive to ULM’s operations. Lodge’s management were clear that they will continue to operate as the independent partner they have always been within ULM. And, by all accounts, Lodge Tyres is successfully continuing on its current growth path as an independent family-owned business.