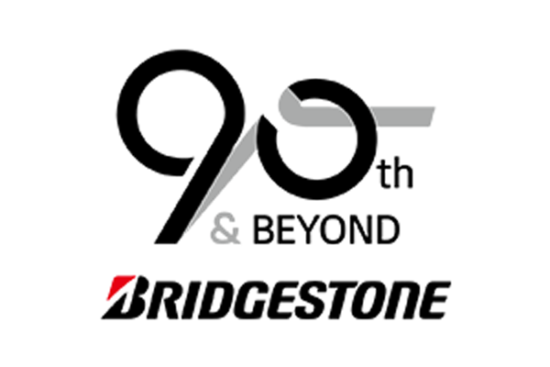 Bridgestone Corporation has released a new commemorative logo and webpage to mark the 90th anniversary of its founding. The company notes that as well as highlighting the anniversary milestone, the logo looks to the future that lies beyond. “It also expresses a commitment to pursuing innovation and swift progress while treasuring its connections with stakeholders.”

Commenting on Bridgestone’s commemoration of the anniversary yesterday, global chief executive officer Shuichi Ishibashi said: “Bridgestone has continued to overcome countless challenges, even in the face of uncertainty and turmoil, as it has proceeded to gain experience, learn, and grow into a stronger company.

“I have great appreciation for our customers, business partners, community members, and various other stakeholders who have supported Bridgestone throughout its long history,” Ishibashi continued. “We will continue to place sustainability at the core of our management as we advance past our 90th anniversary and seek to grow into a sustainable company together with society and customers.”

The Bridgestone Group has positioned the 90th anniversary of its founding as an important milestone as it advances toward its 100th anniversary and beyond. To commemorate the event, the company will be using various opportunities to communicate information on the Group’s history, its corporate DNA since its founding, and the initiatives that will be implemented leading up to the company’s 100th anniversary and beyond. These activities will be based on the theme of ‘90th and beyond.’ Through these efforts, Bridgestone aims to foster unity among employees while working to accomplish its vision of “continuing to provide social value and customer value as a sustainable solutions company toward 2050.”

A business that contributes will be forever profitable

Bridgestone says its founder Shojiro Ishibashi “believed strongly that a simple profit seeking business will never thrive, but a business that contributes to its society and country will be forever profitable.” It adds that the founding Ishibashi also believed an enterprise that does not serve society cannot last, a conviction the company says has been held since 1931. Later, in 1968, Bridgestone defined its corporate mission as ‘Serving Society with Superior Quality.’

“The company continues to pursue this mission, which serves as the bedrock grounding the actions of the approximately 140,000 Bridgestone Group employees around the world, even today,” states Bridgestone. “Based on this mission, Bridgestone has put forth its vision of ‘Continuing to provide social value and customer value as a sustainable solutions company toward 2050.’ The company’s Mid-Long Term Business Strategy is being implemented to realise this vision. With eyes to 2031, when Bridgestone will celebrate the 100th anniversary of its founding, the company will seek to grow into a sustainable company together with society and customers.”