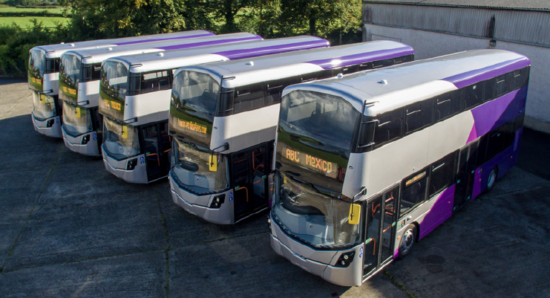 Northern Ireland-based Wrightbus, which produces the vehicles pictured, was amongst those represented in the letter (Photo: Wrightbus)

A cross-party group of MPs with bus manufacturing sites within their constituencies have written to the Prime Minister to demand the £3 billion he committed in February to fund investment in “at least 4,000 new zero emissions buses” is brought forward as soon as possible.

Robert Goodwill MP (Con) and John McNally MP (SNP), who both have Alexander Dennis sites in their constituencies, and Ian Paisley MP (DUP), who is the local MP for Wrightbus, have joined forces to call for what they say will be a “critical, potentially life-saving, boost for the industry, and will sustain and create thousands of jobs”.

Their calls follow pressure from the Hydrogen Strategy Now campaign, backed by more than 50 MPs and 40 businesses working in the hydrogen sector, which has urged the Government to commit to a clear strategy for the industry.

In the letter, the MPs urged funding to be utilised as soon as possible in order to support job security and creation across their constituencies and the wider UK.

“Buses are a vital pillar of local communities across the UK, particularly in rural and deprived areas,” they said. “However, with regular travel significantly reduced and social distancing measures curtailing capacity, the impact of COVID-19 threatens the future of the UK’s bus network. At worst, the current environment could put the industry at risk entirely and confront the Government with the choice between nationalisation or seeing thousands of routes cuts, and jobs lost in manufacturing sites in our constituencies.

“The Government must ensure that the bus system as a sustainable future as part of its plans for the UK’s economic recovery. The £3bn already committed for at least 4,000 zero emission buses will be a critical, potentially life-saving, boost for the industry, and will sustain and create thousands of jobs.”

The MPs call for the Government to include both hydrogen and electric buses in its plans.

They added: “We also want to see the Government be technology-neutral in its approach, ensuring a fair split between hydrogen electric and battery electric. As the Transport Secretary has noted, all three UK bus manufacturers make a hydrogen bus and we have stolen a march over international competitors in this technology. Urgent action to support growth in the production of hydrogen buses, such as via 2,000 UK made hydrogen buses as part of the 4,000 you have pledged, will allow costs to decrease and export potential to increase; creating more jobs and economic growth.”