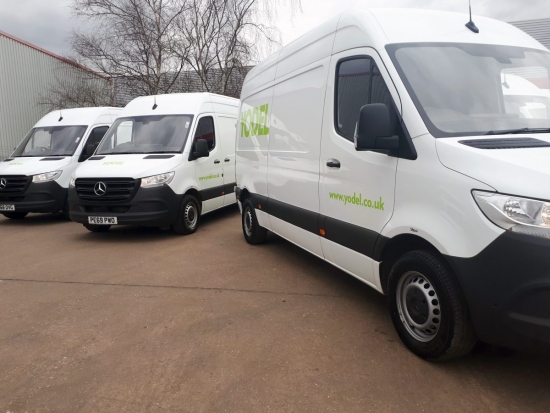 Independent parcel carrier Yodel is rolling out a new generation of tyres designed to maximise the safety and mobility of its delivery vans in all weathers, including on dry, wet, icy and snow-covered roads. The Michelin Agilis CrossClimate tyres will initially be fitted across Yodel’s fleet of 550 Mercedes-Benz Sprinters, directly supporting the firm’s ability to deliver on-time to every UK postcode. Their introduction forms part of a new three-year fully-managed Effitires contract with Michelin, which also covers Yodel’s 1,326 rigid trucks, tractor units and trailers – which will all continue to run on premium Michelin tyres.

Ian Leonard, head of fleet operations at Yodel, says: “Every year we deliver more than 145 million parcels, peaking in the build-up to Christmas when our drivers can face some of the worst weather conditions. Safe mobility is paramount to keeping our promises to customers, so when Michelin introduced us to its new Agilis CrossClimate tyres, we were keen to put them to the test.

“Following a series of trials, we knew we wanted them fitted as standard across our Sprinter fleet. We’re confident they will give us a genuine competitive advantage, backed up by the great service we’ve become accustomed to since switching to a Michelin contract three years ago.”

Andrew French, Michelin’s director of services and solutions for the UK, Ireland and Nordics, explains: “Yodel’s adoption of these tyres follows similar decisions taken by several major NHS Ambulance Trusts – where safe mobility 24/7/365 is essential, no matter what the conditions.”

Michelin Agilis CrossClimate have rugged tread pattern which features new rubber compounds to promote flexibility in cold temperatures. This performance has earned them Three Peak Mountain Snowflake (3PMSF) certification, confirming their suitability for use on snow-covered roads. The tyres also have enhanced sidewall and shoulder protection for improved robustness – making them perfect for vehicles on multi-drop delivery routes where there is an increased risk of kerb damage. Michelin adds that the tyre offers long-lasting performance and high mileage potential, supporting sustainability goals.

French concludes: “Yodel operates one of the hardest working fleets in the country, placing significant demands on its vehicles and tyres to deliver day-in, day-out. This was a fantastic contract to win three years ago, and we’re pleased to have retained the business on the back of our proven track-record and innovative new products.”

Michelin has appointed ATS Euromaster to supply and fit tyres across Yodel’s van fleet, and Tructyre ATS to support its heavier commercial vehicles. In Northern Ireland, A One Tyres looks after all of Yodel’s tyre requirements.