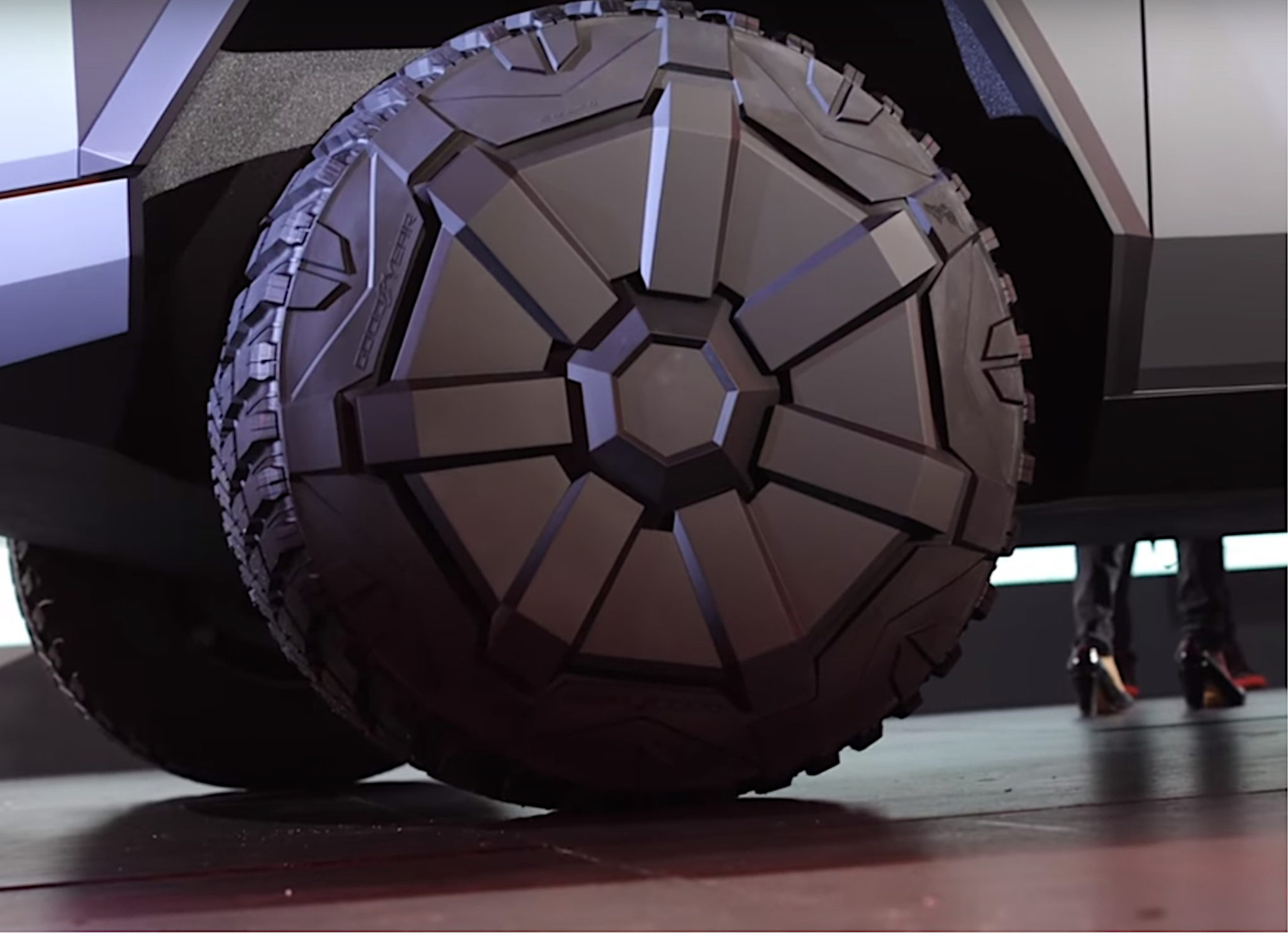 An angular variation of the Goodyear logo and the company’s wingfoot corporate identity are clearly visible on the CyberTruck tyre. Screenshot source: Marques Brownlee

During the last week Elon Musk and Tesla have been busily promoting their latest innovation – the Cyber Truck. The combination of its angular design and hugely powerful drivetrain will certainly turn heads. And, if the initial orders are anything to go by, it is set to be very disruptive in the growing SUV/pickup sector. Indeed, during the first 72 hours after the Cyber Truck’s launch 200,000 vehicles were pre-ordered – enough to put the Cyber Truck in the top 10 for annual US sales.

However, as always, we at Tyrepress are most interested in what keeps the vehicle attached to the road – its tyres. Like the rest of the vehicle, the tyres are visually remarkable. They featured a very rugged ATR or full-mud style tread design and appear to stick out from the wheel enclosures, something that is likely to be modified in order for the vehicle to pass compliance legislation.

Despite the off-road appearance, the tyres will have to have some significant torque and speed properties. According to Tesla, the tri-motor version of the Cyber Truck will be capable of 0-60mph in 2.9 seconds, which means its 35-inch wheels will certainly need W, Y or Z-rated tyres.

The wheels also feature neat wheel covers that appear to merge with the angular design of the tyres.

So who is supplying the tyres shown on the launch vehicle? After spending too long watching close-ups of the Cyber Truck’s wheel arches, we have discovered that Goodyear is responsible for the Cyber Truck’s chunky-but-fast tyres. Look closely and you can see that an angular variation of the Goodyear logo and the company’s wingfoot corporate identity are visible on the CyberTruck’s tyre sidewalls. So does this mean that Goodyear are OE on the Tesla Cybertruck. Not necessarily, they could have just supplied tyres for the launch. However, tyre makers generally work closely with OEMs in the development stage, so it is very likely the two US companies are working together. We contacted both Goodyear and Tesla for comment, but so far neither have confirmed or commented on our observations.