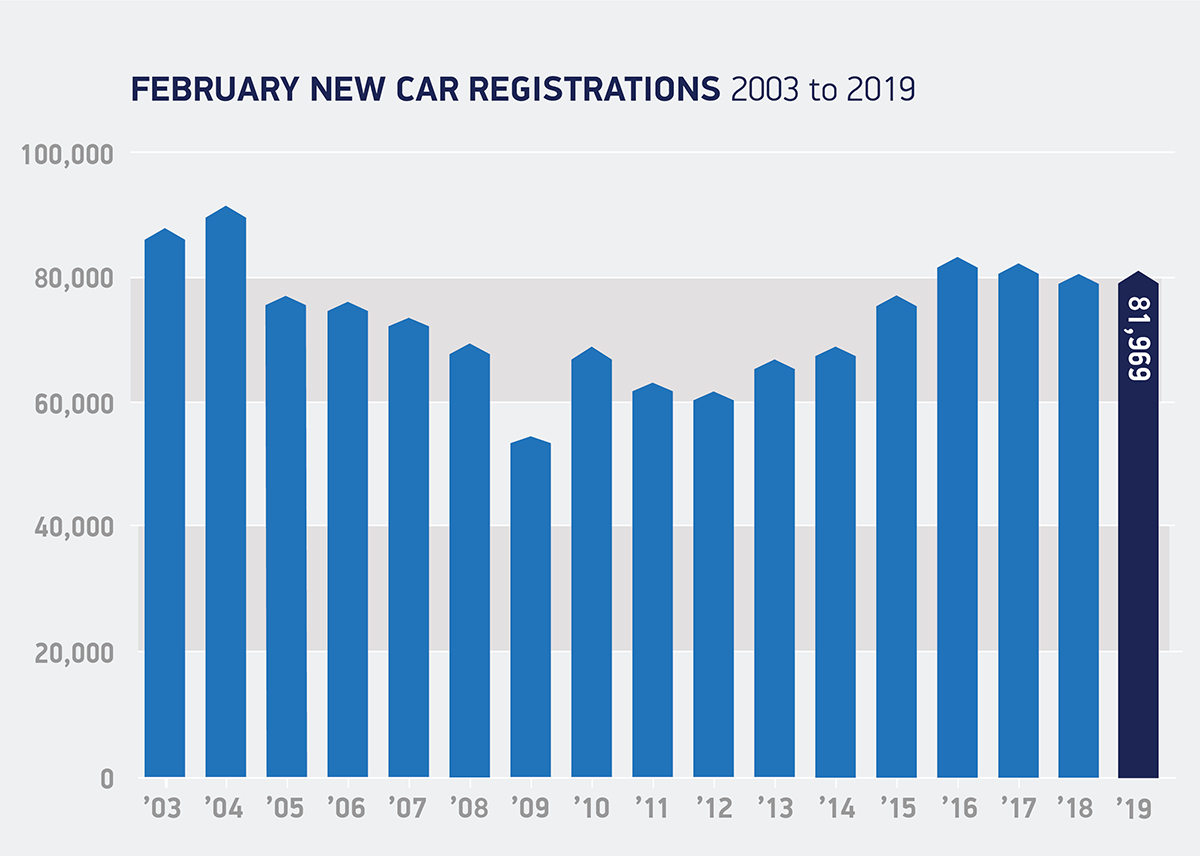 The UK’s new car market enjoyed marginal growth in February, up 1.4 per cent following five straight months of decline, according to the latest figures released by the Society of Motor Manufacturers and Traders (SMMT). 81,969 new cars were registered on UK roads in the month (a year on year uplift of 1,164 units), traditionally one of the quietest of the year, ahead of the crucial March plate change.

Demand for alternatively fuelled vehicles continued to surge, up 34.0 per cent and marking the 22nd consecutive month of growth for the segment as new and existing cutting-edge models attracted buyers into showrooms. Registrations of zero-emission electric cars enjoyed particular growth, more than doubling to 731 units, although they still accounted for less than 1 per cent of the market (0.9 per cent).

Meanwhile, in the four months since the October 2018 reform to the Plug-in Car Grant, the market for plug-in hybrid electric vehicles (PHEVs) has only grown by 1.7 per cent, compared with 29.5 per cent over the first 10 months of 2018. This suggests that removing the incentive for PHEVs is having an adverse effect.

Mike Hawes, SMMT Chief Executive, said, “It’s encouraging to see market growth in February, albeit marginal, especially for electrified models. Car makers have made huge commitments to bring to market an ever-increasing range of exciting zero and ultra low emission vehicles and give buyers greater choice. These cars still only account for a fraction of the overall market, however, so if the UK is to achieve its electrification ambitions, a world-class package of incentives and infrastructure is needed. The recent removal of the plug-in car grant from plug-in hybrids was a backward step and sends entirely the wrong message. Supportive, not punitive measures are needed, else ambitions will never be realised.”

The news came as vehicle manufacturers prepare to launch some 14 all-new electric and plug-in models to a global audience at the Geneva Motor Show. Already there are around 40 plug-in models on the market in the UK, with more than 20 more expected to arrive in showrooms in 2019.

Commenting on the latest SMMT figures, Sue Robinson, Director of the National Franchised Dealers Association (NFDA) which represents franchised car and commercial vehicle retailers in the UK, said: “The new vehicle market continues to perform in line with expectations, with sales up in February as private demand grows again.” Sales of petrol cars were up 8.3 per cent, diesel sales were down -14.3 per cent.Private demand increased by 4.3 per cent, while fleet was down -1.3 per cent.

“Sales of alternative fuel vehicles continued to grow significantly. We believe that, in the long-term, franchised retailers will benefit from the evolving marketplace not only in terms of sales but also in the aftersales sector.”
“We look forward to seeing what the market has in store for March which is the busiest month of the year for new car retailers and the biggest in volume terms due to the plate change”.