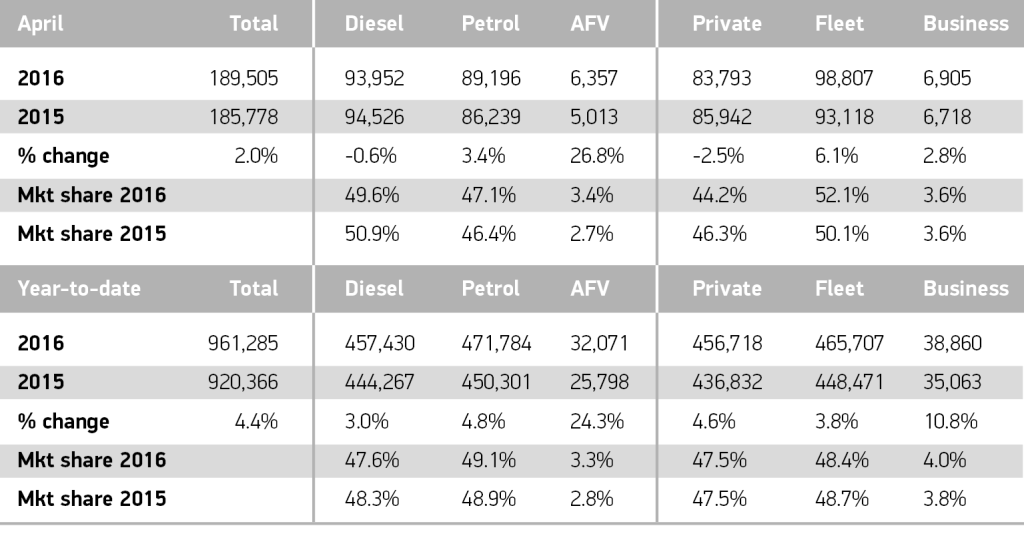 UK car registration figures show the market continues stable growth, despite an ongoing run of strong growth. New car registrations in the UK made a modest gain of 2 per cent in April, according to figures published today by the Society of Motor Manufacturers and Traders (SMMT).

As in March, the market growth in April was led by the fleet and business sectors, which were up 6.1 per cent and 2.8 per cent respectively. These growth figures counterbalanced a 2.5 per cent fall in private registrations.

Overall demand for both petrol and diesel models remains high. Registrations of petrol cars increased 3.4 per cent in April, while diesel saw a slight 0.6 per cent decline. Following the trend set in the first three months of the year, uptake of alternative fuel vehicles jumped by more than a quarter as buyers looked to reduce emissions and running costs.

April’s performance puts registrations for 2016 to date 4.4 per cent up on the same period last year. It follows a bumper March in which more than 518,000 cars were registered – the second-biggest month on record. Demand for cars has been running at a high level, after 43 consecutive months of growth in the market led to an all-time high of 2.63 million car registrations in 2015.

Mike Hawes, SMMT Chief Executive, said, “After such a strong March, April’s steadier performance was to be anticipated, and is in line with our expectations for the year. Consumer confidence remains high as buyers continue to capitalise on attractive finance deals, although this could be affected by political and economic uncertainty in the coming months.”