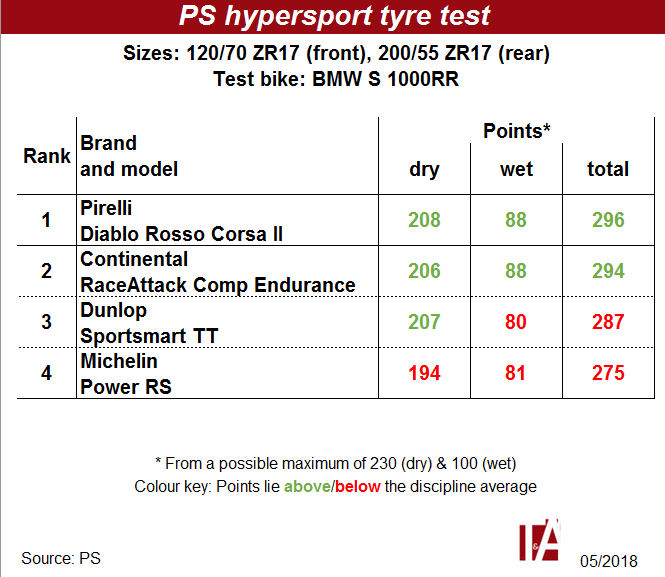 When presented late last year, the Diablo Rosso Corsa II was hailed as Pirelli’s “first tri-compound motorcycle tyre” for the road, a product developed using technology directly taken from the FIM World Superbike Championship. This provenance and compounding wizardly has now been scrutinised by German motorcycling magazine PS. The publication’s test team liked what they found.

A comparative evaluation of four hypersport tyres pitted the Diablo Rosso Corsa II against the Continental Race Attack Comp Endurance, Dunlop Sportsmart TT and Michelin Power RS. The quartet were each in turn fitted to a BMW S 1000RR and let loose on the Circuit d’ Alcarras in northern Spain. PS performed its dry testing there, with the nine criteria examined accounting for 230 of the 330 total points on offer. A further six tests in wet conditions were carried out on a dedicated wet weather course, with 100 points up for grabs.

Scoring a 296 from a possible total of 330 points, the Diablo Rosso Corsa II won the four-tyre test by a whisker. PS tester Volkmar Jacob reported that the Pirelli tyre “performed superbly in all conditions, is the best all-rounder and therefore deserves first place.” Earning top marks in the cold running and wet grip tests as well as good results in all other criteria, Jacob noted that use of three compounds in five distinct zones in the rear tyre resulted in rubber that provides both good mileage and strong grip when leaning into curves. “Swift as an arrow in both the dry and wet, it shows absolutely no flaws,” he commented.

Finishing just behind the Pirelli tyre with 294 points, the Continental RaceAttack Comp Endurance was lauded as a tyre for “real sport-lovers and connoisseurs.” In the wet, the Continental delivered pleasant surprises, providing top-class grip and feedback as well as performance when pushed to the limit. Jacob also found the RaceAttack Comp Endurance to have “real killer grip” when warmed-up, however this was only the case when the air temperature lay “significantly” above 10ºC; when driven cold at lower racetrack air pressure levels, he noted that the tyres felt “extremely wooden.”

Third place went to the Dunlop Sportsmart TT, which gained 287 points and showed its greatest strengths in the dry. “With the Sportsmart TT the test BMW rode brilliantly over the front wheel, turned in easily and met the desired line with subtle, laser-like precision,” commented PS. The Dunlop tyre also gave convincing performance in the other dry criteria, yet it showed some minor weaknesses in the wet, where it delivered noticeably less grip than its rivals. This wet grip also tailed off more abruptly.

Although it finished in last place, the Michelin Power RS showed no major weaknesses. Jacob commented, however, that it lagged behind the others in the dry. Nevertheless, the Power RS was praised for its stability. In the wet, the Michelin tyre delivered less grip that the best in test, and this grip didn’t tail off as smoothly. The Michelin Power RS received 275 points in total.

There must be a first- and last-placed tyre in every test, yet the real winner in this particular evaluation is arguably the consumer – PS notes that the gap between the various tyre makers has closed in recent years, something it considers a “brilliant development.” This closing of the ranks was reflected in the dry weather test results, where just two points separated the top three performers in these disciplines.