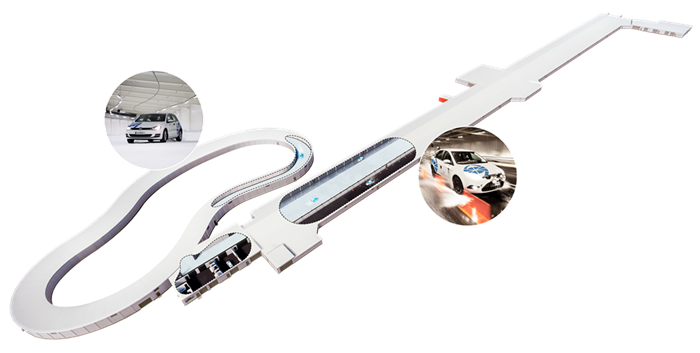 Well-known Finnish test centre Test World is expanding its year-round testing options. According to the company, this year it is more than doubling the length of the existing natural snow and ice platforms, and introducing asphalt tracks for wet and dry braking and aquaplaning, all under one roof. The new and extended indoor tracks will be opening from April 2018.

The wet and dry braking facility will open Test World to a new market, attracting customers who wish to test winter tyres on wet and dry surfaces as well as on snow and ice. The length of the extended facility will allow Test World to test braking on passenger cars at higher speeds than possible in the existing space. The adjustable temperature and humidity will give an advantage to development, certification and labelling testing for tyres by allowing greater environmental control.

Once complete, this remarkable laboratory will provide the majority of objective tests required by tyre manufacturers at one facility, year-round. The results of tests conducted indoors on natural snow at Test World are said to be comparable to outdoor results, and so tyre manufacturers now have more of an appetite for such tests. New garages will be added as part of the expansion to support the increased number of tests.

The continued expansion of the facilities at Test World is a priority for Millbrook. It strengthens the group’s position as a world-leading tyre and vehicle testing provider, as well as enabling it to save customers time and money by offering more services at a single location.

“This expansion is something our customers have been asking us for and we are pleased to confirm such ambitious plans for extending our current facilities,” said Janne Seurujärvi, managing director, Test World. “The investment will strengthen our position as the world’s leading tyre testing site for cold temperature testing. The new capabilities will allow us to provide a fuller service to our current and prospective customers, ultimately saving them time and money by providing more services on a single site.”

“Test World is already an immensely popular site, providing cutting edge testing facilities and services to tyre manufacturers, and a key part of Millbrook Group’s offering to the market. We expect this news to be warmly received by our customers, who look to our engineering expertise to complement their testing and development requirements,” said Alex Burns, president of Millbrook.