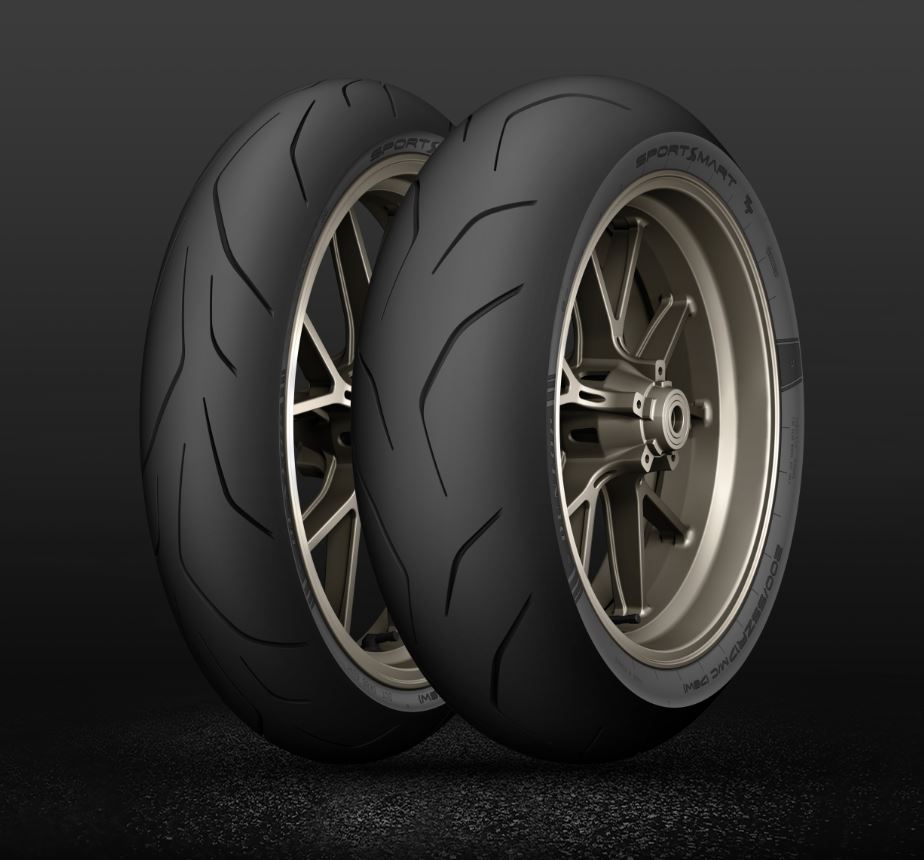 A fourth product enters the Dunlop hypersport tyre portfolio this year. This is the SportSmart TT, a tyre derived from Dunlop’s road-focused SportSmart Range. Adventure riders receive a ‘Max’ successor to the TrailSmart.

Developed to “meet the needs of riders with the very latest sports bikes and performance roadsters who want to use the same tyre on track and for road riding,” the SportSmart TT completes Dunlop’s 2016-announced new approach to the segment, which involves a redefinition of its range around the goal of a ‘tyre for every rider’.

The addition of the letters ‘TT’ behind the SportSmart name denote the application of ‘Track Technology.’ With the tyre’s launch, Dunlop returns to a segment of the market where it last competed over a decade ago with the Qualifier RR.

For its numerous competitive appearances, including at the Isle of Man TT Superbike and Senior races and the FIM Endurance World Championship (both the Bol d’Or and Le Mans 24h races), Dunlop developed a new motorsport polymer that offers greater grip and durability. A version of this has been used in the SportSmart TT. Dunlop describes it as a “race compound that is proven to provide consistent performance and a versatile operating range” – qualities that are “vital for combined road and track use.”

To optimise the SportSmart TT contact patch, Dunlop used an evolution of its NTEC technology. The new NTEC RT technology allows a tuning of rear inflation pressure to maximise the footprint on track days. It allows riders to keep the standard manufacturer pressures for road use, but increase the contact patch by up to 24 per cent when riding on track.

“These two technologies are key to the performance of SportSmart TT,” states Andy Marfleet, marketing manager at Dunlop Motorcycle Europe. He also teases about what the tyre’s launch will bring: “When the tyre is fully unveiled in March 2018, we will reveal two additional technologies. The combination of these four innovations have resulted in the birth of a tyre which creates a niche of its own in the Dunlop hypersport portfolio. With four new tyres in the hypersport sector, we now truly have a tyre for every type of rider – whether on road or track.”

Marfleet comments that “no other tyre manufacturer has completely replaced every tyre” in its hypersport portfolio in the last year. He shares that Dunlop has “the youngest and most innovative range in the market after an intensive year of launches.” In addition to the SportSmart TT, in the past year Dunlop has launched the following hypersport tyre lines:

GP Racer D212 – Launched January 2017, this is a tyre for seasoned track riders.

SportSmart2 Max – A tyre for road riders who occasionally ride on the track. Launched March 2017.

The launch of four new hypersport tyres within the space of 12 months shows, says Marfleet, Dunlop’s “focus on developing new technologies that benefit every type of hypersport rider” and proves “our agility in transferring race winning learnings into our range quickly and effectively.”

The Dunlop TrailSmart has been replaced in key sizes by a successor tyre, the TrailSmart Max. In addition to building upon the previous-generation tyre’s wet and dry grip characteristics, Dunlop Europe says new technologies have been used to improve the TrailSmart Max’s handling and durability. Dunlop Europe launched the original TrailSmart in 2015, and the tyre gained praise from French motorcycling publication MotoMag for its wet and dry handling performance. When testing the TrailSmart, MotoMag awarded the Dunlop tyre the maximum five stars in both these categories. Dunlop Europe comments that the TrailSmart was the only trail tyre to gain full marks from MotoMag for these disciplines, but is quick to point out that it has “not rested on its laurels” since then. The need to design tyres to suit the new, higher-powered motorcycles being launched within the sector coupled with Dunlop’s focus on developing new technologies to set class leading handling and mileage performance has resulted in the TrailSmart Max.

The TrailSmart Max features rayon material in the ply construction. This, says Dunlop Europe, gives more precise steering, and when combined with Dunlop’s JLB (Jointless Band) construction gives a quicker warm-up, and much more progressive behaviour in a variety of temperatures and conditions.

But that’s not all: Dunlop Europe says this enhanced construction, combined with a new front profile, adds the benefit of hugely improved durability. In internal testing against the TrailSmart, the new front tyre (size 120/70R19) was shown to perform for 64 per cent longer than its predecessor. Dunlop Europe comments that this result confirms its “strong reputation for durability and endurance seen in other sectors with RoadSmart III and SportSmart2 Max.”

Andy Marfleet, motorcycle marketing manager EMEA, believes the TrailSmart Max represents a significant leap forward in the sector: “The TrailSmart is a five-star tyre, but we felt that we could also apply new technologies that had been proven in other sectors. We have managed to retain the segment-leading wet and dry handling performance, but also achieve a significant improvement in mileage. Our ‘stronger for longer’ philosophy, proven in the RoadSmart III, focuses on enduring performance, ensuring that the tyre performs throughout its life. The combination of new construction with rayon plies, a new MultiTread rear compound and the distinctive xGT tread pattern means that TrailSmart Max provides strong no-compromise performance for the most demanding adventure bike riders.”

Significantly, the TrailSmart Max is available in sizes that are designed for the latest models in the sector. For example, the BMW R 1200 GS liquid cooled version (120/70 R19 and 170/60 R17) is now available, and for the water-cooled version, Dunlop has introduced the (110/80 R19 and 150/70 R17) The Honda Africa Twin is also a popular choice in the adventure segment. Dunlop has optimised the 90/90-21 and 150/70 R18 combination to perfectly match this model. “The emergence of exciting new models in the adventure sector gave us the opportunity to tune our latest TrailSmart Max to the specific demands of these bikes” adds Marfleet.