Michelin has announced plans to convert part of the site of its closing Northern Ireland manufacturing plant to a business park following its sale to Silverwood Property Developments. The tyre manufacturer will complete the closure of its Ballymena plant in June, after the last tyre rolls off its production line in April, ending 50 years of manufacturing. Some of the site – reportedly around 10 acres – has been earmarked for Mid and East Antrim Borough Council, as it attempts to win its bid to host a regional Heathrow Logistics Hub, supporting proposed construction work at the West London airport.

Factory manager John Milsted told the BBC that Michelin believes it has “got a good secure future for the site”. He also expressed sadness that the company was to leave Northern Ireland, saying the region “has been very kind to us.”

Silverwood Business Park Limited representative Darren Costello told the Belfast Telegraph that the company is “looking forward to developing the premises into a mixed-use business park and bringing jobs back to the site.”

Meanwhile the mayor of Mid and East Antrim, Councillor Paul Reid thanked Michelin for honouring its “commitment to an extended… run-down period” with a focus on supporting employees. He added: “We would also like to thank them for brokering a deal which sees the council being gifted 10 acres of land.”

Another political representative, the DUP’s Ian Paisley MP, who represents North Antrim, added his pleasure at the news in a series of tweets. However, one message stood out for its illustration of the importance of context when quote tweeting: 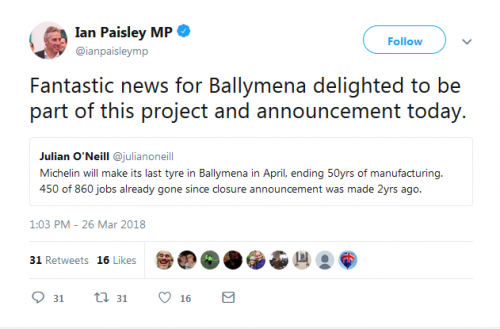