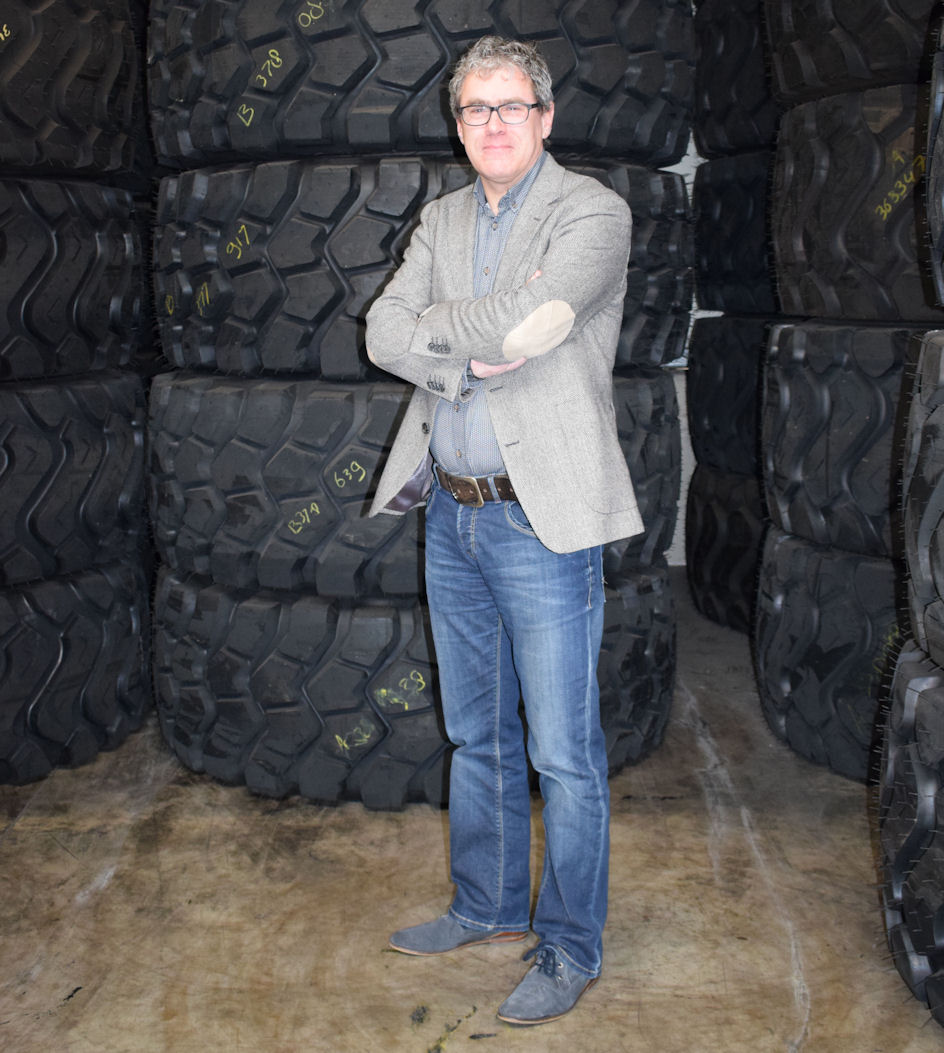 While spent revellers slept or nursed New Year’s hangovers and the well-meaning scribbled out resolutions they’d struggle to keep for a week, let alone a year, on 1 January Obo Tyres began something more significant. The first day of 2017 was also the Dutch retreader’s first as member of the Magna Tyres Group. The acquisition of Obo was announced shortly before the festive season got under way, and the new arrangement enables Magna, a specialist in the field of new off-highway and truck tyres, to offer its range as a full lifecycle portfolio. The benefit to Obo Tyres is measurable in terms of access to new markets, improved casing supply and the opportunity to develop new and qualitatively superior products.

Less than a month after Obo Tyres’ entry into the Magna Tyres Group, Tyres & Accessories met up with general manager Peter Schrijver to find out what has changed for the retreader of late. The answer was both not a lot, and quite a bit: On the surface it was business as usual within Obo’s mould cure and pre-cure retreading facility, but beneath the surface the opportunities accompanying the new owner were easy enough to see. Another change of note was, of course, Schrijver’s very presence at the Hardenberg, Netherlands site.

In tyre circles, the name Peter Schrijver has been inseparable from the Vredestein brand for almost three decades. He’s worked for the Dutch tyre maker in its various guises – state ownership, acquisition by private investors, in partnership with Russia’s Amtel and as part of Apollo Tyres – for most of the past 29 years. His most recent position of product manager for agricultural and industrial tyres is one he held for some 11 years, and he may have still served in this capacity today had Apollo Vredestein not relocated a number of non-factory positions from Enschede to its new headquarters in Amsterdam. Rather than move to the Dutch capital, Schrijver parted ways with his long-time employer, preferring to stay in the northeast of the country for family reasons. At the start of October, he joined Obo Tyres as commercial manager, however before the month was over his business cards were already in need of updating.

“Frederik Zandman, who held the position of operations manager, left the company in October,” explains Schrijver. “My experience in the agricultural tyre segment made me a good fit for this job, and instead of looking externally I took on the role in addition to that of commercial manager.”

Schrijver’s first contact with Obo Tyres’ then-owner Herman Hutten (who now acts as an advisor to the company) and the start of his career with the retreader occurred prior to the change of ownership, and he comments that an acquisition wasn’t even on the table at the time. “Obo is a Magna agricultural tyre dealer and distributes the MTP brand in Benelux, yet although Magna had been looking to acquire an off-road tyre retreader for a while there wasn’t any takeover-related activity.” Negotiations were initiated by Magna in November, their motivation to buy Obo Tyres coming from a desire to provide a total package for OTR/industrial and agricultural – new, retreaded and used tyres: “Magna Tyres’ intention now is to offer a one-stop shop.”

It’s still early days for Obo Tyres’ integration into the Magna Tyres Group and the new owner isn’t ready to share how it intends to coordinate Obo retreads with its existing portfolio of new industrial, OTR and agricultural tyres. We’ll have to wait a little longer to see exactly what Magna Tyres has in mind. In the meantime, Magna and Obo are working to integrate their respective sales teams. “The retreading business is quite different to new tyres, so we have to focus on giving Magna’s salespeople the tools and knowledge they need for working with a product portfolio that now includes retreads,” comments Schrijver.

In addition to sharing knowledge, the two firms intend to coordinate their marketing and communication. Logistics is another potential synergy now under the magnifying glass. Many Obo customers are also Magna customers, and the larger, combined volume of tyres the companies will ship can be leveraged to gain a better price per tyre with third-party logistics firms. These same hauliers can also be used to bring much-needed casings for Obo Tyres’ retreading.

“For us as a retreader, we require casings and in turn need to bring retreaded tyres into the market,” observes the new general manager. “Magna’s distribution network will help us obtain casings.” He reports recent difficulties in procuring suitable casings in certain sizes. The reason for this? There are too many tyres on the market with casings that don’t meet the standards required for retreading. “Very cheap, low-budget Asian imports entice end users to look at low purchase price instead of cost per hour, but we can’t retread these tyres. It is frustrating for us – the manufacturers of these products would benefit if they worked hand-in-hand with retreaders, as a new tyre with a retreadable casing is more attractive to end users.” Putting aside his wish for a better working relationship with new tyre makers, Schrijver expresses hope that rising prices for raw materials – a phenomenon that blunts the competitiveness of those manufacturing low-end new tyres – will lead to a noticeable decrease in the number of non-retreadable casings entering the European market during the course of 2017.

Peter Schrijver, incidentally, looks forward to a steady supply of Magna casings entering the Obo retreading facility, however he accepts that patience is required: “We’ve already had some Magna casings in our plant and they were very good, there were absolutely no issues with them. We’re expecting to see a lot more, but it may take a couple of years before we receive Magna casings in any great number.”

Schrijver also looks forward to growth in Obo’s geographic zone of activity: “While Obo Tyres has mainly focused on the Netherlands, Germany and northwest Europe, Magna Tyres is also present further afield. For instance, Magna possesses a sales operation in Poland. This is a big agricultural and OTR market and maybe for us a gateway to the rest of Eastern Europe.” Magna Tyres also has dedicated sales staff in France and contacts in southern Europe, and Schrijver even sees Obo’s acquisition as an opportunity to gain a higher profile in the UK. “The UK will remain a part of Europe even when it leaves the European Union, and therefore comes into our zone of interest. We haven’t sold much product there in the past – just some popular sizes and used tyres – and we’ve only earned a small turnover in the UK. However the potential to grow exists. Magna is a fast-expanding company.” Magna’s larger network offers Obo Tyres scope to grow, but this latent opportunity hasn’t turned the retreader on its head. Day-to-day operations continue as before, customers will still deal with a separate entity named Obo Tyres, and the offices, plant and workforce in Hardenberg will remain. Existing retread product ranges, including shoulder retreading for agricultural tyres, and tyre repair services will continue to be Obo staples, and new product lines will ensure the ongoing evolution of the Obo Tyres portfolio. One such line is rubber tracks.

“We’ve developed a new machine for producing rubber tracks, and this equipment is now complete,” shares Peter Schrijver. At the time Tyres & Accessories visited Obo in Hardenberg, an early production batch of tracks were being tested in the market ahead of a commercial launch in the first half of February. “The season for this product – the tracks are mainly fitted on harvesting machines – starts in late spring, and we’ll be ready for that.”

The range of new tyres on offer through Obo will also remain the same, even though the Techking brand, which the company has sold exclusively in Germany, France, Switzerland and Austria since February 2015, competes against Magna products for market share. Schrijver confirms that the current won’t change for the time being.

He points out that the Magna Tyres Group has its own OTR, industrial and truck tyre wholesaler, Universal Tyre Trading. “They’re based in Waalwijk, the Netherlands, in the same location as Magna, and distribute several premium tyre brands. It’s very feasible that Techking could become a part of the Universal Tyre Trading portfolio. Techking is a competitor for the Magna brand, but we have built up customer relationships with the Techking product. We need to find a good way to combine the two brands.”

While much will remain the same at Obo’s facility in Hardenberg, this ‘same’ will be on a larger scale. Schrijver anticipates that the plant’s output will rapidly increase from its current level of about 20,000 retreaded tyres a year, with mould cure retreads accounting for much of this growth. “We are now in discussions with various parties. The future looks good, we’re very optimistic.” Investments in new retreading equipment will soon take place, and space has already been found for the machinery: “We’ll reconfigure how equipment is set up within our plant, and also gain some square metres of space as part of our existing warehousing will go to the Magna site in Waalwijk. We can sell from Waalwijk stock.” The general manager also considers the addition of a further production shift a “serious option” for accommodating the anticipated higher output. These changes will be implemented in 2017.

Although mould cure retreading will account for much of Obo Tyres’ future growth, the pre-cure process isn’t being neglected

Going forwards, the intention is not only to increase output and employee headcount; Schrijver wants Obo Tyres to offer a broader, qualitatively better product portfolio. To this end, the company will benefit from both the new parent’s input and from Schrijver’s experience.

“I foresee a lot of opportunities opening up,” Schrijver states. “It’s not only about new profiles or new products like the track; opportunities also exist in compounding.” Magna Tyres Group chief executive officer Michael de Ruijter, who founded the firm in 2006, has a family background in the rubber industry. De Ruijter International’s rubber company, DRI Rubber, is headquartered in Waalwijk, and Peter Schrijver shares that Obo Tyres now “has the opportunity to develop compounds with the team at DRI Rubber.” He foresees that Obo “could become very innovative in compounding through access to a larger pool of knowledge within the Magna Tyres Group,” however he stresses that changes will only be made to the compounds chosen for Obo Tyres’ retreading if they improve product quality.

After working in various disciplines within the tyre industry, including product development, Peter Schrijver also has ideas he’d like to see realised at Obo Tyres. “I know what end users want, that’s something I’ve gained a feel for by being in the market for 29 years.” While he doesn’t want to give too much away at this point in time, he comments that he sees “good opportunities to do something new.”

During his months at Obo Tyres, Peter Schrijver has witnessed significant developments within the company, and he is ready for more. “The last few months have been a rollercoaster, and I mean this in the most positive way,” he states. “I came to Obo from a very large company, and although much smaller, we have a great, all-round team here. A team that is highly motivated to initiate every necessary action. Things get dealt with here, and quickly.” stephen.goodchild@77.237.250.82