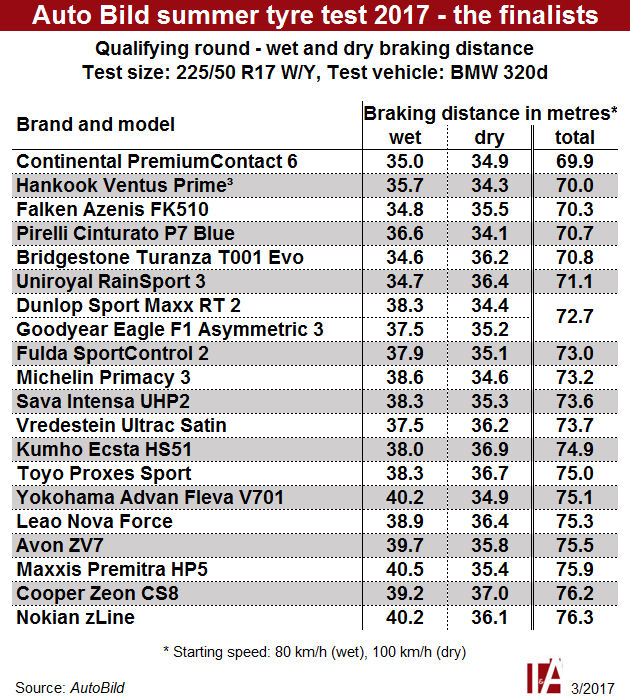 As in previous years, Auto Bild has separated the wheat from the chaff in its 2017 summer tyre test with a qualifying round. This year, the original 52 candidates were whittled down to 20 finalists through wet and dry braking tests.

The size 225/50 R17 W/Y tyres were stopped on a wet road surface from 80km/h and on a dry surface from 100km/h. A Continental tyre, the new PremiumContact 6, achieved the best overall result with its combined braking distance of 69.9 metres.

The braking distances for 12 candidates, on the other hand, were considered simply too long by the Auto Bild test team. These tyres, which had combined braking distances of between 81.5 and 88.7 metres, where the Nordexx NS9000, Delinte DH2, Rovelo RPX 988, Kleber Dynaxer HP3, EP-Tyres Accelera Phi-R, Radar Dimax R8, Formula Energy, Zeetex HP 1000, Tristar Sportpower Radial F105, Achilles 2233 and Autogrip Grip200.

The winner of Auto Bild’s comparative test will be announced in the magazine released on 10 March.

Bridgestone to increase consumer tyre prices 8% across all brands