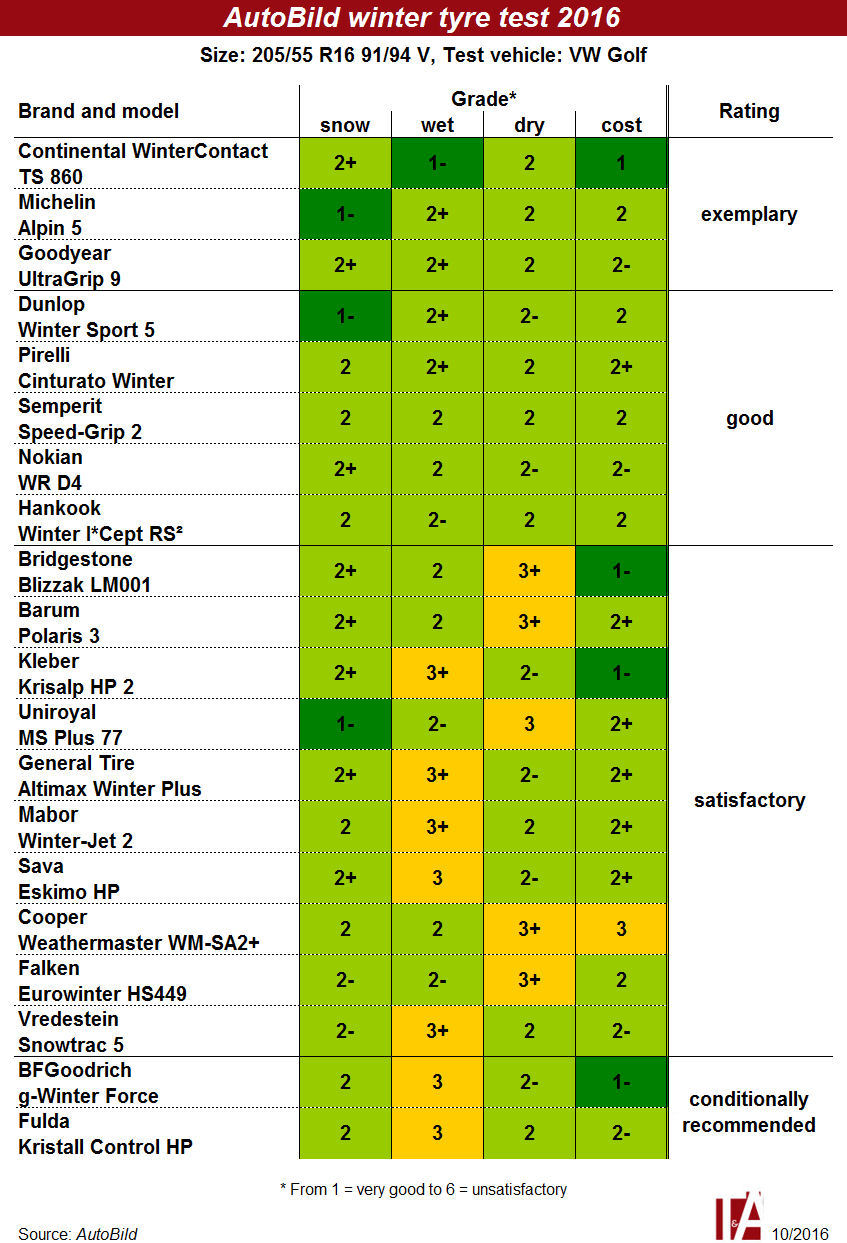 Following a qualifying round that saw 30 candidates eliminated on the grounds of their wet and snow braking performance, German motoring magazine Auto Bild has now published the results of its 2016 comparative evaluation of winter tyres.

The 20 finalists in the size 205/55 R16 test include three that gained the top rating of ‘exemplary’; these are the Continental WinterContact TS860, the Michelin Alpin 5 and Goodyear UltraGrip 9. The podium-placed trio were followed by five tyres with a ‘good’ rating, the Dunlop Winter Sport 5, Pirelli Cintuarato Winter, Semperit Speed Grip 2, Nokian WR D4 and Hankook I*Cept RS². A further ten were rated as ‘satisfactory’ and two products – the BFGoodrich g-Force Winter and Fulda Kristall Control HP – were only considered ‘conditionally recommended’.

“An exemplary tyre without faults or flaws” – this was the high praise the Auto Bild testers heaped upon the winning Continental tyre. Characteristics singled out as highlights include the WinterContact TS860’s dynamic handling qualities in all weather conditions, its precise, responsive steering behaviour, as well as efficiency. The second-placed Michelin tyre also left a good impression even though it was considered “quite expensive”; the Alpin 5 was found to have the best characteristics in the snow, stable wet and dry handling, short braking distance in the wet and low exterior noise. Goodyear’s UltraGrip 9, the third ‘exemplary’ tyre, was commended for its convincing driving characteristics on snowy and wet surfaces, as well as for having a high safety reserve during aquaplaning and low rolling resistance, however its mileage was considered “only average.”

These top three tyres were relatively free from drawbacks, however each of the remaining 17 products were compromised in some respect, and this was reflected in their failure to achieve the top rating. The Dunlop tyre could only deliver “average driving dynamics on dry road surfaces,” the Pirelli offered less than optimal lateral control on dry surfaces, while the Semperit Speed Grip 2 was criticised for displaying “spongey handling on snowy road surfaces.” The Nokian WR D4 was marked down for its merely average lateral control in the dry and less than optimal mileage, while the Hankook tyre was found to deliver undistinguished lateral control on wet surfaces and slightly too long a wet braking distance.

The ‘satisfactory’ Bridgestone Blizzak LM001, which occupied ninth place out of 20, was marked down for understeer on dry roads and too long a dry braking distance, while the Barum Polaris 3 was said to have “restricted levels of grip and delayed steering response on dry roads.” The other side of the coin for these tyres were good winter/snow characteristics and convincing behaviour in the wet, such as during aquaplaning, as well as efficiency and value for money.

Eleventh place was jointly held by the Kleber Krisalp HP2 and Uniroyal MS Plus 77, and while the first of these primarily displayed weaknesses on wet surfaces, the other was less than optimal in the dry. Neither tyre, nor those finishing further down the table, displayed any significant weakness in the snow. Generally, these tyres’ performance differed the most from that of the top-ranked tyres in the wet disciplines.