ETRMA tyre sales up 2-3 per cent 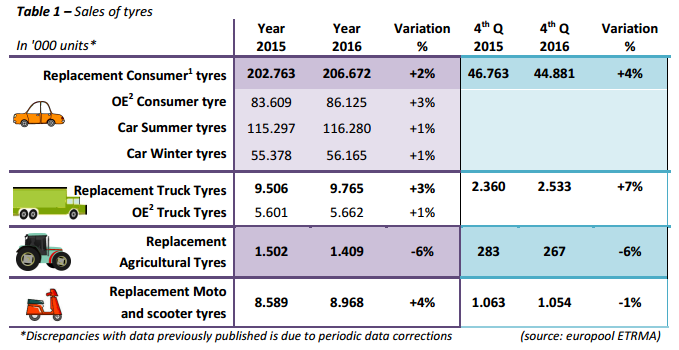 On 23 January the European Tyre and Rubber Manufacturers’ Association published its members’ sales for the year 2016 and the last quarter of 2016.

Consumer tyres were up 2 per cent in 2016 – despite minor fluctuations during the third quarter and with a strong performance in the last quarter (+4%). OE consumer tyres sales followed the performance of new car registrations, albeit it more slowly, rising 3 per cent.

For the truck tyre segment, the total 2016 sales were positive (+3%) for the fourth year in a row and sales were particularly good in the fourth quarter (+7%). The OE truck tyre market also grew, in line with sales but only slightly.

Sales of motorcycle and scooter tyres were up 4 per cent by the end of 2016.

Agricultural tyres sales continued to experience, a consistently negative trend, down -6 per cent during 2016.

“All in all, the outcome of 2016 is in line with the expectations and normal for a mature market” said Fazilet Cinaralp, secretary general of ETRMA: “for 2017, it is difficult to hope for a greater growth, especially given the continuous growth of imports, which will be confirmed also for 2016”.