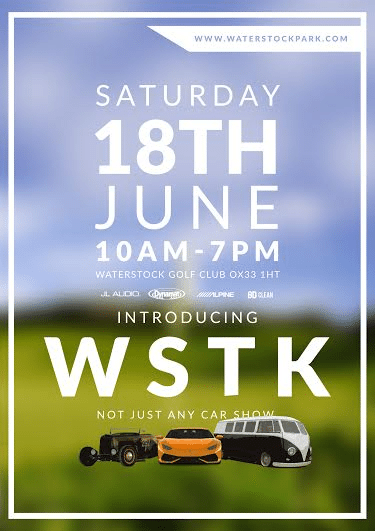 Celsus, the European distributor of Dynamat, has announced its sponsorship of the UK’s first ever Waterstock Show, taking place on 18 June at Waterstock Golf Club, Oxford. As part of Celsus’ extensive programme of events throughout 2016, the Waterstock Show will provide an opportunity for people to interact with the Dynamat product range in person.

The event looks set to be a lively family day out, with club stands featuring a broad selection of German vehicles, Hot Rods, JDM, Drags, Classics and Supercars. Live DJ sets throughout the day will keep the atmosphere fully charged, and trade stalls will boast an array of amazing automotive bargains. There are also tattooists and body piercers on site for especially daring visitors.

“Being a petrol head and hearing the name Dynamat everywhere growing up, it was an honour and a privilege when we heard that this huge car brand wanted to get involved in our show,” said Waterstock’s Smuj Singh. “As brand leader in its field it has opened many doors for us and cemented relations with lots of well-known car clubs throughout the area. We are now recognized as being the main car event in Oxford, and all of this has happened in such a short time with the support of Celsus.”

Commenting on the sponsorship, Mark Baker, marketing director of Celsus UK, said: “We think that the SoScene team have a brilliant concept on their hands with this event. They’re working incredibly hard to promote the UK’s aftermarket scene, and we’re delighted to be associated with this kind of innovation. Building recognition for events like this is key to driving the market forward.”